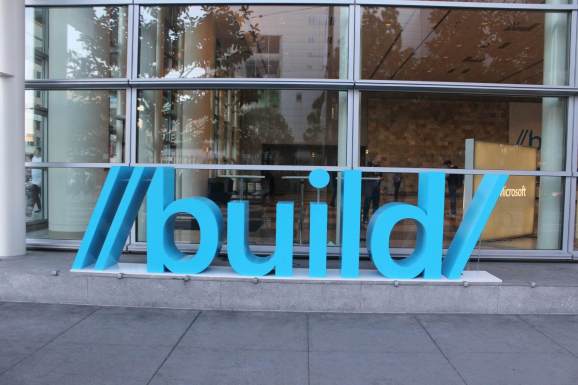 At the 2016 Microsoft Build conference in San Francisco.

For the past two years, Microsoft has hosted its Build developer conference in Seattle, rather than in San Francisco. Three is a trend: The company today announced that Build 2019 will once again return to the company’s home state of Washington, scheduled from May 6 to May 8, 2019. Registration opens on February 27.

There was a big problem last year, however, and it wasn’t the location. Microsoft’s Build overlapped with Google’s I/O developer conference (May 7 to May 9 versus May 8 to May 10). This caused headaches not just for publications like VentureBeat that cover both events, but, more importantly, developers who wanted to attend both. Many Windows developers are of course also Android developers.

Google and Microsoft didn’t get the message — 2019 will be the same. Google scheduled I/O 2019 for May 7 to May 9 in Mountain View and now Microsoft has overlapped with those dates exactly in Seattle. (Google hosts its event at its headquarters, but Microsoft prefers the Washington State Convention Center in Seattle rather than its headquarters in Redmond, likely due to facility constraints.)

In 2019, Microsoft will undoubtedly talk AI, Cortana, Windows 10, HoloLens, Visual Studio, .NET, Azure, Xbox, and everything in between. We expect an emphasis on Edge and Chromium, in particular. There will also be a few surprises, as is typical with such conferences.

Microsoft has many other events throughout the year, including Microsoft Inspire for partners and Microsoft Ignite for business and IT leaders. Build is the biggest, however, targeting developers and anyone else interested in the latest and greatest from the company.

The event attracts developers from all around the world and is always chock-full of news. Here is a recap of what happened last year: Everything Microsoft announced at Build 2018.

As always, the full Build schedule is still in the works. Pricing should be $2,495 per attendee, as in past years. Once tickets go on sale, they’ll sell out in either minutes or hours, depending on whether there are any technical difficulties.

VentureBeat will be on site covering the news live.