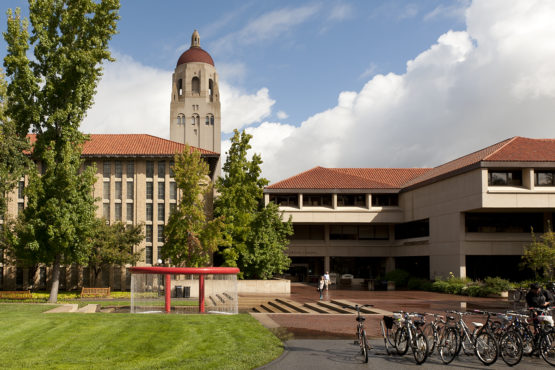 Above: Stanford University Green Library against a cloudy sky with Shumway Fountain in the foreground and Hoover Tower in the background.

VentureBeat: How do you think it’s going to be different from things like the Computer History Museum?

Lowood: We’ll never be a museum in that sense, where we have this destination and permanent exhibit that people come to see with artifacts from the entire history of computing. Our main mission is providing access to research materials. It’s not exhibition. We like to do exhibits and that’s great. It helps people understand more about what we have, and we express things through the exhibits. But it’s not our primary mission like it would be for the Computer History Museum.

We work with them on different things. We’ve collaborated in the past on specific projects. Often their staff are here when we have activities around digital preservation, things like that. We’re really aware of what the Computer History Museum does and the value of it. But I see us more as intersecting and collaborating, not really as competing.

VentureBeat: How many people have full-time jobs on this?

Lowood: When we get fully up and running, which should be fall of 2020, we’ll have the two curators, Leslie and me, curator and historian. It looks now like we’ll probably have two additional staff positions. We haven’t figured out exactly how we’re going to arrange that. The beauty of an endowment is that it grows over time. In 20 years, there may be more positions. There may be others who want to further support what we’re doing.

VentureBeat: Who are some of the interesting figures that have been giving you their papers or records? Who do you already have?

Lowood: You can look up the Silicon Valley Archives on the web to see all we have. We have now about 400 collections. More recent ones we’ve received — we just received the papers of John Perry Barlow, who was the founder of the Electronic Frontier Foundation. People who know about him will know he was also one of the songwriters for the Grateful Dead before that. That’s one area we’re interested in, the discourse around digital, around the legal issues of intellectual property, all those things the EFF has been involved with.

We recently received the papers of somebody I bet you know, Evelyn Richards. That’s really interesting because of the work she did tracking technology in the Valley, particularly Apple. It connects with the Apple collections. We have quite a few papers of journalists here who have covered technology specifically.

Another one we got recently, in the last year or two, the papers of Kathleen Hennessey, who was a Stanford student. She worked at Ampex in the ’50s and had one of the most interesting careers I know of in the technical areas of the semiconductor industry, manufacturing, industrial engineering, and the application of information technology. She was a professor at Texas Tech. She’s retired now. It’s a really interesting career of a woman in these industries and all the work she did. We want to start broadening our perspective on who worked in Silicon Valley, who contributed to it. From that point of view, this was a very important collection.

It’s voluminous. She kept everything. We love people who do that. She worked on all kinds of projects, research to commercial projects, even some military projects. We have all that documentation. But that’s just a couple of recent things that give you a sense of what we’re interested in, some of the diversity.

VentureBeat: People should start thinking about how to preserve their papers.

Lowood: And companies too. VentureBeat is something of the Valley, right? It doesn’t mean we have to make things public right away, but there’s a history to VentureBeat, a history to the evolution of reporting around technology and entrepreneurship and all of that which we’re very interested in tracking. That’ll be a conversation we can have down the road. [laughs]