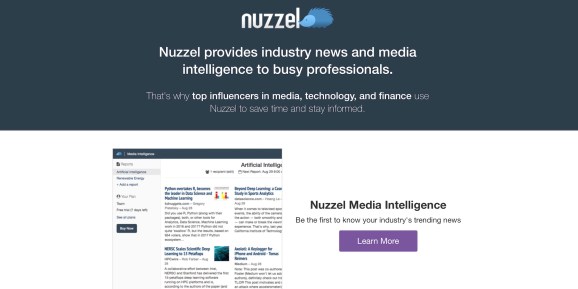 News aggregator Nuzzel has found a new home and leadership and is undergoing some product changes. The six-year-old startup announced today that it has been acquired by Scroll, a company that is working with a number of prominent publishers to build a news subscription service.

Haile will oversee Nuzzel’s operations going forward, and he intends to keep the service independent. “Our first priority is not to screw that up,” he told VentureBeat. “If you like the email digest, you’ll still get the email digest. If you love the app, it will still give you the best discovery experience around.”

But the product is undergoing some changes. First up, newsletters on Nuzzel platform would no longer have ads. “Scroll is not in the ad business so it would be weird for us to include ads in Nuzzel,” Haile said.

Nuzzel’s Media Intelligence, a year-old subscription service that offers personalized insights to professionals, is being spun off. “It’s a great product but doesn’t make a ton of sense to have this business be part of Scroll. It’s going to be taken over by the engineers who built it and are keen to grow that business. We’ll work with them to minimize any disruption during this spin-out,” Haile said.

An unspecified number of Nuzzel engineers would work as contractors for Scroll for the “foreseeable future,” Haile said. That is, the engineers who are left with Nuzzel anyway. Several employees, including lead engineers Ross MacKinnon and Jose Montes de Oca, left the company recently, VentureBeat has learned.

Some Scroll engineers will help the Nuzzel team. And they have a number of things to take care of. The Nuzzel team is in the process of migrating their infrastructure over to managed services at AWS with the goal of improved long-term stability.

Which brings us to why Scroll is buying Nuzzel. Scroll, as you may know, is a coalition of publishers and platforms. It is backed by Axel Springer, News Corp, and the New York Times — three of the world’s biggest publishers — and led by former executives of Chartbeat, Spotify, and Foursquare. The platform counts MSNBC, BuzzFeed, Vox Media, The Atlantic, Slate, Fusion Media Group, and USA Today among its media partners.

“Scroll works automatically if you’re in mobile apps like Twitter, Reddit, LinkedIn or Facebook or just reading in Chrome on your laptop. It seamlessly syncs content across your devices and is format-agnostic,” according to the company. Scroll says more than 60 publishers have been internally testing the subscription service and have determined that “it is possible and profitable to give consumers control over the experience they want.”

The company plans to offer readers access to articles from partner outlets for a monthly fee of $5, 70 percent of which will go to publishers. As of today, Scroll has not launched its service to the public. “Nuzzel is one of the best algorithmic curators out there, and we want to see what we can learn from having that in-house about how best to find a pathway for these kind of discovery activities to be sustainable and solely user-focused. It may not lead to any great breakthroughs, but it’s important to try,” Haile told VentureBeat.

Scroll should release its consumer offering soon. Apple is reportedly planning Apple News Magazine, which would supposedly offer access to a range of news from paywalled outlets and will be offered through a bundled plan.

As for Abrams and Lindstrom? The two have a history together, which goes way back before Nuzzel days. Abrams founded social network Friendster and Lindstrom served as its CFO and CEO during different stages at the company. Abrams told VentureBeat in a separate conversation that they are working together on something new. What that is, he promised to share later.