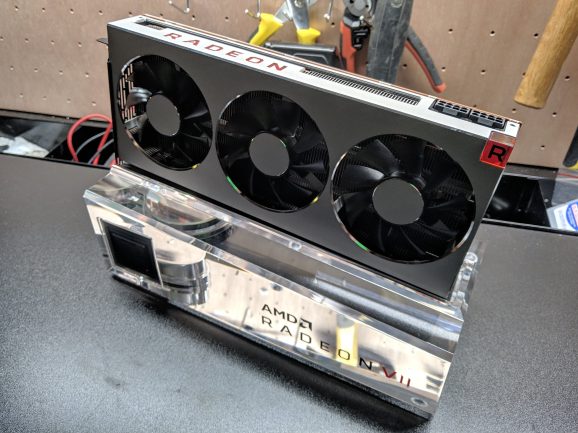 The stand does not come with the Radeon VII.

The very high end of the video card market has had no real competition for Nvidia in years. AMD has put its efforts instead into beefing up its CPUs and providing some of the best mainstream graphics cards. This has enabled Nvidia to raise prices and focus on features like ray tracing that go beyond the standard framerate horsepower race.

But now AMD is ready to jump back into the fight with the Radeon VII. This card is available for $700, and it squares off nicely against Nvidia’s $700 GeForce RTX 2080. What the Radeon VII doesn’t do is undercut Nvidia either in terms of price or performance. Instead, the Radeon VII is a lot like an RTX 2080 — only AMD is making different promises for the future.

The Radeon VII gets its name because it’s the second-generation Vega card (Radeon Vega 2), and it features the new 7nm process (Radeon 7). That new smaller process means that AMD’s chip design produces less heat and can safely draw more power. It’s enabling AMD to compete with Nvidia right now. But when it comes to competing in the future, the Radeon VII’s marquee feature is its 16GB of second-gen high-bandwidth memory (HBM2).

So is the Radeon VII worth it? Is it better than the RTX 2080? And do you need more video RAM or RTX features like ray tracing and DLSS? Let’s find out.

The Radeon VII and RTX 2080 are roughly equivalent in terms of traditional performance.  And by roughly I mean that the 2080 is significantly faster in some games and the Radeon VII is faster in others. I’ll include some benchmark charts below, but you can expect both cards to do fine with games on ultra settings at a 4K resolution.

I tested them both with the following hardware:

Here is the average framerate for seven different games running at 4K on their highest setting except for any vendor-specific features (like Nvidia Hairworks or HBAO+): 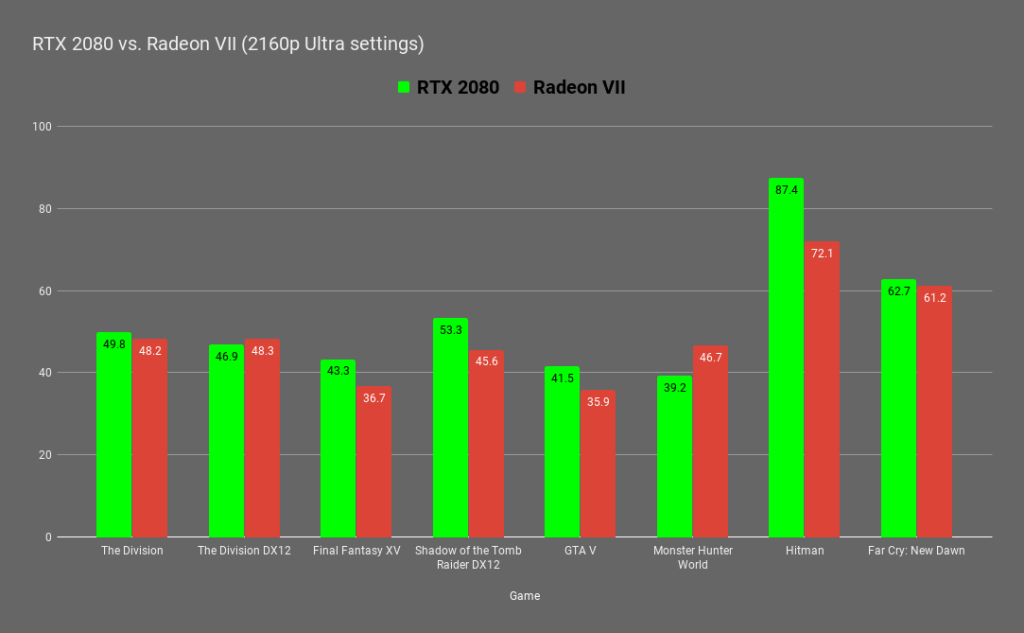 And here is the seven-game average: 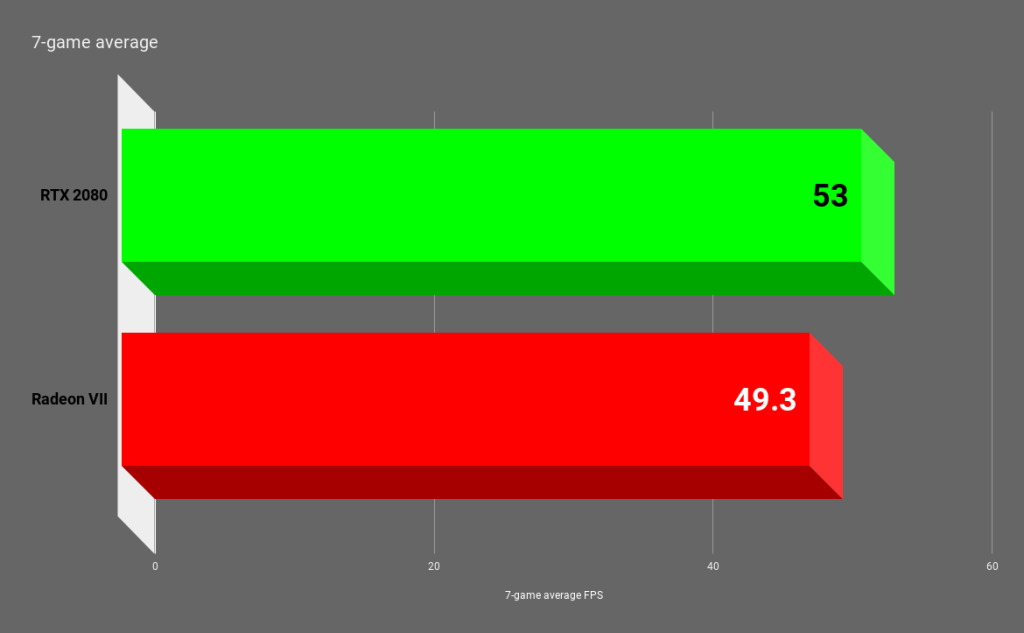 It’s tough to pick a better card based on traditional performance. But the good news is that AMD and Nvidia are both looking beyond the traditional.

While Nvidia has tried to sell its latest cards on the potential of technologies like real-time ray tracing and deep-learning super-sampling, AMD is focusing on super-fast memory and production work. But does any of this matter? Yes — but some of it will matter more depending on what you use the cards for.

The problem with RTX is that very few games support its technologies. Battlefield V, Metro Exodus, and Final Fantasy XV all feature either ray tracing or DLSS. That’s it.

The good news for Nvidia is that ray tracing looks impressive even if it hurts performance. And DLSS does increase performance while maintaining a sharp image in Final Fantasy XV. 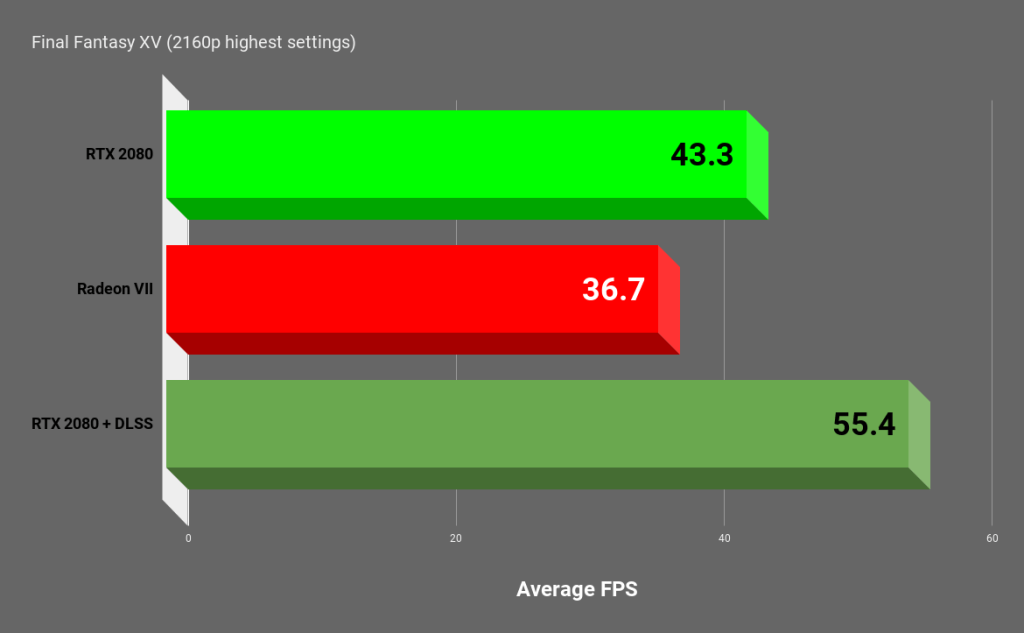 But until developers start putting RTX into more games, it’s impossible to say whether this tech will matter in the future.

For its part, AMD is expecting memory to play a more vital role in future games. And it included a lot of extra-speedy video RAM in the Radeon VII. The 16GB of memory is capable of through-putting more than 1TB of data per second. What is that good for? Well, it should enable developers to push through an astounding amount of 4K or even 8K textures.

But almost no game is going to stress memory to the point that 16GB is necessary. At least not yet. That said, developers may begin to create games that approaches the limit now that a card can support it. Ubisoft open-world games certainly seem like prime candidates, and AMD claims that a certain scene in Far Cry 5 already does benefit from HBM2.

Even if some games do take advantage of full potential of the Radeon VII, most games will try to stay within a much more modest video-RAM budget. So like RTX, we have to wait and see if this makes a difference in the real world.

But the one area that isn’t in question is productivity. Both cards have great features that make them ideal for certain kinds of creative work.

The Radeon VII is outstanding in OpenCL tasks like Blender — at least when I could get Blender working. The early drivers I have are buggy, and a lot of the tests I was planning to do broke. I’ve done enough to see that when AMD’s driver team catches up with this hardware, the Radeon VII should serve as an excellent option for people in the prosumer space looking to work with OpenCL tools.

Neither card has a substantial edge in video production — especially in something like Adobe Premiere. But the RTX 2080 has an updated video encoder that makes it great for recording gameplay or livestreaming. The latest version of NVENC (Nvidia encoder) is only available in RTX cards at the moment, and it potentially eliminates the need for a two-PC setup for livestreamers.

With NVENC, you can play a game and then encode it on the GPU without hitting game performance or touching the CPU. But in the past, NVENC has looked noisy and compressed compared to a CPU-powered x264 encoding at the same bitrate. This new NVENC, however, matches x264 quality at lower bitrates, and it makes the RTX cards ideal for anyone who does a lot of streaming.

As with gaming performance, the RTX 2080 and Radeon VII are pretty similar when it comes to how hot and loud they are. Neither card gets much above 80c under the heaviest load.

But in noise, the RTX 2080 is definitely quieter more of the time. When both devices are running with fans at top speed, they sound the same. But the Radeon VII ramps up to higher fan speeds faster and more often, so in real-world use it is generally louder more often than Nvidia’s card.

At the same time, the Radeon VII’s three fans don’t make any high-pitched whirring noises, so while the GPU is on the louder side, it isn’t exactly annoying.

So which one should you get?

So should you go with team red or team green? And the answer to that is going to depend on a few things.

Finally, you need to choose who to believe about the future. Do you think ray tracing and DLSS will matter before extremely fast high-capacity memory? Then you should get the RTX 2080. If you believe the opposite, then plunk down $700 for the Radeon VII.

I think all of these things will matter eventually, but I would put my money on DLSS mattering the most to me over the next couple of years.

Developers are going to salivate over more video memory, but they’re going to have to keep making games that also work with consoles and RTX 2060s that only have 6GB of video RAM. That’s going to limit how a game can take advantage of the Radeon VII.

But DLSS is showing up in games now, and it is making a huge performance impact. It is such a drastic improvement that it could potentially even make ray tracing viable on the lower end RTX cards. And in four or five years, when the RTX 2080 is starting to feel slow, I expect DLSS to make the RTX 2080 feel significantly faster than the Radeon VII.