Shawn Layden led off this week’s DICE Summit with an inspirational speech about the need to focus on quality games, the rise of accessibility for all players, and a celebration of the diverse teams making video games.

Layden is in charge of 13 studios that Sony owns, and he has to greenlight games that are very risky but potentially deliver huge rewards, like Sony’s stand-out hits of 2018, God of War and Marvel’s Spider-Man. Sony’s studios lead the way at what Layden referred to as the industry’s inflection point, where games are “shedding their youth” and becoming a cultural lodestone.

With great power to move billions of people comes great responsibility, Layden said. Above all, he said, quality matters.

“Our fans trust us to make amazing game experiences for them,” he said. “If this takes more time, we have to give it more time.”

And he said, “New [intellectual property] isn’t always easy, but it’s always necessary. We can’t predict how people will play, but play they will.”

The industry needs to strike a balance between fostering creativity and monetization — and eventually shipping its masterpieces to consumers. 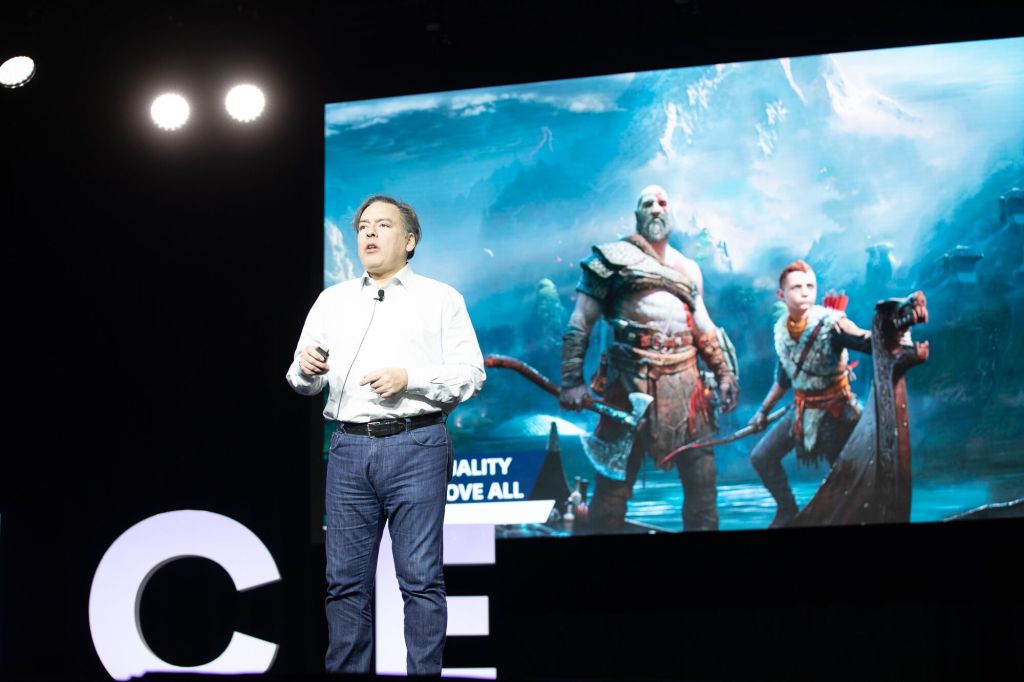 That was nice for Layden to say. But then he truly became inspiring as he credited Microsoft for its expansion of the Minecraft franchise and Nintendo for selling so many Switch hybrid consoles. He said one should never underestimate Nintendo. Layden pointed to Sony’s own fumbles with the PlayStation 3, which he described as “a stark moment of hubris, our Icarus moment.” That turned to a time of inspiration and listening to game developers like Mark Cerny, who went on to help design the PlayStation 4, which has sold 91 million consoles and put Sony back in a leadership position in the industry.

He also praised Microsoft for its Xbox Adaptive Controller, which is designed for people with limited mobility and was featured in an inspiring Super Bowl commercial with the message, “When everyone can play, we all win.” He also talked about how Sony invited Nintendo and Microsoft representatives to come to Sony’s campus in San Mateo, California, where the company celebrated young game developers who were being trained by the nonprofit Girls Make Games.

He closed by saying, “We don’t compete against one another. We craft art, and art is founded on the creative, not the competitive.”

It was a wonderful way to start a few days of inspiration in Las Vegas, where 700 of the world’s elite video game creators come to celebrate their craft. I came upon Phil Spencer, head of Xbox at Microsoft, who spoke similarly last year and appreciated the praise from Sony. He, too, wanted to see where this era of mutual praise and cooperation could go. 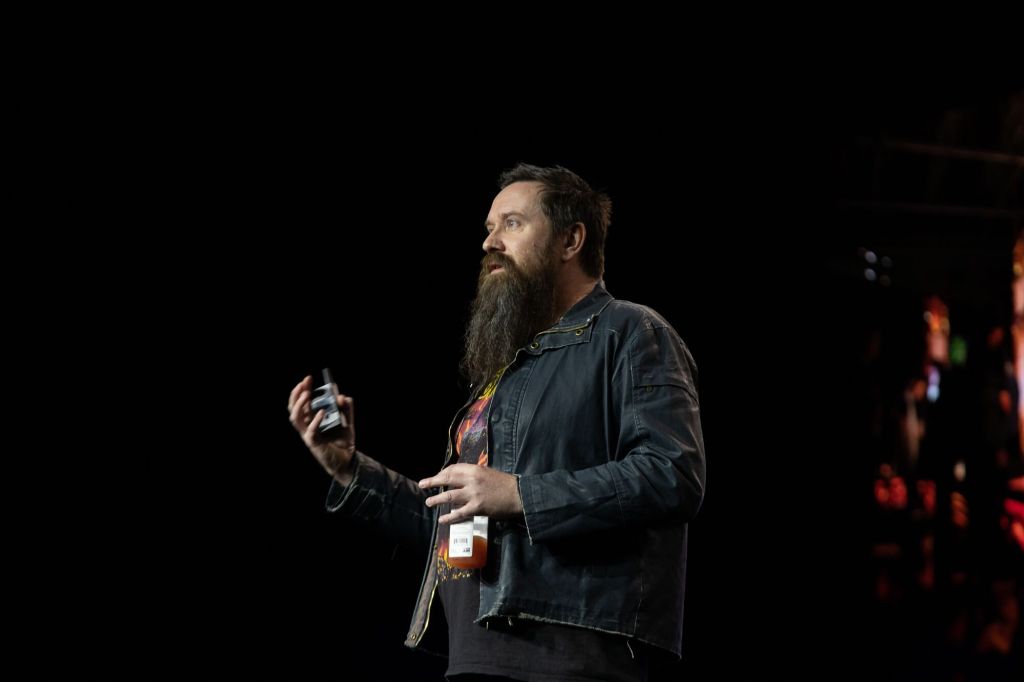 Greg Broadmore, creative director of Weta Workshop, also talked onstage about how he worked with Magic Leap’s Rony Abovitz and his team to build a game that took advantage of augmented reality. The result, after seven years of iteration and two solid years of development with a team of 50 people, was Dr. Grordbort’s Invaders, which was one of my favorite 10 games of 2018. When he started, he didn’t know how to make a game and he didn’t know what kind of platform Magic Leap was going to make. But he said, “F*** it,” and just did it. 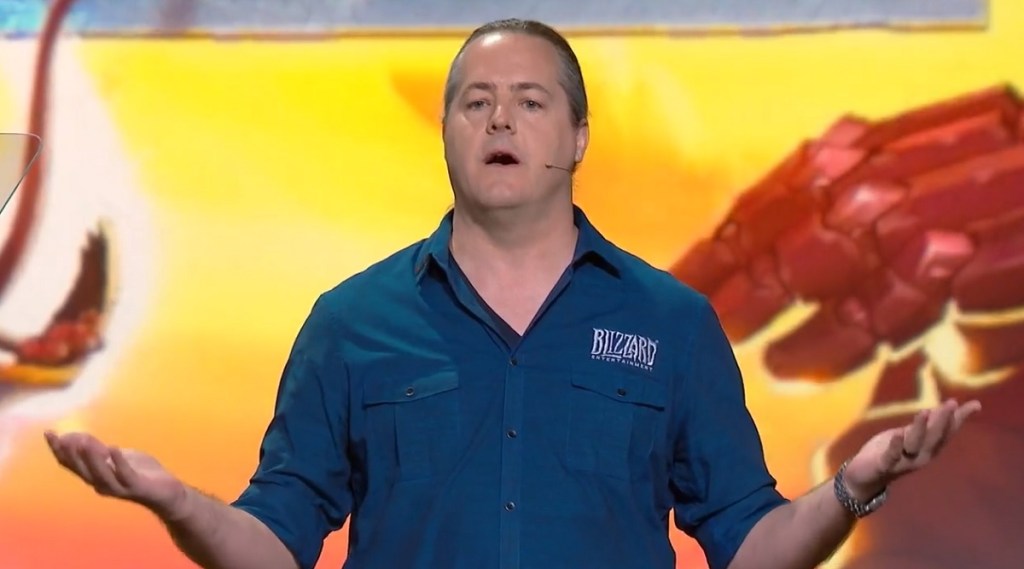 But it’s so easy to crush inspiration. Through no fault of its own, though, this year’s summit was the place where people heard about the layoffs at Activision Blizzard. During a funny session between Double Fine CEO Tim Schafer and Uncharted co-creator Amy Hennig, Activision Blizzard held its earnings call. Only about half way through the call did the company tell the world that it was laying off 8 percent of its 9,600 employees. That amounted to more than 800 jobs.

Coddy Johnson, president and chief operating officer, read the announcement without emotion, “Our restructuring plan sheds investment and less productive non-strategic areas of our business and will result in a net headcount reduction of approximately 8 percent while also driving a significant increase in investment, focus and capabilities around our biggest franchises.”

Later on in the call, after Bobby Kotick had celebrated the “record performance in 2018,” J. Allen Brack, the new president of Blizzard Entertainment, expressed some humanity and emotion about the layoffs.

“This was a very, very difficult decision. I’d say it’s a top five career difficult moment for me personally, but we’re committed to doing everything that we can to help get us into a good position going forward,” Brack said. “We really want to serve our players and we want to serve our communities in the best possible way and be a great creative organization. As difficult as kind of all this is, I think we’re happy about the things that we’re working on. We’re working very hard to live up to our mission and we really look forward to the community and you all seeing the results of this increased development work over time.”

It was among the lowest of the low points for the game industry in the U.S., and the layoffs dominated the conversations in the hallways of Aria, the hotel where the DICE Summit took place.

It is a reminder that video games are business, with winners and losers. And you’ll have to face the consequences if someone else figures out how to deliver a quality game to the masses that is better than yours. Call of Duty: Black Ops 4 held its own, but titles like Destiny, Overwatch, and Hearthstone slipped as fans shifted toward games like Fortnite.

Paying your dues and your taxes

By way of digression, it was interesting to hear (via lawmaker Alexandria Ocasion-Cortez) that Amazon made a profit of $11 billion and paid no taxes in 2018, and it was preparing to build (and then canceled) a headquarters in New York with $3 billion in tax subsidies.

During the week, Supercell reported that it made $635 million on $1.6 billion in revenue — making it one of the best-performing companies in gaming even in an off-year.

And it proudly paid Finland $122 million in taxes.

The CEO, Ilkka Paananen, wrote an extraordinary letter for someone who was a superb capitalist. He said, “Well, sure, of course, it would be great if the numbers always grew from the previous year. But, focusing on short-term financial metrics has never been the most important thing for me or for us as a company. Our concern is that if you start to be driven by short-term financials, you may be tempted to release average quality games too early or be overly focused on monetization.”

Paananen said the company does not try to “optimize” its taxes. Speaking of Supercell’s newest game, he said, “Given such a long gap, everyone was very eager to get Brawl out. I guess there was even some self-imposed pressure within Supercell to do so. This is precisely why I am so proud that the Brawl Stars team took all the time they needed to get the game to where they wanted it to be quality-wise. This is how we all want Supercell to operate: we should only release games that are the best possible experiences for our players; games that we ourselves are proud of. If this takes time, then so be it.”

It seemed like such a different way of looking at games than the corporate view of Activision Blizzard.

Overcoming hatred and finding the road to greatness 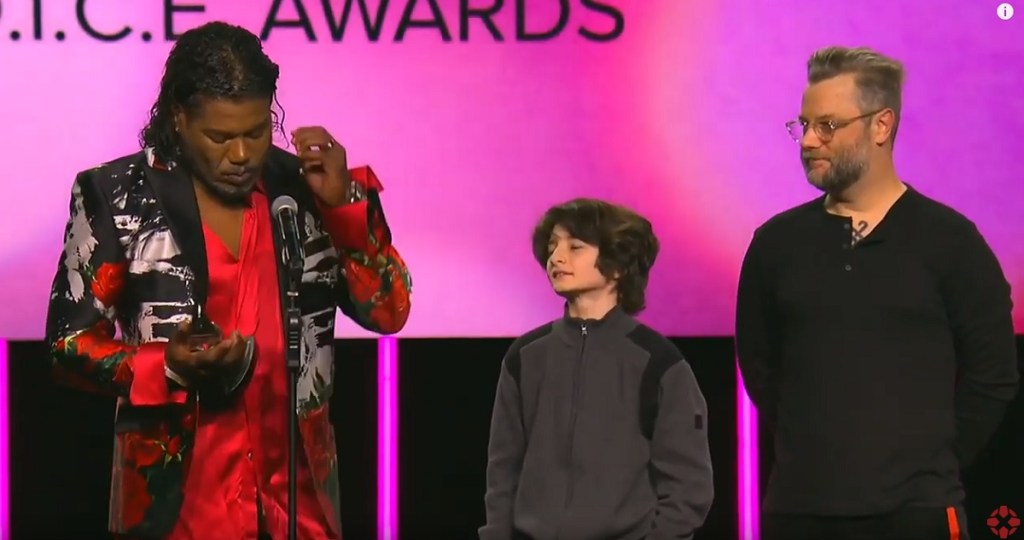 Above: Christopher Judge (left), Sunny Suljic, and Cory Barlog at the DICE Awards.

Onstage, during the DICE Awards on Wednesday night, one of the award winners referenced the “hard day” that the industry had the day before. But early on, we were transported beyond all that with an acceptance speech by Christopher Judge, the actor who played the voice of Kratos, the hero of Sony’s God of War.

From the voice of Kratos came such gentle words.

“It was such a treat to play this character,” he said. “I told my boss Shannon — I’m so proud that a woman is the head of our studio — that playing this character changed me. I was very much a child of the 60s and 70s. It gave me a skewed perception of what determined your worth as a man. And none of it was predicated on being open, honest, being loving. I would like to think I was on my way there. But with this, I kind of got on the Love Express….Not many of you were privy to the intense pressure Cory was under. He never brought it to set. He showed an old man, what being a man is. You listen to people. And you hear them. You listen to people’s suggestions. He taught me more about being a man than I had learned in 51 years. I watched how he nurtured. He made everyone feel more powerful than they were. He made you feel you were part of the process. He talked with you. Not at you.  And that is what being a man is. You empower the people around you. You support people around you. You foster a loving environment.” 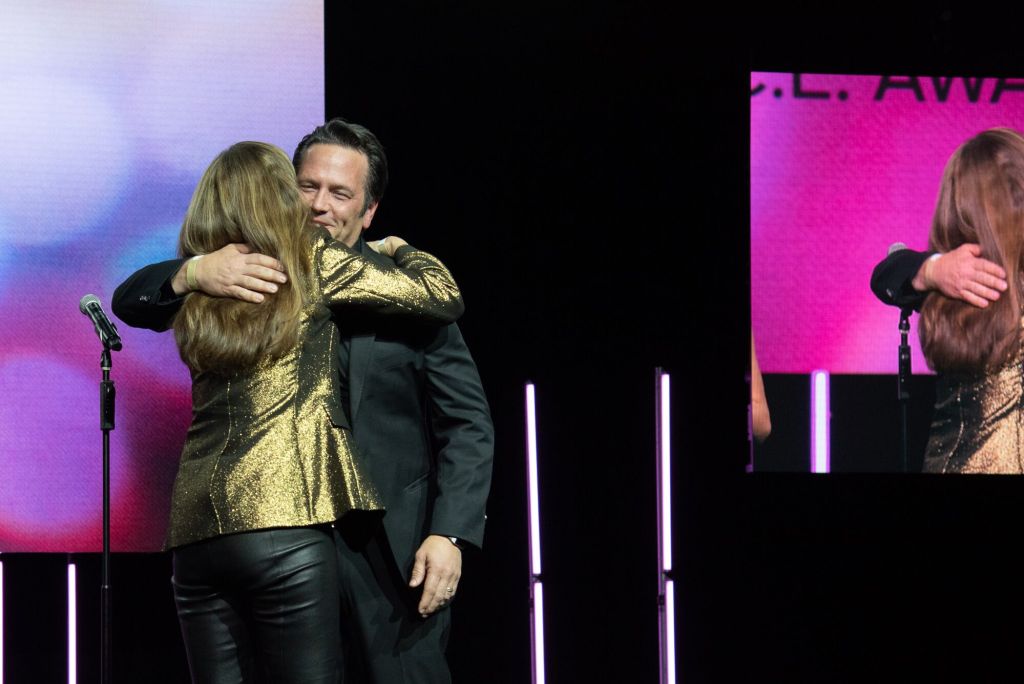 Above: Bonnie Ross and Phil Spencer at the DICE Awards.

At the close of the show, co-host Greg Miller, an influencer at KindaFunny, said, “Remember the people who want to be assholes and dickheads on the internet are a vocal minority. There is an overwhelming silent majority playing through your work, and they love it.”

He drew applause from the developers in the audience, as I suspect all of them have felt the sting of internet haters.

God of War swept nine of 23 awards that night.

Cory Barlog, the creative director of God of War, took the stage one final time to claim the ninth award of the night for his game, which won Game of the Year. He said developers can take two paths: the one of cynicism or the desire to do something great. At Sony’s Santa Monica Studio, he said so many were inspired by their relationships with their own sons in building God of War’s story.

Haters on the internet don’t realize that “every single one of us sets out on the path to make something great,” Barlog said. “Somewhere along the way, the schedule gets shortened and the budget gets cut.”

But he added, “I see so much amazing work, work that inspires me, work that prevents me from doing work because I am playing your work. I want to thank everybody here for all of the work that you do because we are walking down that path of great. We easily sucked in by the path of cynicism, but I absolutely believe from all the work I have seen that we are all inspired to do something more than just things jumping on a screen. It makes me f****** proud of all of you.” 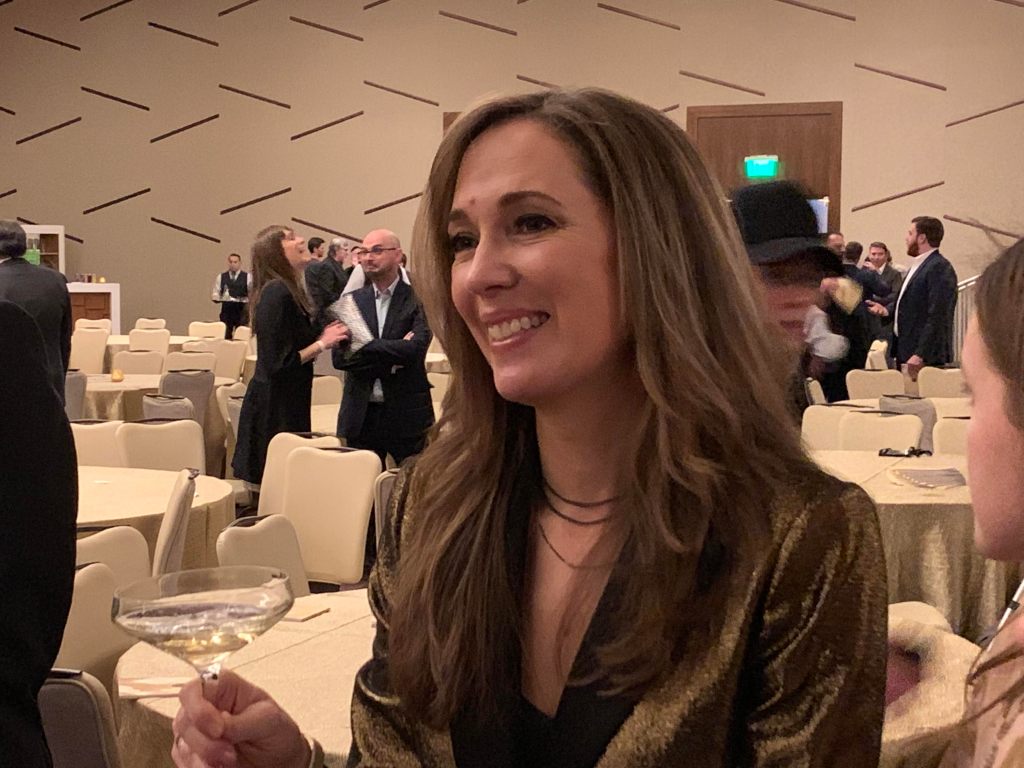 Above: Bonnie Ross, winner of the AIAS Hall of Fame Award for 2019.

Earlier in the evening, Bonnie Ross, a corporate vice president at Microsoft and head of Halo maker 343 Industries, thanked everyone for the Hall of Fame Award and noted that the pillars of the Halo universe are hope, wonder, humanity, and heroism.

Afterward, Spencer gave a toast to Ross, surrounded by her family. It was a heartwarming scene, like bearing witness to the celebration of a full career of greatness. She said Master Chief may have been so beloved because our own world is so desperately in need of heroes of “all shapes, of all sizes, of all abilities, of all colors, and of all genders.”