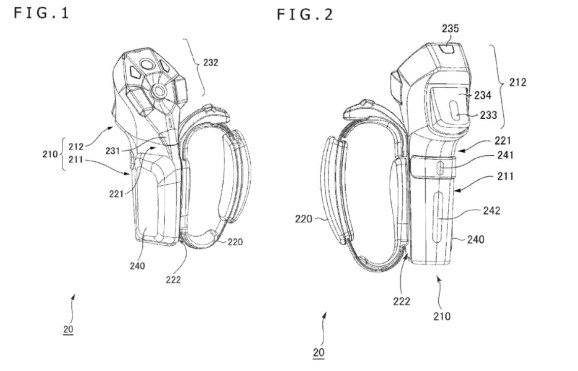 We first spotted these new controllers in a patent published in January 2018. Judging by the documents, they ditch the glowing orb seen on the original PlayStation Move controllers. Perhaps most excitingly, though, they also feature analog sticks. The current Moves don’t have any such sticks, which has made moving around in VR quite tricky for the last three years. But these new patents, filed in 2017 and published last week, point to two other additions.

The first is for what Sony calls a ‘sense-of-force presentation’. To us, it sounds a lot like a basic form of haptic feedback. Basically it would allow the controller to provide some resistance to pressing buttons on the controller, namely the trigger on the back. Doing so could provide more immersive sensations for actions like pulling the trigger on a gun or pressing a button. The controller can even provide different levels of pressure at different points in squeezing.

Next up is a means of detecting whether a controller is being held in the left or right hand. The device uses a sensor to detect the position of the hand and could then remap buttons accordingly. It sounds like a handy little extra; we’re always booting up PSVR games to find out we’re holding controllers the wrong way round.

We also wonder if this feature could be used for some very basic finger tracking as with the Oculus Touch controllers. Basically they know when your thumbs and fingers are grabbing the sticks and triggers and represent your virtual hands accordingly. It’s not the most accurate feature but it’s a nice little touch.

It seems likely that these new PSVR controllers would accompany a new version of Sony’s headset. Rumors about the PS5 have been heating up over the past few months, pointing towards a potential reveal next year. If true, we’re hoping Sony is also preparing a new version of its headset to launch alongside the console. Improved controllers are at the top of our wishlist for such a device.