Tim Schafer is the game industry’s favorite silly man. He hosted the awards ceremonies at the Game Developers Conference (GDC), cracking jokes about Trump and other topics, and they invited him back to do the same this year.

But he’s also a serious game developer as CEO of San Francisco-based Double Fine, and last year, he won the Lifetime Achievement Award for his work at LucasArts and Double Fine, where he created games, such as Full Throttle, Grim Fandango, Psychonauts, Brutal Legend, and Broken Age.

The award came from his peers at the Game Developers Choice Awards at the GDC in 2018. At the time, he joked, “The cash prize for lifetime achievement is sizable.” He suggested people put their money into real estate, rather than putting it into video games like he did.

But thankfully, Schafer has not put himself out to pasture yet. He hosted a fireside chat with Amy Hennig, co-creator of the Uncharted series, at last week’s DICE Summit in Las Vegas. I caught up with him afterward to talk about the game business, crowdfunding, and Double Fine’s upcoming Psychonauts 2. The latter is set to launch on the PC and consoles in 2019.

Here’s an edited transcript of our interview with Schafer, who brought up my performance in Cuphead. I will forgive him for that. But if his next game is a dud, I will track him down and … just kidding. 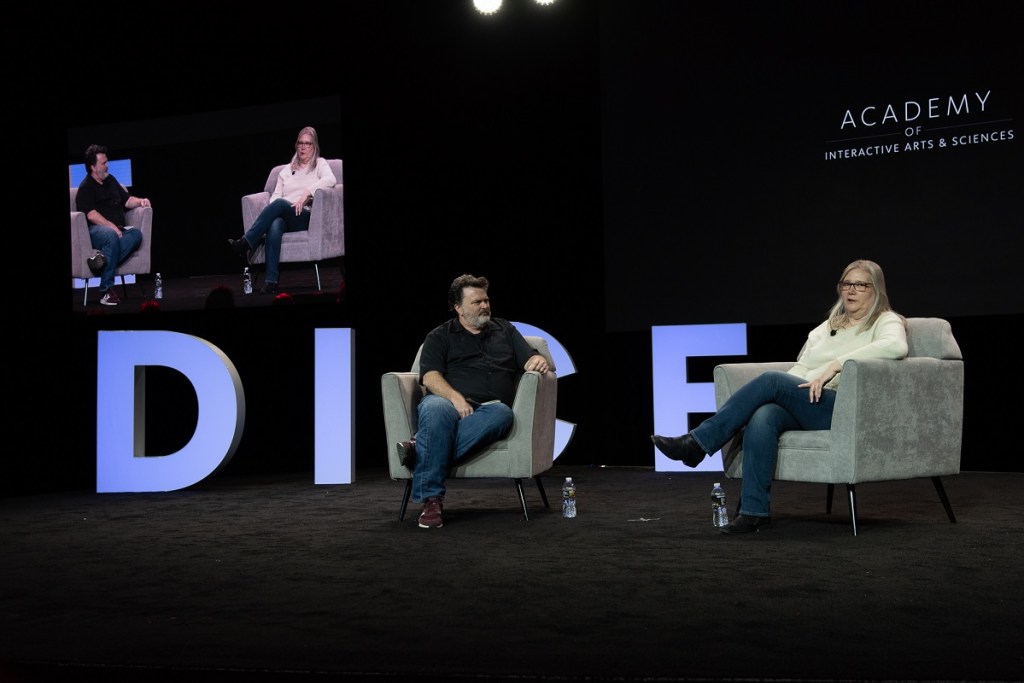 GamesBeat: What do you think about the industry right now?

Tim Schafer: Well, that’s bad news today [laughs]. We’ve been through a lot. Double Fine’s been around 18 years. Amy was mentioning making games for 30 years. We’ve definitely seen shenanigans, industry shenanigans. She said, “It’s a crazy time in the industry right now,” and I thought, when has it ever not been a crazy time? It’s never been boring, the same one year after another. We’ve always just handled that by being nimble, being able to change and work with different platforms and different funding models. Big games, small games, we’ve done all that to stay alive financially but also to pursue what we’ve been inspired by.

GamesBeat: What’s taking up most of your attention now?

Schafer: Right now, it’s Psychonauts 2. I’m writing all the dialogue for Psychonauts 2. We’re wrapping up the dialogue for the game and the storytelling parts of it. It’s interesting because it’s been 10 years or so, but the story takes place the next day, the day after Psychonauts. We’re keeping in mind — where did we last leave the fans’ understanding? Where were they expecting to go the next day? Even though it’s been so long, for myself, have things changed? Just trying to mentally come from the same place when I wrote the first one.

Nowadays, it’s different. We do updates, public updates on the game, which we didn’t do on the first one, obviously. We have a documentary crew hanging out in the studio, looking at our history with crowdfunding and wanting to be transparent with the audience. 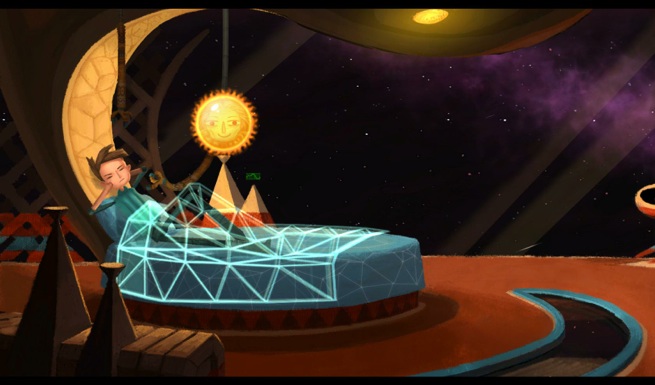 GamesBeat: How much humor would you say is necessary to inject into this one?

Schafer: Psychonauts is an interesting thing. It’s about the human mind, and it goes to some really dark places, yet it’s a comedy. We make a lot of jokes, but we deal with life and death and sadness and all sorts of mental conditions. We bring to life and show people’s inner demons. But I always try to remember it’s a comedy because you can get hung up on resolving plot points and doing that kind of mechanical stuff. You forget that you’re supposed to be making people laugh.

GamesBeat: Do you think of something like Pixar, Inside Out?

Schafer: Inside Out is a very emotional story. When they announced Inside Out — “We’re doing a movie based on the human mind, and then, we’re doing another movie based on the Day of the Dead” — I thought, wait, what’s going on with this company? At first, I was excited by the idea, and then, I was sad that they just weren’t aware of our games [laughs]. But we showed them!

GamesBeat: You seem to have a strong following, people who are interested in the game.

Schafer: Psychonauts has been good. Ever since we got the rights back to it — it made more money in the last five years than it did in the first five. It took a while to find its audience. It’s a very word-of-mouth kind of game. It has a specific type of gamer that likes it, that likes comedy and platforming gameplay. But that’s why we made this game, the barrage of people saying they want to have a sequel. It’s a mandate. It was demanded of us. We had to do it.

GamesBeat: How do you feel about the state of people on the internet demanding things?

Schafer: [Laughs] We went through the whole cycle with our Kickstarter campaign. We went from a honeymoon, where we got all this love and money at the beginning, and then, halfway through, from 2013 and 2014, the most toxic period.

It definitely changed how I saw the public because they’re not just one homogeneous group. You can’t judge them all together, obviously. But even the people who are being the worst, do they even represent real gamers? Or do they represent these organized troll farms? There’s a lot of evidence that there are just these organized troll parades that go out to be negative on purpose. I’m sure you’re familiar with that. You have to separate that from people who are playing your games and have opinions about them, regular people who don’t have some other agenda. We learned to separate that, and we learned who to block. You don’t need to worry about hurting the feelings of a Russian bot.

GamesBeat: The other day, I found one of these Twitter accounts that was apparently created only to insult me. I said Apex Legends was harder than I thought, and they said it wasn’t, and that was the only tweet from that account.

Schafer: It was probably a friend of yours at work [laughs]. But that’s it, exactly. I used to take that stuff more personally and think it was a valid opinion and a valid player. You do have people who play your games and don’t like them, and I can handle that. That’s different from what happens with organized trolling.

I don’t end up blocking people much anymore because I think I’ve built up this firewall between me and them. I think I’ve blocked like 11,000 people or something because I use this autoblocker built to deal with harassment. I still thought Twitter was a useful tool to talk to our community, and I wanted to keep using it, and I didn’t want to have people telling me to kill myself. 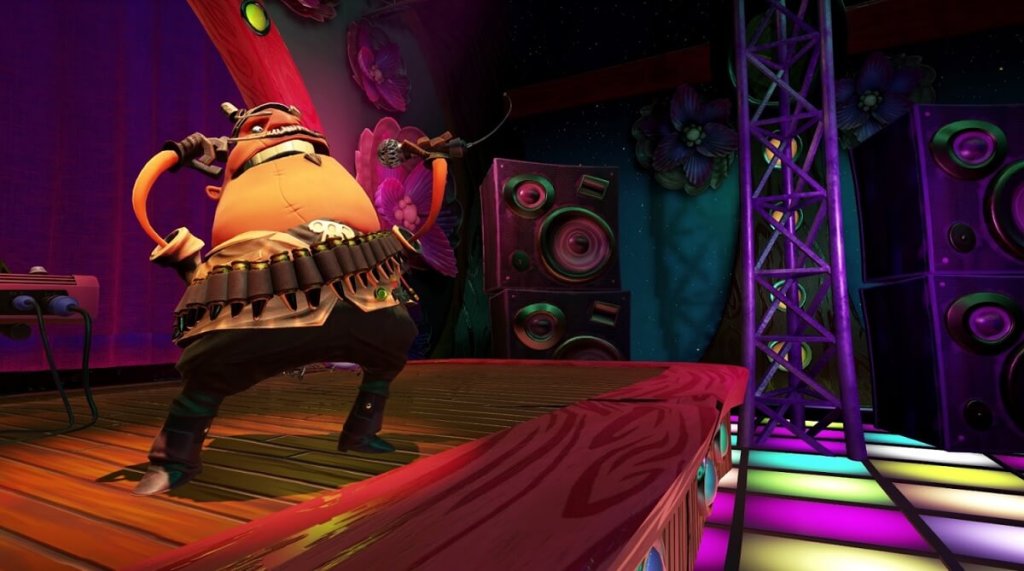 Above: Psychonauts in the Rhombus of Ruin was Double Fine’s move into VR.

GamesBeat: I never blocked anybody. I always thought it was weird to be a journalist, a believer in free speech, and go and shut other people down.

I do it out of principle because — when I was a kid, I would have killed to have access to a game developer. I used to write magazines. “How do you get a job in gaming? How do you make video games?” And, of course, they wouldn’t respond. I never thought I would talk to — I mean, as an adult, I was excited when I got to meet Warren Robinett, who made Adventure. “Oh my God, you made my favorite game!” And nowadays, when you’re playing a game, you can just talk right at the person who made it. That’s not something people should take advantage of. There should be a value to that. If you use that opportunity to be insulting and rude, you should get blocked.

GamesBeat: You should definitely preserve who you are, so those people don’t change you. I’d hope that you feel that way, that you haven’t changed because of all these people.

Schafer: Hmm. Now, I’m a real tough cookie. Hard as nails now. I don’t have feelings anymore. I’m like Deadpool. It’s burned away [laughs]. I think it was hard on the team. You’re really raw when you’re making a game. You’re putting yourself out there. You’re sensitive to feedback in general, which usually comes in the form of reviews. When it’s angry people who are unbound by any sense of common decency saying horrible things about you — I think it took a toll on the team. But I think we’ve moved past it.

GamesBeat: I guess there’s a positive side. People know who you are, and they’re not ignoring you. If they ignored you to a point where everyone forgot about you, that would be even worse.

Schafer: [Laughs] Cuphead was hard, by the way. I couldn’t get very far in that. Tough game.

GamesBeat: I want to check on the percentage of people who did finish it. It was kind of a horrifying figure to find out that 22 percent of players finished Red Dead Redemption 2.

Schafer: That’s a lot of game. Even Greg [Rice of Double Fine] didn’t finish it.

GamesBeat: I think only half of players finished God of War.

Schafer: I’m not surprised by this at all, but I spent the ’90s making adventure games. We always knew that people weren’t finishing these games. “Should we put an ending cutscene in the game? No one’s going to finish this game!” When they couldn’t look up things on the internet…. 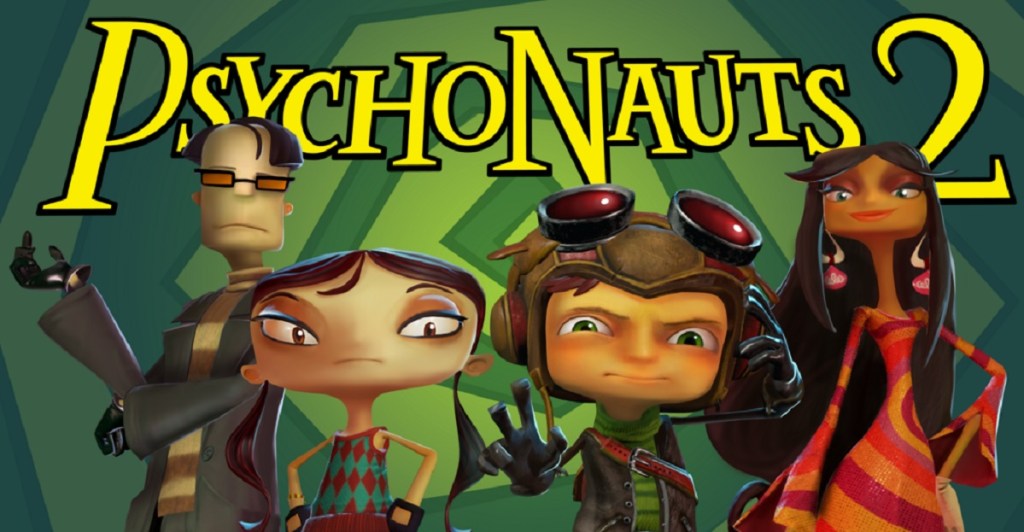 Above: Double Fine raised money via crowdfunding for Psychonauts 2.

GamesBeat: Does it bug you that people aren’t getting to the end of these games?

Schafer: Well, some of them will finish it.

GamesBeat: How is the MC life? Are you enjoying going out and doing speaking and hosting?

Schafer: I’m hosting those awards again. I have to get a speech together. It’s funny. I’ll agree to these things, and then, I’ll get really stressed out and miserable. “Aw, I wish I didn’t have to do this thing on stage!” Then, we do it, and it’s a lovely time, and everyone had a blast. I let Amy do all the talking. That’s the secret.

GamesBeat: After Psychonauts 2, what do you want to do?

Schafer: I have some ideas. We have two teams right now, the big Psychonauts 2 team and a smaller team that’s doing a secret, unannounced thing. That’ll be announced, and that’ll come out. Then, I have a couple of ideas that I’m kicking around. I want to do something new, that’s not a sequel. One of the new IP things I want to do.

Kids is the next thing we’re shipping on Double Fine Presents, from Playables. Have you seen Kids yet? It’s amazing. It’s an iOS and PC game, a kind of interactive narrative short film. They have an animation background. They made a short film from the game that just premiered at the Berlin Film Festival. It’s a really experimental, arty, strange game. And then Knights and Bikes, from Rex Crowle and Moo Yu. Kids doesn’t have a date, but it’s soon. It’s pretty much done.

GamesBeat: For those, would you still go out and crowdfund?