There’s a new leader in town when it comes to the most-seen commercials, as PlayStation has not only been knocked out of the No. 1 spot by King, it actually falls to last place on our ranking of most-seen gaming industry spots. Meanwhile, Square Enix and Xbox are nearly tied in second and third place, respectively.

GamesBeat has partnered with iSpot.tv, the real-time TV ad measurement company with attention and conversion analytics from more than ten million smart TVs, to bring you a monthly report on TV advertising by the gaming industry. These are the ads, and by extension the games, that game makers are putting major muscle behind.

Below are the top five most-seen gaming industry TV advertisers from January 16 through February 15. 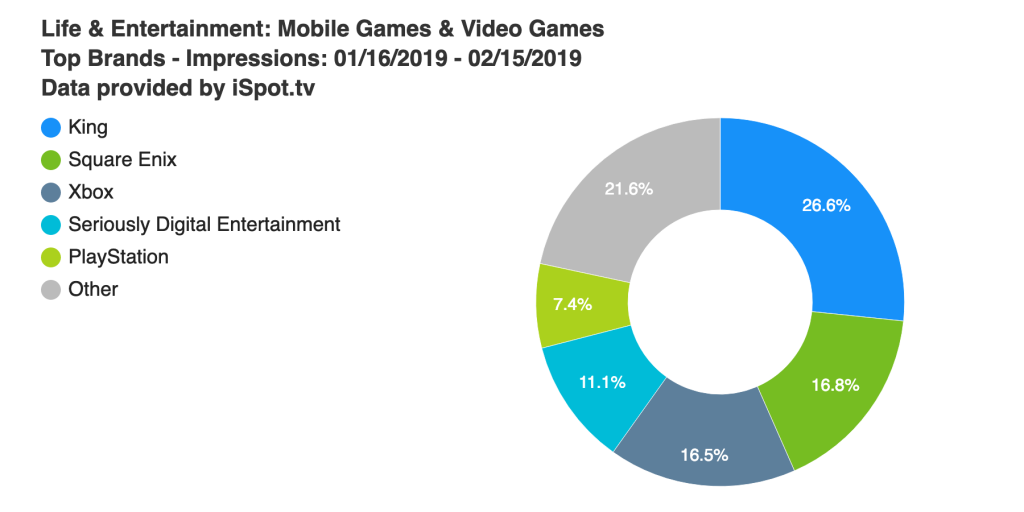 Once again, TV ad impressions declined during the period measured, down to 2.3 billion from last time’s 4.6 billion. In total, 18 brands spent an estimated $34 million on 50 spots that ran over 11,500 times.

King takes first place with over a quarter of all gaming industry impressions. The company ran five commercials over 2,900 times, generating 603.2 million impressions. Its most-seen ad was “Candy Crush Friends Saga: Sweeter Than Ever” with 239.8 million impressions. Three of the top networks when it came to ad impressions were ABC, CBS, and Hallmark, while top programs included The View, The Price Is Right, and General Hospital.

Square Enix racked up 379.5 million impressions from its four spots that aired over 2,000 times. “Together Trailer,” an ad for Kingdom Hearts III, had the most impressions (212.3 million). Disney Channel, Disney XD, and Cartoon Network were three of the networks generating high impressions counts, while Raven’s Home, Bunk’d, and the NBA were some of the top programs.

Xbox took a close second with 372.9 million impressions generated by five commercials that ran over 900 times. Leading the way for the brand with 148.3 million impressions was “Suit Up,” a promotion for game Anthem featuring music by Ozzy Osbourne. Much of Xbox’s audience was for sports-related content, with Super Bowl LIII, the NBA, and college basketball as some of the programs with the most impressions, while top networks included CBS, ESPN, and TNT.

With 167.3 million impressions generated by three ads that aired over 400 times, PlayStation finishes out the ranking. “Bazaar” was the most-seen spot with 156.7 million impressions. As with Xbox, sports-related programs had the highest view counts with the NBA, college basketball, and SportsCenter leading in programs, while TNT, ESPN, and Fox were three of the networks that pulled in big impressions numbers.