HoloLens 2 wasn’t the only product Microsoft announced during its Sunday afternoon press event ahead of Mobile World Congress in Barcelona. Today, it also took the wraps off Azure Kinect Developer Kit, an all-in-one perception system for computer vision and speech solutions that appears to be a more polished version of Project Kinect for Azure, which Microsoft announced last year at its Build 2018 conference.

“Azure Kinect is an intelligent edge device that doesn’t just see and hear but understands the people, the environment, the objects, and their actions,” Microsoft Azure corporate vice president Julia White said onstage. “It only makes sense for us to create a new device when we have unique capabilities or technology to help move the industry forward.”

Azure Kinect combines a 1-megapixel (1024 x 1024 pixel) depth sensor — the same time-of-flight sensor developed for HoloLens 2 — with a 12-megapixel high-depth camera and spatial 7-microphone array, all in a package about 5 inches long and 1.5 inches thick that altogether draws less than 950mw of power. You can toggle the field of view (thanks to a global shutter and automatic pixel gain selection), and it works with a range of compute types that can be used together to provide a “panoramic” understanding of the environment. 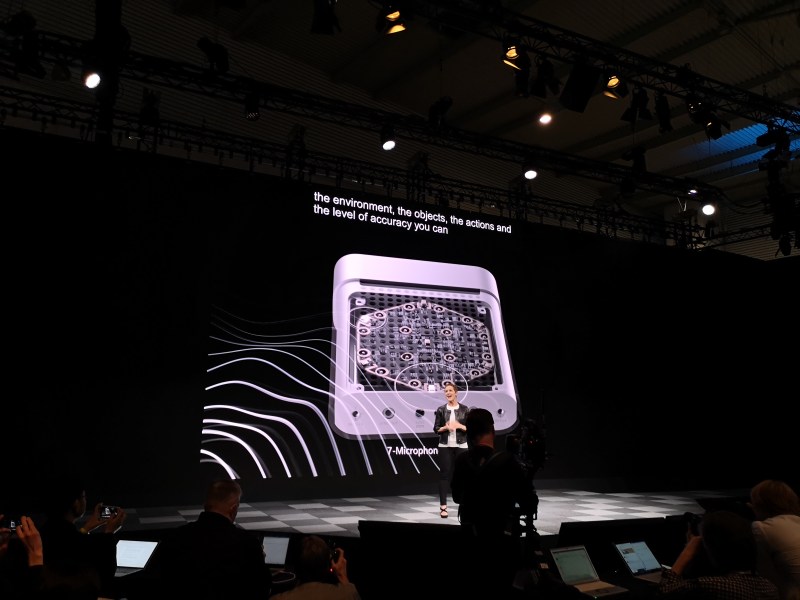 “The level of accuracy you can achieve is unprecedented,” White said.

Through Microsoft’s early adopter program, one customer — Ava Retail — used Azure Kinect and the Azure cloud to develop a self-checkout and grab-and-go shopping platform, while health care systems provider Ocuvera tapped it to detect when patients fall and to proactively alert nurses to likely falls. A third tester — DataMesh — experimented with comparing digital car design models to physical parts on the factory floor.

Azure Kinect — which comes nearly nine years after Microsoft released the first Kinect as a motion-sensing gaming peripheral for its Xbox 360 console — is available in the U.S. and China for preorder, starting today. It costs $399.