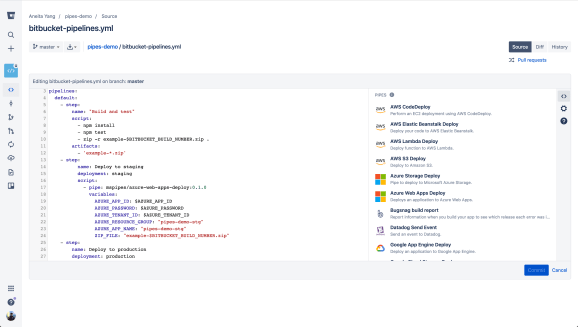 DevOps can be a bear sometimes. A decent portion of the work involves setting up continuous integration and delivery (CI/CD) pipelines, which help automate app building, testing, and deployment — essentially acting as bridges between operations and development teams. That might sound simple enough, but connecting tools and writing integrations for countless services is an error-prone, research-intensive process that involves lots of debugging and maintenance.

The folks at Atlassian’s Bitbucket Cloud today put forth their solution to this problem: Bitbucket Pipes. It’s a cloud-based tool that streamlines the process of automating CI/CD workflows in a “plug-and-play” fashion, and one that integrates with popular environments like Google Cloud, Microsoft, Slack, Amazon Web Services, and more.

Pipes’ launch comes two years after Bitbucket took the wraps off Pipelines, a continuous delivery feature that lets developers build, test, and deploy code without leaving Bitbucket. And it follows the debut of Deployments, a component within Bitbucket that automatically tracks changes, records the date those changes were made, and reveals how far the changes were pushed into a production environment.

“Whether you’re creating a simple deploy pipeline to a hosting service like AWS, utilizing a multi-cloud deployment strategy, or automating a sophisticated pipeline that involves security scanning, monitoring, and artifact management, Bitbucket Pipes makes it easy to build and automate a CI/CD pipeline that meets your exact needs,” said Atlassian head of product Harpreet Singh.

Here’s how it works: After you’ve pulled up a new or existing repository, you’ll see the pipelines view in Bitbucket’s online .yml editor. From that point, adding them to a given codebase is as simple as choosing a pipeline (or pipelines), entering the variables required by the pipelines to run, and copying and pasting the code. Perhaps best of all, there’s no need to update or reconfigure pipelines over time — they’re maintained by the author.

As of 2018, Bitbucket had over 6 million developers and 1 million teams on its platform.