Against all odds, Respawn Entertainment‘s Apex Legends has become one of the most popular games in the world. It had a surprise launch just 25 days ago, but it surpassed 25 million users in its first week. It was late in the crowded first-person shooter battle royale genre, which boasts titles like Fortnite, PlayerUnknown’s Battlegrounds, and Call of Duty: Blacks Ops 4’s Blackout.

Last week, analyst Colin Sebastian of Baird Research noted that Apex Legends had surpassed 100 million hours of streaming on Twitch, beating Fortnite during the same period. Engagement has slipped slightly to No. 2, behind Fortnite, in recent days, according to social analytics firm Spiketrap. But it is still highly successful, and today, Gen.G announced it would even form an esports team for Apex Legends.

People have taken to call the game the “Fortnite killer.” Fortnite itself was dubbed the PUBG killer before that, and PUBG had knocked out H1Z1. Perhaps we are in a cycle, with very little visibility into what comes next in battle royale. I think it was so smart of Epic Games to raise $1.25 billion while Fortnite was on top. Because right now, it looks like Fortnite has some serious competition.

I have been playing a lot of Apex Legends, and I’ll relate my feelings below about why it’s such a great game.

The success of Apex Legends should surprise no one. It comes from the team that made Titanfall and Titanfall 2, and before that Call of Duty: Modern Warfare. Vince Zampella, CEO of Respawn Entertainment, leads the team and he deftly engineered the sale of Respawn to Electronic Arts for $455 million in November 2017. Apex Legends didn’t come from creative copycats. It came from a seasoned team that jumped on the hot trend of 2017: battle royale.

Zampella, who has kindly agreed to speak at our GamesBeat Summit 2019 event on April 23-24 in Los Angeles, told me in an interview that the small team that created Apex Legends was simply told to “chase the fun.” 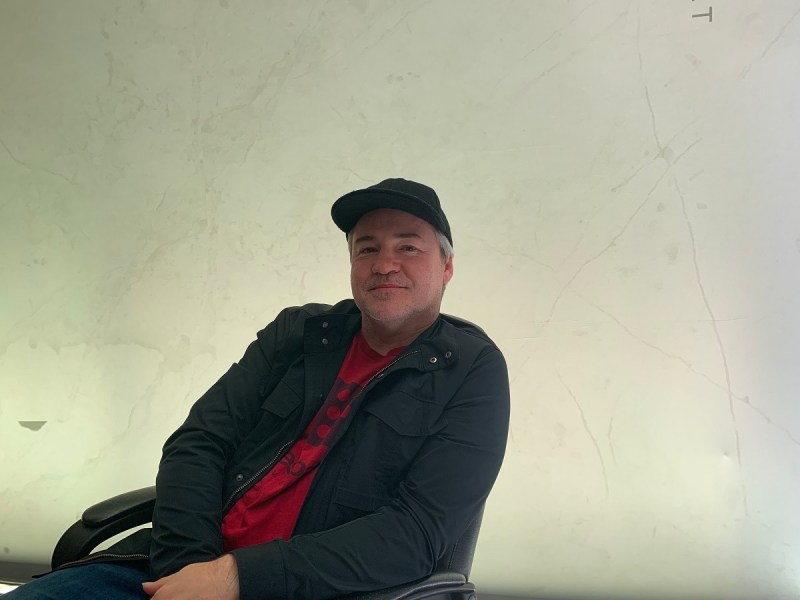 “We kind of set out to find the fun. This is what became the fun and the focus of the team,” Zampella said. “It’s a new, emerging mode. For us, it’s about mixing it up. We try to never do the same thing too many times in a row. This was about, how do we as a team and a company grow? This was something that resonated so well that it had to be the focus of what we do. We needed to get this out.”

Mackey McCandlish, design director, said in an interview the team began before Titanfall 2 shipped in the fall of 2016. They prototyped early games and decided whether they were fun or not. In early 2017, PUBG exploded and Respawn paid attention. It was working on other games at the time — including Star Wars Jedi: Fallen Order, a title that is expected to be launched next month. To the dismay of fans, Respawn even decided to postpone Titanfall 3 in favor of Apex Legends, though Zampella noted that no one should make assumptions about whether Respawn has had to make tough tradeoffs.

As the team kept going, it committed the sacrilege of jettisoning Titans. That was harsh, considering the game takes place in the Titanfall universe. Titans, which are giant mech suits piloted by humans, are beloved by fans of the franchise. The Titans can do enormous damage in the Titanfall games, but the Apex Legends team couldn’t figure out how to make battle royale matches with Titans fair. After all, if one player gets into a Titan in such a match, he or she could lay waste to everyone else.

One by one, the assumptions about how to do a battle royale game were tested. If they were fun, the conventions stayed in the game. If they weren’t, then they got booted. There was, for instance, no point in gathering everyone in a pre-game arena before the match, as they only delayed the launch of a relatively short game. They got rid of the 100-player roster, falling upon 60 as a more manageable yet sizable number. They went with a smaller, more densely packed map. Teams consisted of three players, instead of four.

They also added communications mechanics that allowed players to signal the finding and precise location of cool loot without having to say so using the microphone. You could use the same kind of communication to indicate the location of an enemy you spotted. Players were also encouraged to stick together, revive injured players, and even bring fallen comrades back from the dead.

“It’s a young genre. It has conventions,” McCandlish said. “But since it’s a young genre, you have to look at each convention from first principles and say, ‘Is that just because it happened to be that way? Or is that the best way?'”

Above: Dean Takahashi pumps lead into someone who is already dead, as his partners have enabled him to win an Apex Legends round.

I’ve chased the fun myself, sticking with Apex Legends even as other big titles like EA/BioWare’s Anthem and 4A’s Metro Exodus games came out. All three of the games have small problems with bugs that have been annoying, and I hit a major one that stalled my progress in the PC version of Metro Exodus. So I’ve been playing Apex Legends exclusively, trying to get better at the game. One day, I’ll return to those other games, hopefully.

That’s hard for me, as anyone with knowledge of my game skills can tell you. I play shooters more than any other game genre, but in competitive matches, I always get killed more than I score. But this game is accessible. It rewards you for being persistent and learning how to play any of the eight different characters. I’ve stuck with Lifeline, the medic, and she has served me well.

I am playing it on a Windows PC with an AMD Threadripper processor and an Nvidia GeForce RTX graphics card. It runs smoothly, but the game still crashes now and then. I found that my mouse and keyboard skill had atrophied quite a bit. I would shoot well if I was standing still. Or move well if I wasn’t shooting. But I had trouble doing both, and I was getting eviscerated in gun battles as I moved in predictable ways. I went six days without a kill at the start. But then I switched to a USB-connected Xbox One controller. With the two sticks, I found it was easier to move fluidly and aim at the same time. My kills have now shot up to 35, and I’ve reached level 25.

Once I solved that aiming and moving problem, I worked on other skills like playing with different characters or reviving teammates. Like Call of Duty’s Blackout battle royale mode, the guns feel good in Apex Legends. If you’re standing at the correct range, you can generally hit a target that you’re aiming at. The weapons run out of ammo fast, so you have to hope to get extended clips as you gather loot. My favorite weapon combo is a Spitfire machine gun and a EVA-8 shotgun. 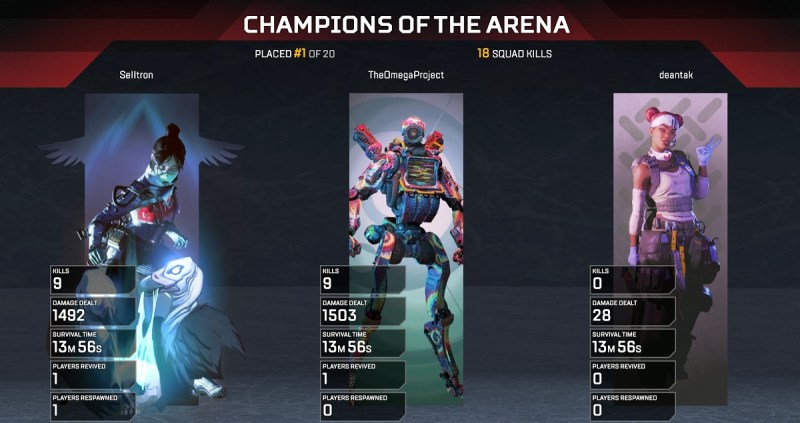 Above: The victors: Dean is the one on the right, with zero kills in the match.

I love the small nuances of Apex Legends. As in any battle royale game, you are vulnerable when reviewing the gear of someone who has been gunned down. While looting, the smart communications system tells you that if you pick up a new gun, it should automatically equip that gun with compatible attachments that you already have.

Half the time, my microphone doesn’t work. I don’t know why, but I’ve always had troubles with it on my Windows machine. I think I’ll have to find friends on Discord and communicate that way instead. But you don’t always need the microphone, as noted earlier. Often, I’ll play with people who have hundreds of kills. But I’ll also play randomly with people who have no kills. I defer to the veterans on where to land, but I notice they are invariably overconfident. They land in the zones where there are lots of enemies, and they wind up getting us all killed quickly. I like to land far away from the crowd, but I have trouble getting us to those locations upon jumping out of the spacecraft.

Sometimes the veterans are harsh, criticizing me for failing to keep up with them or hit my targets. But others offer good advice. I tag along with them and on two occasions, they have carried me to victory. That’s a nice feeling, and it’s not as rare as with other matches. In Blackout, for instance, you have a one in 25 chance of winning. With Apex’s three-player teams and 60-player roster, you have a one in 20 chance of winning. That has happened for me twice now, and you can see one of the matches in the video embedded in this game. Hilariously, at least to me, my comrades both got nine kills each in the match, while I got zero. But hey, at least I didn’t get myself killed in this match. Other times, I get to play the veteran and lead our team so we don’t get shot early or caught outside the shrinking circle.

At some point, I may get tired of the map. But so far, I’m enjoying myself. And I can see the infinite ways that Respawn can iterate and improve the game. They can, for instance, add new maps, new weapons, and new characters. I realize that we’re on the ground floor of what could be a very long game. But Respawn should enjoy it while they can. After all, at this rate, somebody else could come out with a new battle royale game and knock out Apex Legends.

But I have to say. Apex Legends is such a breath of fresh air. It restores my faith that creativity and fun always come out on top. Respawn chased the fun, and it caught it.