GamesBeat has partnered with iSpot.tv, the TV ad measurement and attribution company, to bring you a monthly report on how gaming brands are spending. The results below are for the top five gaming industry brands in February, ranked by estimated national TV ad spend.

After a general lull in January, spending picked up in February with an estimated total of $41.6 million spent on TV commercials by gaming brands. Overall, 19 brands ran 54 spots more than 11,300 times, generating over 2.4 billion TV ad impressions. 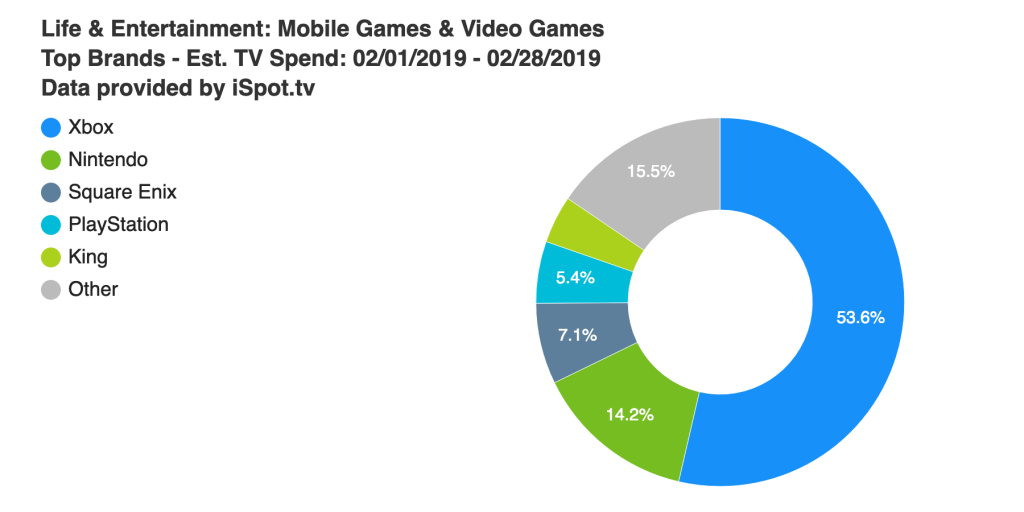 Xbox’s big Super Bowl LIII spot “We All Win,” promoting its adaptive controller, helped propel the brand into first place for industry spend. The brand’s total estimated budget was nearly $22.3 million for eight ads that aired over 2,200 times and racked up 744.6 million impressions. CBS, ESPN, and Adult Swim were three of the networks with the highest spend, while top specific programming included Super Bowl LIII, the NBA, and college basketball.

Nintendo is a distant second place with an estimated spend of $5.9 million for 11 commercials that ran over 1,600 times, creating 346.4 million impressions. “My Way: $35 Nintendo Credit” was the ad with the biggest budget (est. $1.5 million). Networks topping the list for spend included Discovery Channel, Adult Swim, and Comedy Central, while the NBA, South Park, and Ridiculousness were among the programming attracting big budgets.

At No. 3: Square Enix with an estimated budget of nearly $3 million to place five spots that aired over 1,300 times, generating 291.8 million TV ad impressions. Once again, “Together Trailer” had the biggest outlay — an estimated $1.5 million. NBA Basketball, the 2019 NBA All-Star Game, and SpongeBob SquarePants were among the specific programming that accounted for high spend amounts, while top networks included TNT, Nick, and TBS.

After months leading our ranking, PlayStation drops to fourth place. The company spent an estimated $2.3 million on just three ads that ran 81 times, resulting in 79.9 million impressions. The spot with the biggest placement budget (est. $1.6 million) was “The Highest Rated Game,” promoting Red Dead Redemption 2. PlayStation allocated major spend to networks including NBC, AMC, and Fox, and programing such as The Walking Dead, This Is Us, and the 2019 Daytona 500.

King takes fifth place in industry spend with an estimated budget of $1.7 million to place three commercials that aired over 2,100 times and generated 443.1 million TV ad impressions. The Candy Crush commercial “Valentine’s Event: Me, Me, Me…” had the biggest outlay (est. $790,879). Three of the networks with the highest spend were ABC, Univision, and MTV, while top programs included Primer Impacto, The View, and Strahan & Sara.