Zelda II: The Adventure of Link has always been the franchise’s black sheep, red-headed step child, insert cliche here. Look, it’s weird, and I never was able to get into it. But thanks to its release on Nintendo Switch Online‘s selection of digital NES games, I gave Zelda II another chance. And I’m finally digging it.

What makes Zelda II so strange? Even reading that name feels bizarre. There’s no “The Legend of.” It’s just Zelda … II. It’s the only numbered sequel in the entire franchise. Back then, when it was only the second Zelda game ever, it made sense. In 2019, that name is bizarre.

Mechanically, it’s a different experience from its predecessor, a top-down action-adventure game about exploring an overworld and conquering dungeons. Zelda II still has an overworld and dungeons (or palaces, as they’re called here). But this is much more of a role-playing game … a 2D RPG. Walking around the map gives you that familiar top-down view, but when you’re in a field encounter (yes, it has those), palace, or town, you’re looking at the world in only two dimensions. 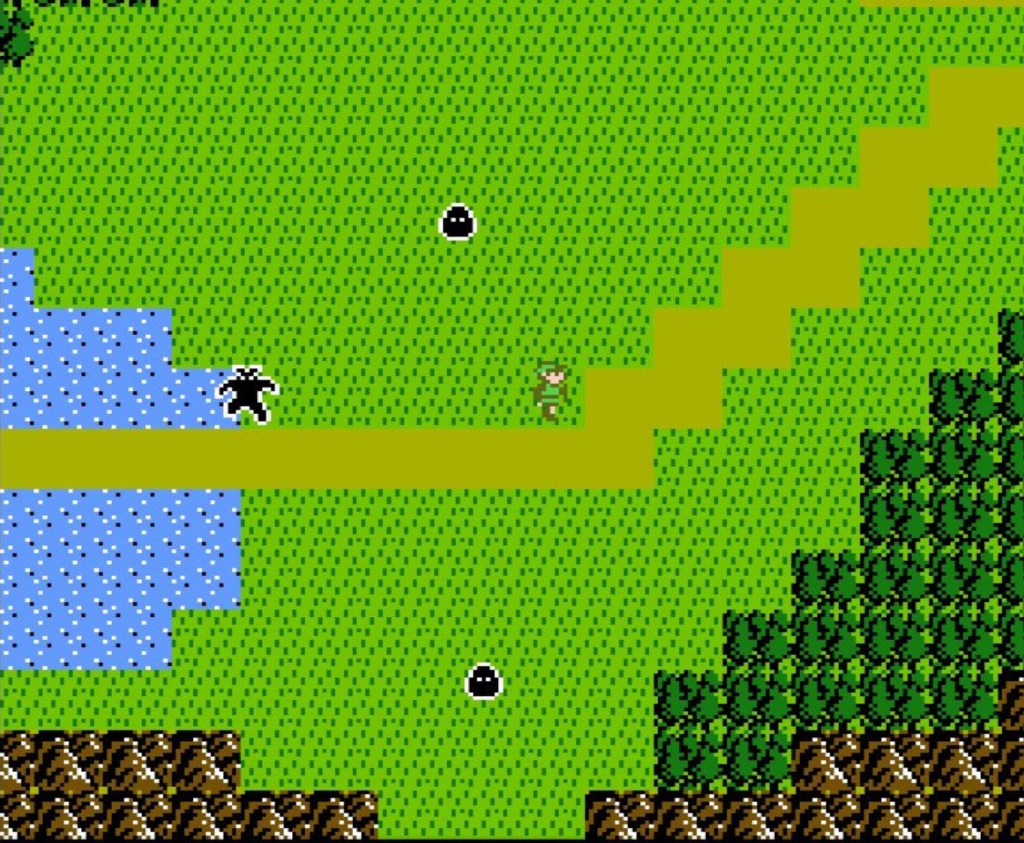 Above: They aren’t technically random encounters, but it can be hard to dodge these guys.

Fights are all about sword-and-shield-play. You can block most attacks with your shield. Your sword is tiny, so being good at Zelda II requires you to think defensively. You need to turn, crouch, and jump in order to block or dodge everything that wants to kill you.

And then there’s the RPG elements. You gain experience points from some enemies or from picking up P Bags (heh). Then you can increase your health, attack power, or magic. Yes, the game has magic! You learn spells that do things like increase your jump height or even turn you into a flying fairy.

Reading that description, nothing about Zelda II sounds bad. So why couldn’t I get into it before? First off, it’s just so different. Every other Zelda game takes most of its inspiration from the original. Zelda 2 is the only 2D-focused game in the series. It’s also difficult. In most Zeldas, you can just run at most enemies and swing your sword like a maniac until they die. Doing that Zelda II will often get you killed. You need to be careful, defending yourself against attacks until you have the right opening to get a sword swing in. 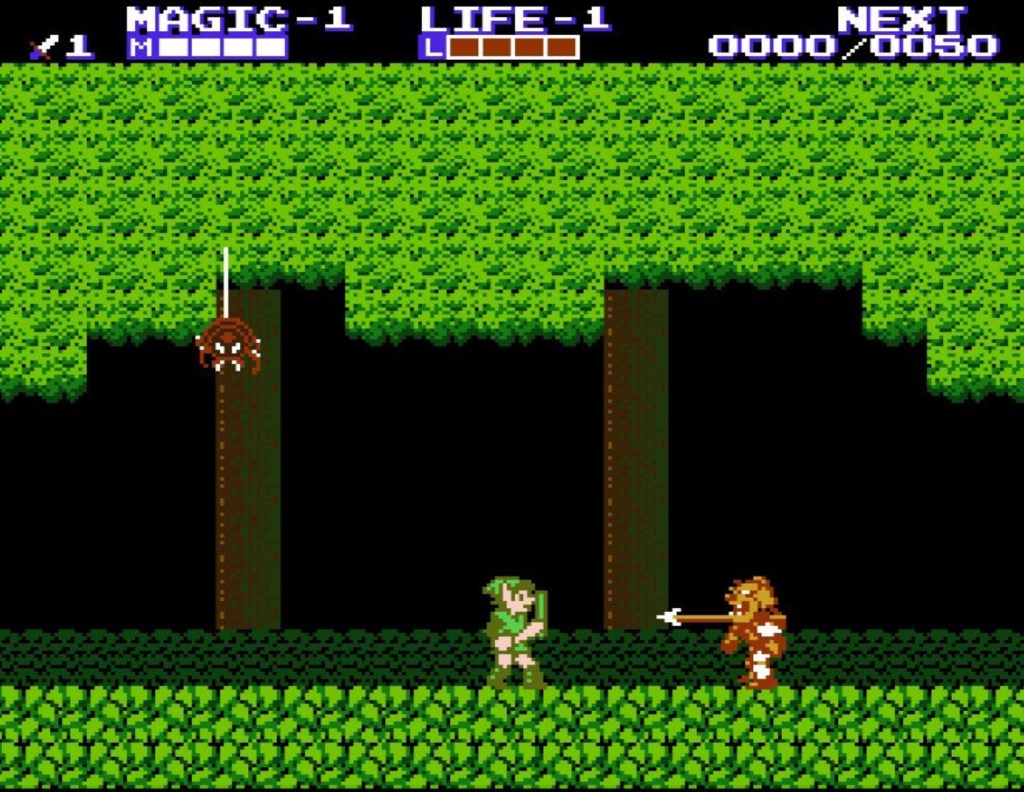 Above: That spear sure is longer than my sword.

But most important, Zelda II is confusing. The world is big and difficult to navigate. It encourages exploration, but I’d always just die, get lost, or become frustrated before I could make much progress.

That’s why this time I’m playing Zelda II with a guide. This may be heresy, but it’s helping me finally enjoy this game.

Zelda II is a lot of fun when you can actually make progress in it. The palaces are interesting to explore once I’m able to find them (something I could never do on my own). And, yes, I have to admit to even using the Switch versions use of quick saves. I’m trying not to abuse the feature. I’m not using them in the middle of a boss fight or anything. But it’s much nicer to get to resume my progress at the start of a palace instead of the literal beginning of the game if I get a game over. 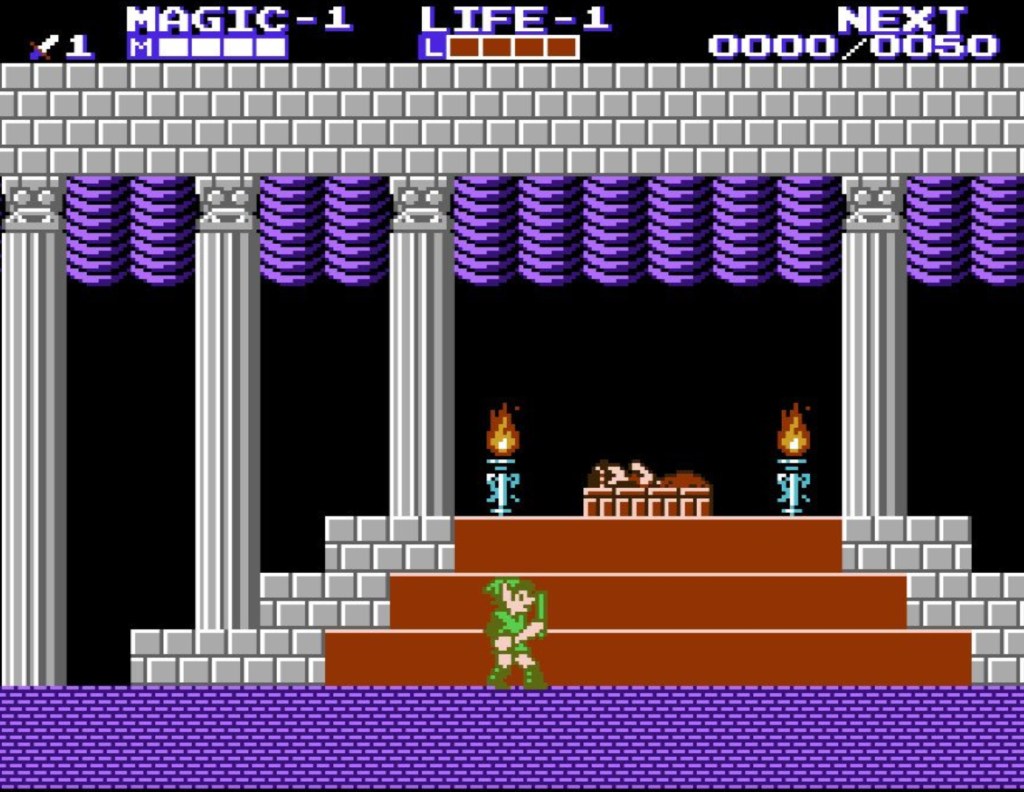 Above: You start back here every time you game over.

Quick saves also help me practice. A lot of the enemies in Zelda II are tough. Quick saving before I fight one, battling a difficult monster, and then loading and doing it over and over again is helping me become much more proficient at Zelda II.

Part of me feels icky for playing Zelda II with a guide and save states. But after years of false starts trying to beat it, I don’t feel too guilty. Besides, I imagine even the kids who managed to beat this game back in 1987 were probably using printed guides from magazines like Nintendo Power to help them out. It’s hard to imagine making much progress without one.

And even if I am cheating a bit, I’m glad that I’ll be able to see all of this game. Zelda II is a creative and daring adventure that still stands out for the risks it takes. It’s the opposite of a conventional sequel, and that alone is a good reason to love it.