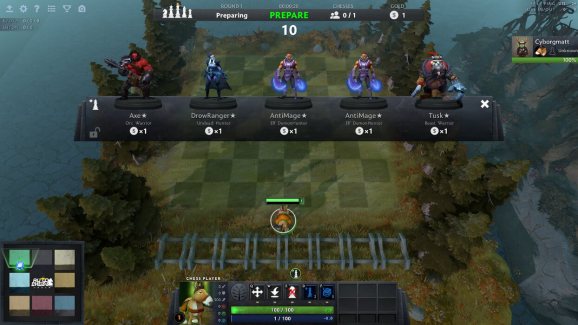 One of the most popular games in the world right now is about to make the leap to mobile. Dota Auto Chess has tens of thousands of players on Steam, but now developer Drodo Studio is prepping to expand it to a new audience.

Dota Auto Chess tasks players with collecting a squad of powerful units and then taking them online to battle on a chess board. It uses the heroes from Dota 2, but many of their abilities are different. The actual game is a 4-on-4 battle with other players, but the action is largely automated based on the makeup of your team.

In the process of adapting Auto Chess for mobile, Drodo is dropping the Dota 2 heroes. Instead, the game is getting an all new lineup so that the studio can fully own its intellectual property.

Auto Chess is available for prereservation on iOS and Android in China right now. Drodo is building it in partnership with developer Dragonest, and that studio is taking signups now. It does not have an official release date.

Drodo isn’t wasting any time capitalizing on its creation. Dota Auto Chess is massively popular, but it’s also a free-to-play mod for Dota 2. So another studio could capture away some of that momentum by releasing a standalone imitation on other platforms.

That has happened before with MOBAs. Dota 2 is the unofficial followup to the Warcraft 3 mod Defense of the Ancients. That is the mod that created the multiplayer online battle arena genre. But Riot Games was able to capitalize on that idea better than others by releasing the standalone League of Legends.

That could happen with Dota Auto Chess, but Drodo could head that off if it can bring its game to mobile sooner rather than later.

In the meantime, you can get Heroes Auto Chess on the Google Play app market for free right now.