Hearthstone kicks off the Year of the Dragon with the Rise of Shadows on April 9. This is the first expansion of this Standard year rotation, and it’s bringing together a bunch of bumbling baddies in what’s a Blizzard Entertainment first — a year-long storyline for Hearthstone, and it’s own take on DC’s Legion of Doom or the Sinister Six of Spider-Man infamy.

Though it’s clear that this gathering — Rafaam, Madame Lazul, Hagatha, Togwaggle, and Dr. Boom — are more like Dastardly and and Muttley and Their Flying Machines than, say, the Fearsome Five that devils DC’s Legion of Superheroes.

Hearthstone is the top dog in the market, which research firm Newzoo estimated would be worth $2 billion by 2020, and it made more on mobile in 2018 than it did in 2017. It’s entering its fifth year. In addition to new set of 135 new cards (Blizzard calls them dastardly, but I’ve played them, and some are downright funny or cute), the Rise of Shadows is bringing in a few tools for Boom and Co. to help pull off their malevolent mayhem … or for you to use to stop them. 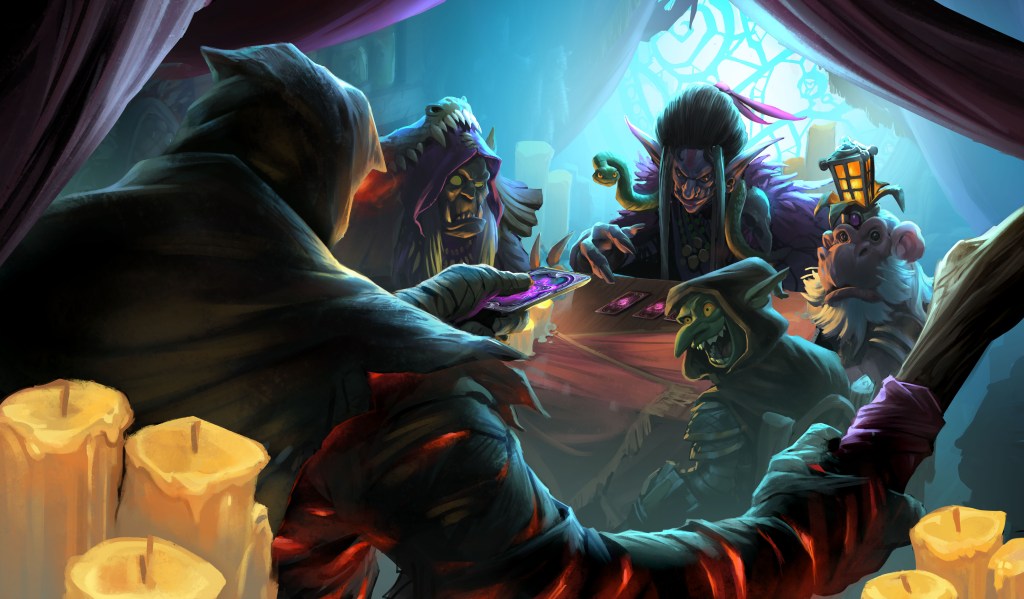 Above: The League of E.V.I.L. sure isn’t the Sinister Six.

Rafaam, Madame Lazul, Hagatha, Togwaggle, and Dr. Boom are the villains for this year’s storyline. Each represents one of Hearthstone’s eight class:

Arch-Villain Rafaam is a Warlock card. A Legendary, Rafaam is a 7/8 minion for 7 mana that replaces your hand and deck with Legendary minions. It’s a callback to The Golden Monkey from League of Explorers.

We also learned about some of the other new cards:

I talked with Hearthstone creative director Ben Thompson about Rise of Shadows, these bumbling baddies, and how long these ideas have been in the cooker. Here’s an edited transcript of part of our interview. The rest will run next month, as it’s under a Blizzard Entertainment news embargo. 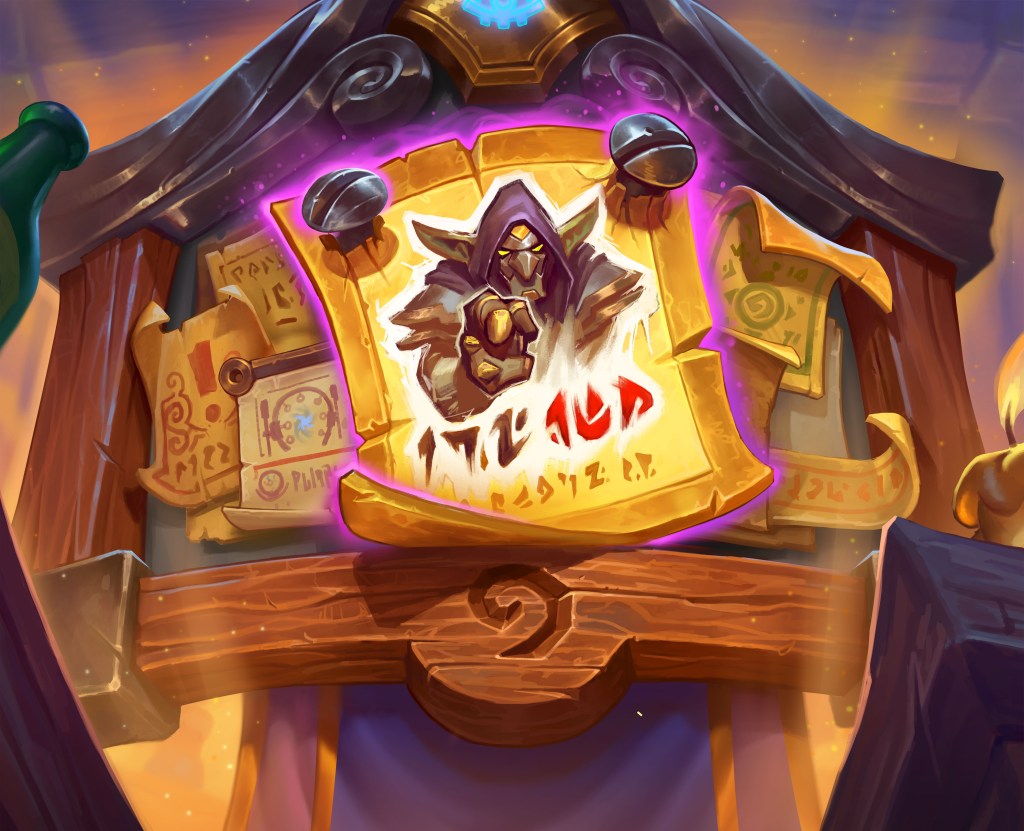 GamesBeat: What does E.V.I.L. in the League of E.V.I.L. stand for? On some of the cards it wasn’t abbreviated, so I didn’t know.

Ben Thompson: Not bring abbreviated, on the cards, purely comes down to space. We want to make sure we get the room to show the name of the villain attached to it. It is E.V.I.L. What does it stand for? Well, I’m sure the rest of the E.V.I.L. League would like to figure it out.

In my own mind, at least, I picture this being the most important thing for four of the five to be figuring out, and Rafaam really wishes they would focus on the task at hand here and get past that, so we can go do more evil things than name ourselves. I also like, a bit, in the back of my head, the fact that it’s League of Explorers and League of E.V.I.L. — LOE. They’re so unimaginative and not super-creative as evil folk go that they couldn’t even find a different acronym. But they’re bound and determined to make their way in the world. For me, I’m curious to see what Reddit comes up with as far as what that could stand for.

GamesBeat: How long have you been working on the Rise of Shadows storyline?

Thompson: This is something that’s been attractive to us, honestly, all the way back to League of Explorers [an adventure that launched in November 2015]. As soon as that came out and we saw the reaction of players to this inherent league of good guys, if you will, making their way in the archaeological side of things and trying to protect all of these magical ancient items — at the time, Jason Chayes and myself and even Eric Dodds [who are no longer on the Hearthstone team] and others started talking about, for every good there’s always a bad, right? What’s the anti-hero group? What is a group of villains like in Hearthstone? We’d never really talked about that before.

As you’ve seen, there’s always a singular when we talk about the villains. There’s just Rafaam or just Dr. Boom. As we asked ourselves that question, time and again, over the intervening years that came after League of Explorers, more and more we realized this cast is really building itself. We started with Rafaam, but immediately after that you have things like Togwaggle showing up, Dr. Boom showing up, and not just once but twice or more.

GamesBeat: Did you get together as a small group, to put them all together, or did one of you just say, let’s do this? And then everyone said, that’s great, let’s do it.

Thompson: There was a small set of us. Peter Whalen, for sure. Myself, for sure. Others who’d been around since League of Explorers. Every time we came up with a new expansion or a new set, we’d look at each other and be like, is it time? Can we do it? No, you know what, you’re right — trolls are really cool. Let’s do Rastakhan’s Rumble instead. How about now? I dunno. Kobolds, there’s a fun narrative there in the idea of dungeon-delving and all this stuff.

It’s one of those that showed up on the whiteboard multiple times before we finally looked at it and said, you know, if we had any guts, we would not just do this, but we would do a whole year of it. We would really dedicate the resources and the time and creativity to doing this right, doing it in a way that we get to make the most out of the fact that there’s not one, not two, but five of these evil villain characters. What’s a plot, or some kind of evil undertaking, that’s worthy of 365 days of storytelling? It happened to line right up with things like wanting to revamp what single-player really is, or this idea of telling the story in a way that heralds or has that record-scratch moment for players, where they realize, OK, this is going to be new and different this year. Something else is going on.