GamesBeat: When you were doing this, the story and the revamp in single-player, did these two things come together nicely, or did you say, wait a second, our best chance to introduce a year-long storyline is to do it when we revamp how we do single-player?

Thompson: The two were goals — they started separately. Certainly it was, I love this cross-year narrative idea, I love the idea of the evil league, this is something I’ve been talking about personally for a long time. And it happened to coincide a lot with how we’re reaching the fifth year of Hearthstone. We really want to talk about what we can do that evolves it to the next stage and really continues to be a game for everyone, or that you can play your way. This want to revisit single-player with all of the learnings from previous single-players was happening in parallel. As design and creative and everyone started talking on the team, this felt like a really cool opportunity to link the two in a way that helps us tell an awesome cohesive story, even more so, and also gives a good set of reasoning behind a single-player narrative that feels thematic and thought through.

GamesBeat: Why have the callbacks to Forbidden cards and other mechanics?

Thompson: Some of that is thematic. Some of that is the sense of, well, if these evil villains are coming back, they’re coming back stronger. They’ve learned. The fact that Madame Lazul gets to bring back the idea of the Forbidden cycle from Whispers of the Old Gods, the fact that, in the case of Rafaam specifically, he himself is a callback to the Golden Monkey from League of Explorers. And even when you get down to Hagatha, there’s this reminiscent effect of Echo present in one of her cards. One of the important things to call out there, though, is that rather than just pick directly from and re-appropriate the keywords or the direct mechanic in a way that might confuse new players, because they might not have been with us for Echo as a keyword, or some of these previous — certainly the Golden Monkey — it’s enough to allude to them, so that if players recognize them it breeds a sense of familiarity into these characters. Oh, they’re still up to their old tricks.

There’s that familiarity to that effect. But the fact that it doesn’t bear the echo name, or forbidden as an absolute mechanic, means that new players get to come along for the ride and have fun too. It’s a way we got to continue the story of these characters that felt very tied to this, up to their old tricks, using villainy that we’re very familiar with, while adding in some of these new things in the form of lackeys and schemes. 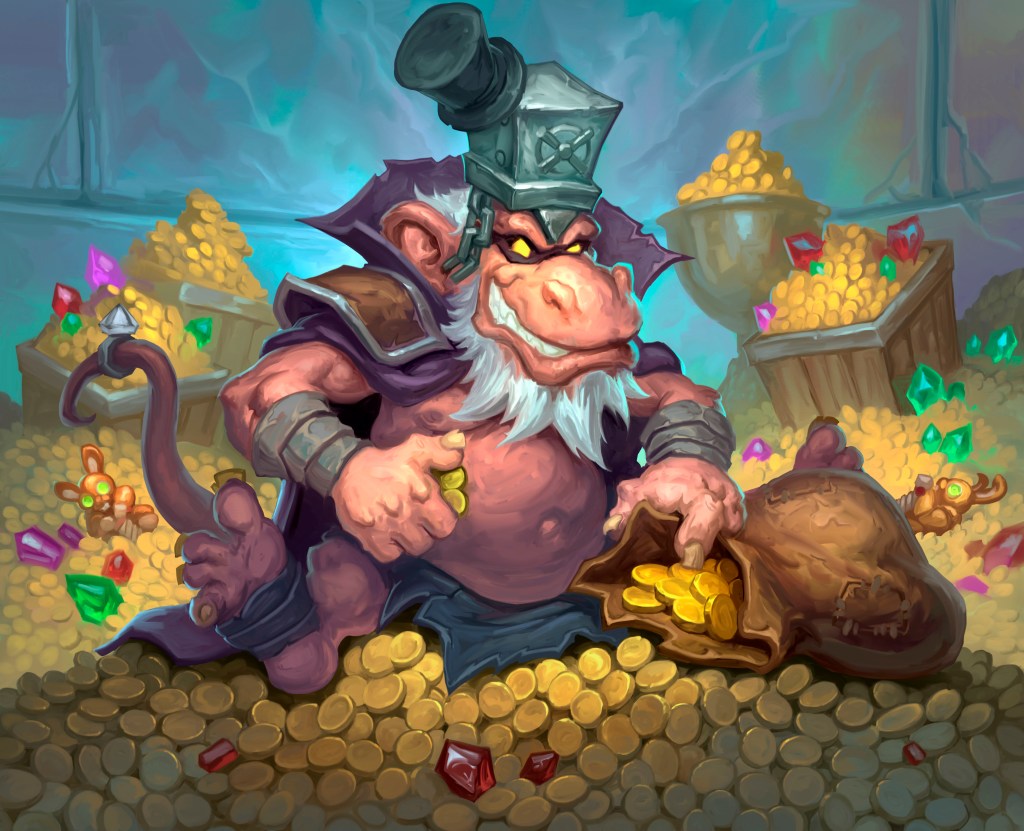 Above: Togwaggle want gold. He doesn’t care if it’s yours.

GamesBeat: This group of villains, to you, is it more like Spider-Man’s Sinister Six? Or the Legion of Doom?

Thompson: There was a lot of those metaphors as we were talking about it. What are some of the examples of these ultimate evil anti-hero groups that we’ve seen in the past lore of different things, be it movies, books, whatever? We talked a lot about what makes a compelling group of villains. Certainly the fact that you’ve had interactions with each of these, and then you get the mysterious Madame Lazul, who you don’t know a lot about, but you might want to know more, hopefully — it’s all a part of what makes for a — call it bumbling, but still inherently dangerous under the surface, if they ever actually get their act together. That’s where the compelling storytelling comes in, and that’s where [Hearthstone lead mission designer Dave] Kosak starts steepling his fingers and grinning. He knows what we can do with that.

Thompson: I think some groups or some people had kind of pet metaphors for it. But really it was never about one of these being more successful than another and more about, how do we do this in a way that feels like the Hearthstone take on a villainous league of five? For instance, some of the stories that came up internally, or at least some of the stories I was talking about with Dave — there was the idea that, of course there’s five of them, because the only thing they have to compare to is the League of Explorers, which is four. They have one more, so it’s obviously more powerful. And the idea that Rafaam gets to make the cool little metaphor of, aha, it’s five, like a fist! And that would confuse Togwaggle, because he looks at his own fingers and thinks, there’s only three, I don’t understand.

All the silly conversations that would end up happening. It’s obviously what led to the cinematic, where Rafaam is trying to sell the idea to this group, and they kind of get it — but not quite. They like the idea. They hear what he’s saying. But they’re going to need some convincing, because some of them aren’t that bright. Maybe others, while they’re bright enough, don’t see the inherent strength in numbers thing winning the day. It made for some fun conversations, which led their way back into the game.

GamesBeat: I never realized Togwaggle was a villain.

Thompson: I think Togwaggle has been convinced that maybe he should side with the villains. Maybe they’re even using language around him of, we’re not villains, we’re just getting back what was rightfully yours. It was stolen from you. You can’t steal what’s yours. I can see Rafaam engaging in some conversations like that.

GamesBeat: Or a case where the good guys turned him bad because of what they did to him, as we took his gold in Kobolds & Catacombs.

Thompson: Possibly? I think everyone has different motivations. That’s what makes for interesting characters. As soon as characters can define a set of motivations that inspire them, and that there are always shades of gray with these characters, and an outright black or white in terms of values here and there where needed, that’s where engaging and interesting stories happen.