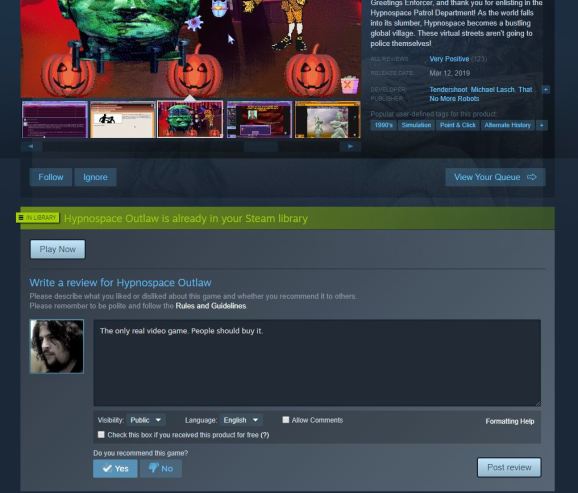 Valve is once again looking at ways to improve user reviews on Steam. As it turns out, it didn’t exactly fix the problem last time. In a blog post today, the company details how it plans to fight back against unrelated community trolling. In particular, Valve wants to identify and remove what it calls “off-topic review bombs.” A review bomb is when a group of players coordinate to hurt a game by giving it negative reviews. Valve wants to mitigate review bombs if they are unrelated to game content.

A recent, high-profile off-topic review bomb was for Taiwanese horror adventure Devotion. The game featured an art asset that referred to Chinese president as “Xi Jingping Winnie the Pooh Moron.” This is a widespread meme about how president Xi looks like the honey-loving literary character. And it’s one that Xi hates. Once Chinese players discovered the asset, they bombed Devotion’s user-review score.

A negative user-review score on Steam could hurt sales. And studios cannot appeal to Valve to change it. Valve doesn’t want to get rid of the tool because many customers rely on when making purchases.

“Developers understand that [scores] are valuable to players,” reads a Valve blog post. “But they want to feel like they’re being treated fairly.”

Here’s how Valve explained the new strategy: “We’re going to identify off-topic review bombs and remove them from the Review Score,” reads the blog.

Valve acknowledges that this new policy raises a lot of questions. Who gets to decide what is off-topic? If a developer is a Nazi and is giving money to white supremacists, I wouldn’t want Valve to remove reviews that say that. I also don’t want Valve to try to automate that decision. And it doesn’t plan to.

“Obviously, there’s a gray area here because there’s a wide range of things that players care about,” reads the blog. “So how will we identify these off-topic review bombs? The first step is a tool we’ve built that identifies any anomalous review activity on all games on Steam in as close to real-time as possible. It doesn’t know why a given game is receiving anomalous review activity, and it doesn’t even try to figure that out. Instead, it notifies a team of people at Valve, who’ll then go and investigate.”

The company says it has already tested this tool on its history of review activity. It claims that off-topic review bombs are rare. But they do happen, and Valve will deal with the issues on a case-by-case basis.

“Once our team has identified that the anomalous activity is an off-topic review bomb, we’ll mark the time period it encompasses and notify the developer,” Valve explained. “The reviews within that time period will then be removed from the Review Score calculation.”

Most important, Valve doesn’t actually plan to remove anything anyone writes about a game. So if you are mad about a developer calling you a “manbaby” because you’re afraid of women, you can still say that. But Valve may consider that off-topic, and it will eliminate your “thumbs down” from the review score. That will mitigate the effect of many of the worst review bombs because the score that’s next to the “buy” button will remain untouched.