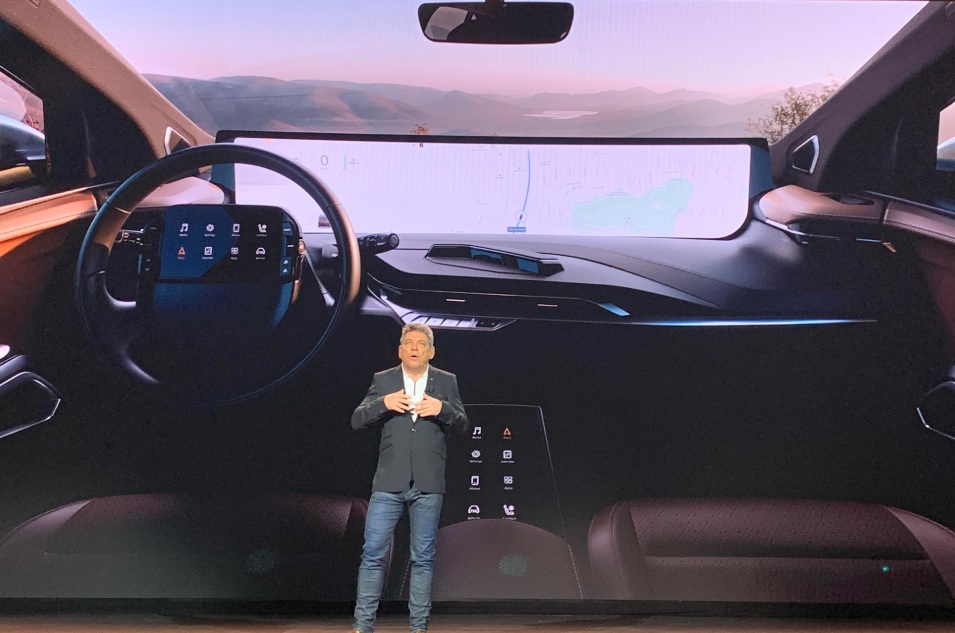 Above: Carsten Breitfeld, CEO of Byton, shows off the car’s 48-inch screen at CES 2019.

VentureBeat: I saw the Byton display. That’s a pretty big one, from one edge of your windshield to the other. The demo that Intel and Warner showed pretty much meant that the entire side windows and back seat side of your car would be one gigantic display for the passengers. That was pretty amazing.

Bergman: You get to see more demos than I do, but I do visit customers. I’m talking about mainstream stuff you’ll be seeing in two to three years, where you’ll have a display across the combined instrument panel and infotainment area that’s two or three feet across, with one continuous piece of glass, all touch-enabled. A Tesla on steroids type of thing.

VentureBeat: What do you find a lot of your competition coming from these days?

Bergman: It depends. Our classic stuff we’ve been talking about, the display and touch, we just don’t have U.S. competitors anymore. It’s typically Taiwanese competitors. Sometimes vertical competitors, like a Samsung. That’s one group of folks. There are probably names even you don’t know, like Novatek, EyeMax, those type of guys. When we talk about the voice, now we’re starting to compete with the big boys in the industry, like Qualcomm, Broadcom, MediaTek. We’re offering full SOC solutions, dual quad-core ARM type of stuff.

VentureBeat: In the foldable phones, are you guys in there as well?

Bergman: We certainly are working with many of the OEMs. I think at this point — I’m not sure there’s an officially launched phone.

VentureBeat: Is there enough activity there that you believe foldable phones are going to be plentiful?

Bergman: Not in the next two to three years. The whole idea of foldable is — at least today, in effect it’s two displays. They may connect, of course, but you’re doubling the cost of the display at a minimum. At least to me, in 2019 and 2020, any foldable phone will be above a $1,000 price point. I’m not sure — for someone like Apple that means very low volumes. 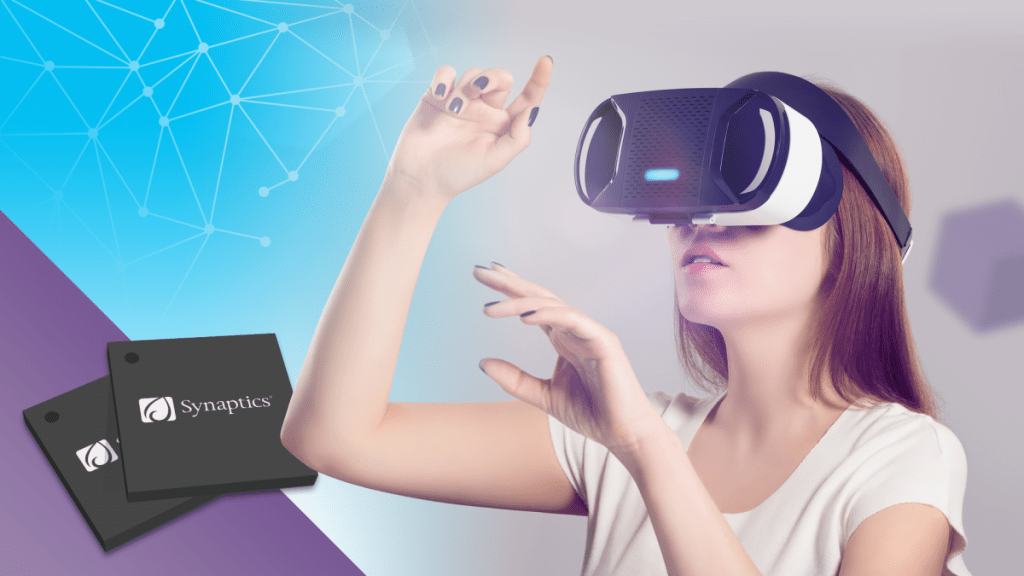 Above: Synaptics powers this VR device.

VentureBeat: For all these windows into what’s coming, I guess we still don’t know exactly what’s going to take off among all this stuff.

Bergman: We know it’s going to take off. It’s just a question of what year. I have zero doubt foldables are going to take off. I don’t know about you, but I still carry three devices. At least in the next couple of years, I want to eliminate at least one. They’re each very suited to their particular task. I think foldable will allow me to not carry a tablet anymore, to watch movies and so on.

I’ve been a huge fan of VR. I’m frustrated that it hasn’t moved faster. Maybe for someone like you that’s been in gaming forever it’s different, but looking at something — even a large display is artificially constraining. I hope we solve some of the bigger issues in VR pretty quickly, because I’d be really excited about what VR means, and not only for gaming. You could do incredible movies with a VR headset. That I’m starting to see. I don’t understand why there isn’t more focus there. But you have to start off with it in mind that this is going to be a VR movie. Eventually, filmmakers will catch on and it will fundamentally change the cinema experience.

5G, of course, that’s going to happen. That’s already happening. You don’t need a crystal ball for that one. Or maybe you do, because that one involves government officials. [laughs] That’s the only thing that will slow the rollout. There are a lot of exciting things happening in the consumer space. We see all the home stuff, too. The home is a fragmented market, so it tends to march a bit slower than some of the other consumer devices, like smartphones. But again, I think everyone’s moving to a highly connected home, with all these different devices. 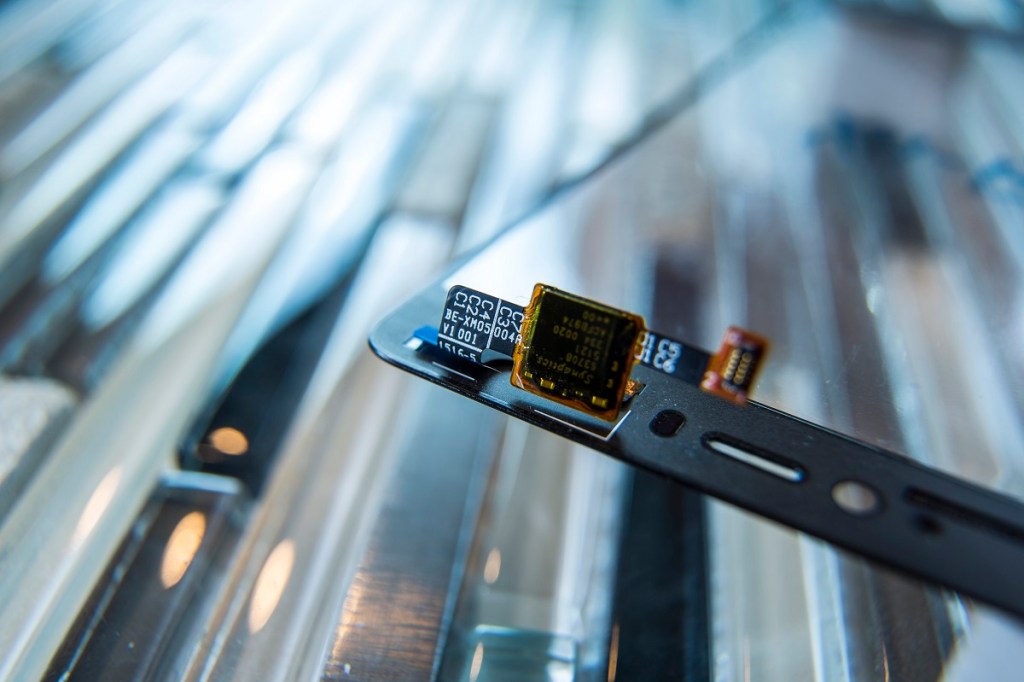 VentureBeat: As far as the consolidation in the semiconductor industry, what do you think about that? Is it finally slowing down a bit?

Bergman: One of the banks came in and showed us the consolidation trends. Their line didn’t show it slowing down. In fact, they mapped it against other industries. I think one was pharmaceuticals. I can’t remember the other one. Anyway, it was interesting, because it was different decades, but the actual trend line was very similar. I don’t see it slowing down, at least over the next few years. Scale certainly helps in the semiconductor industry.

Now, I can’t recall an announcement over the last three or four months. I’m sure there have been some. Some of it again goes to government regulation. When you’re either acquiring or being acquired, deal certainty is a key factor. If you have to get the Chinese or U.S. government to approve, the risk on this is going up 10 times. The truly international type of thing may end up getting hung up for a while. That’s slowed things. But I think the broader trend line, once we get through this rough road, will get back to consolidation.

VentureBeat: How much do you see Synaptics needing to dive right into all of the AI technology? Is it going to become a fundamental part of all of the components that you’re making? Do you become similar to a lot of the other companies that are chasing AI right now?

Bergman: Interestingly, AI is still fashionable. [laughs] We’ve been using AI in the last few years on our fingerprint recognition. We would train our devices to better understand your fingerprint over time, as an example. On our touch controllers, we also used it to understand an individual’s palm versus finger. We do offline training on that. On the voice-enabled stuff, as I mentioned, we’re putting in the hardware capabilities.

We clearly are believers in moving that intelligence to the edge. From a company level, we have zero plans to jump into the training side of things. Plenty of guys going after that are much bigger and have a huge lead over us. We’ll stay on the edge side. Every product we do now, we look at it and — you can add a neural network capability in a few square millimeters of silicon, so it’s not a huge cost. There’s emerging standards there, so you don’t have to do an onerous software support role either.

VentureBeat: Do you find you have to chase after some of the AI experts, the engineers?

Bergman: We’re fortunate. We’ve worked on some applications, so we have our AI team. Because we started early, three or four years ago, developing neural networks for fingerprint, we’ve been able to retarget that team to focus on IOT now. It was a good young team previously, and now it’s a very good, more experienced team.

VentureBeat: What’s your own perspective on how we’re doing with Moore’s Law?

Bergman: It’s definitely slowed down. Intel is a great example there, where they’re somewhat stuck on 14nm, and of course TSMC has split ahead of them. The cost return has slowed down on a global level, which has slowed the investment intensity to get to the smaller geometries. We don’t play in that space like AMD or Intel does, down in five or seven. But our 22nm chips are finishing. Now we’re working on 12nm. That’s a small minority of the products we do.

Bergman: No. If you have a high analog content, it’s way too expensive to even contemplate doing it. Our display driver devices tend to use older geometries because they’re basically large analog chips with a little bit of digital in there. Not a lot of benefit.

VentureBeat: That sounds like a good place to be right now.

Bergman: Avoiding the $10 million mass charges is nice. You can’t place too many bets, so you’d better be right. It’s hard in this dynamic market.

VentureBeat: How many people does Synaptics have now?

Bergman: We’re about right at 2,000. We did two acquisitions. We bought the old Conexant, and then we bought a division of Marvell about a year and a half ago. That popped us up from the mid-1,000s to 2,000. That’s the ballpark we’ll stay in for a while.

VentureBeat: Any other big picture things you want to share?

Bergman: We’re obviously shifting to be more of an IoT type of company, from our traditional notebook and smartphone products. Automobiles are a big growth area. We’re starting from a small base, so in the next few years our revenues will accelerate quite a bit as you see all these touch screens popping up in automobiles.

VentureBeat: I’m starting to review some of these new cars. I’ve got really old cars in my family, so I’m just not used to driving new ones. It’s fun to see all the new gadgetry, like heads-up displays.

Bergman: They’re trying to close the gap with consumer technology. I have a Tesla, which was certainly an eye-opener in comparison to other vehicles. I had a 12-year-old Acura before that, so I wasn’t exactly pushing the state of the art.