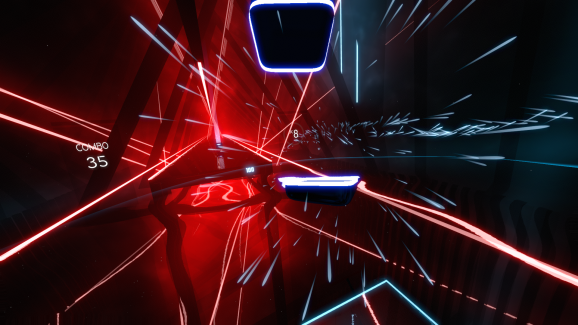 Beat Saber is the biggest hit among virtual reality games, and Beat Games is announcing today that the sword-fighting music game will be part of the Oculus Quest launch lineup.

Facebook’s Oculus VR division is launching the Oculus Quest, a wireless VR headset, this spring. And the company knows that it needs stellar content to make the Quest shine. Now, it has that with Beat Saber, which debuted last year on the Oculus Store (for the Oculus Rift) and PlayStation VR.

“Playing Beat Saber on Oculus Quest allows you to make literally any move you want,” said Beat Games marketing head Michaela Dvorak in a statement. “You can easily add that extra dance move, and that feeling when you don’t have to watch out for any cables is priceless. I’m a big fan of Rift, but Beat Saber on Quest is a whole new level of experience! Visuals look absolutely stunning, gameplay is smooth and polished, and tracking is just great. Watching the game evolve on this platform was pretty exciting.”

Beat Saber’s development started in 2016 when Jan Ilavsky, lead developer at Beat Games, decided to buy a VR headset. He tried several games, but nothing really caught his attention, Dvorak said. Back then, he was trying to figure out his next game idea, so he looked into the development of VR games in Unity, and several hours later, he had the first Beat Saber prototype ready.

Further development took Ilavsky and Vladimir Hrinčár about 18 months, and the feedback from early players was awesome. Jaroslav Beck joined the team to boost the game with his energizing electronic beats while Ilavsky and Hrinčár polished the game.

The object is to transform the player into a dancing superhero, as you use the VR touch controls to wield a saber — doing dances and getting a workout at the same time.

The addition of the free movement with wireless standalone VR — and the six degrees of freedom with the Oculus Quest — will be very important for the Beat Saber experience, Dvorak said.

“For me, the biggest plus is the accessibility of these types of devices,” Dvorak said. “No PCs, no cables, no waiting — you just put it on and play. You can take it anywhere with you and show it to your friends and family. With standalone headsets entering the market, more people will be excited to get into VR. The more people join the community of VR players, the more attractive it becomes for developers. This is an amazing way … to boost the VR industry.”