The University of Southern California has a reputation for running great undergraduate and graduate programs in game design. And today, it will take a big step to unifying its film and computer science game programs under the leadership of Danny Bilson.

Bilson was named chair of USC’s School of Cinematic Arts Interactive Media & Games Division (IMGD) in July 2017, and now he takes on the title of director of USC Games, taking over from former director Tracy Fullerton. In an interview with GamesBeat, he said his goal is to further improve the collaboration between the film school and computer science departments in the creation of ground-breaking video games.

Bilson is a writer, film director, producer, and game executive who held senior executive roles at THQ and Electronic Arts. He has been on the faculty of the USC School of Cinematic Arts since 2005, where he has taught screenwriting, narrative design, and currently leads the Advanced Games Project.

He most recently sold Da 5 Bloods, a screenplay co-written by himself and his late writing partner Paul DeMeo, to Academy Award Winning Director Spike Lee. He has recently consulted at Walt Disney Imagineering on elements of Disneyland’s Star Wars Land, as well as developed a new animated property in partnership with Film Roman and a drama series with Sonar Entertainment.

The announcement was made by Elizabeth Daley, the Dean of the School of Cinematic Arts, and Yannis Yortsos, the dean of the USC Viterbi School of Engineering.

USC Games will support both independent and major studio game development; foster a diverse student body that produces both creative and innovative content; continue to build wide-ranging curricula which cover a multiple of areas of interactive entertainment; and build a robust industry placement pipeline for students.

Key initiatives for USC Games will span several growth areas to include: hosting industry workshops where students design and work on commercial games with industry partners; building a robust job placement initiative for graduating students; the creation and design of games for health; as well as an expansion of design training and experimentation for board games. Other areas of focus will be strategic partnerships in the rapidly-growing location and theme-based entertainment space, as well as continuing to build the recently-announced, highly-successful USC Esports Union.

I interviewed Bilson about his new role and his views of the game industry and USC’s collaboration with game companies. Bilson will be talking about where games are going at our GamesBeat Summit 2019 event in Los Angeles on April 23-24.

Disclosure: My kid is going to the USC film school’s media arts+practice division. 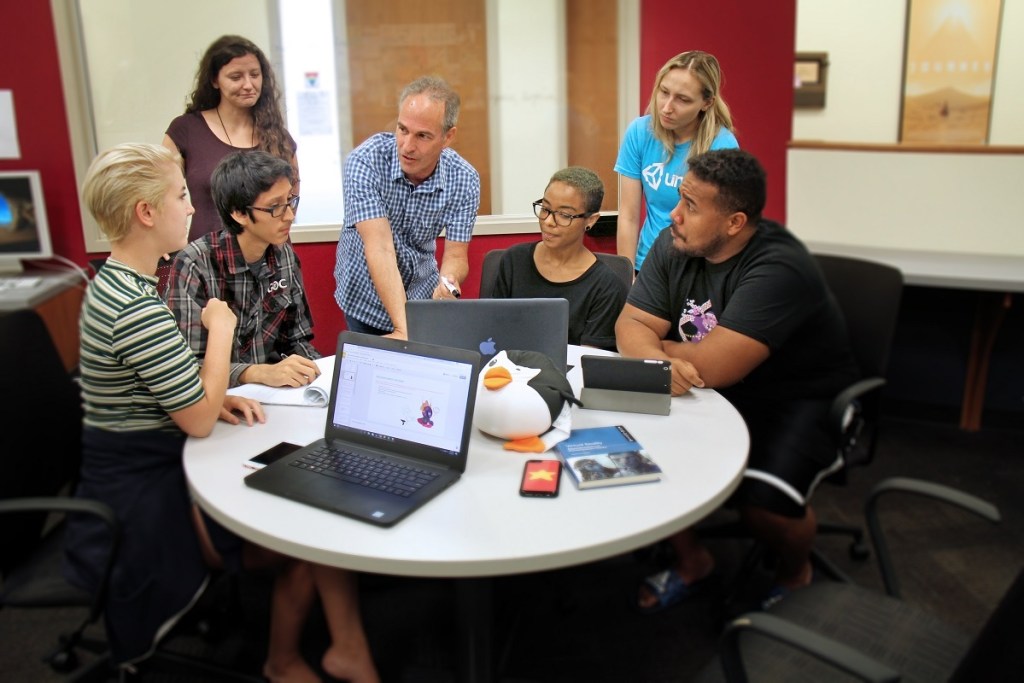 GamesBeat: Congratulations on the new title. It sounds like this was where it was going a couple of years ago, whenever it was that you got the last promotion.

Danny Bilson: We talked when I became chair of IMGD. One of my main goals was to unify the two schools, the engineering school, and our school, under the USC Games banner, which had been set up previously by Tracy Fullerton and some of the other folks at the school. But it wasn’t being executed in a thorough enough way to where there was a really great partnership between the two schools.

My number one objective was to make it better. It’s taken about a year of negotiating the official nature of the arrangement between Viterbi and the School of Cinematic Arts to get us where we are today, which is a kickoff to — I call it USC Games 2.0, but really it’s a fulfillment of the original vision.

To explain it a little further and make it simple, both sides, both faculty and all the curriculum, it all rolls up under the USC Games label now. We’re going to be doing a lot of things in the next year to update and improve the program. Which, of course, we can do when we’re unified. It’s much easier.

GamesBeat: What are some examples of this more collaborative structure?

Bilson: We have four or five goals put together. We have to update our curriculum because the world of free-to-play is a really important aspect of game development now. We have some classes in that, two important classes. One is sponsored by Zynga and one is sponsored by Scientific Games. But we need to build up that side of the program. We want to get our students managing a live game and running live ops before they graduate. We want them on a project to get that experience in school. That’s one of the goals.

The other most important goal going forward is building stronger industry relations for job placement. Our film school has a fantastic program for placing students. We want to do it as well as they do. They call it their First Jobs Program. We’re just starting to talk to industry about setting up that kind of relationship for our students.

Part of that, also, is having better communication with industry around what current needs are from a graduating student of a game design school. That changes all the time. Fortunately, most of us at USC Games are consumers of games and understand the industry and how it’s moving and shifting in its play patterns and habits. But we have to adapt our curriculum and our job placement program to support that so that our students are well-trained for the industry four years from now.

GamesBeat: It seemed like one of the things that have happened is that game design is just one small part of the jobs base now. The number of people designated as game designers seems small compared to the number of other jobs in a game company.

A lot of that comes through working together closely, but you’re right. In the future, our students have to have a general knowledge of all aspects of game development, and certainly specializations in one or two.

GamesBeat: There are some silos in the industry as well.

Bilson: Yeah, but the way games are evolving as an entertainment art form — one thing is narrative in a stronger form than ever before. We’re a great storytelling school. This is just one aspect of the curriculum, but there will be more narrative classes for our technicians, as well as our designers. In games, everything is storytelling. The art form has evolved to a point now where it can tell stories as well as books and films. We have to develop talent that can do that.

Again, that’s one aspect of the art form, narrative. There are so many aspects to game development, to making a great game. We have to cover all the bases and teach them for, as I said, three or four years from now.

GamesBeat: What are some other goals that you have in mind?

Bilson: We’re going to get back to something that we used to do years ago, which we called game industry workshops. These are more industry-sponsored labs where our students are working on commercial products or iterating on commercial products and inventing more things in the space. We’ve partnered with industry and they share their tools and technology with our students generally, and our students work with their hardware and software to develop products for them, but most importantly to innovate. That’s what we do at a research university. That’s what our students do, to invent the game industry of the future and not repeat what we do now. Every lab we set up, or game industry workshop will be a very strong innovation point.

Another area we’re pushing into is next-generation location and theme-based entertainment. Think of it as where live-action role-playing meets 3D projection and inventory and actors and costumes and sets. We see it as an interesting place where storytelling and technology and game design and interaction are meeting for the future. We’re partnering with some very interesting people. I can’t announce them yet, but in that space. It also ties to our minor in theme park design. We hope, in the future, to turn that into a proper degree down the road. That’s another one of our longer-term goals. 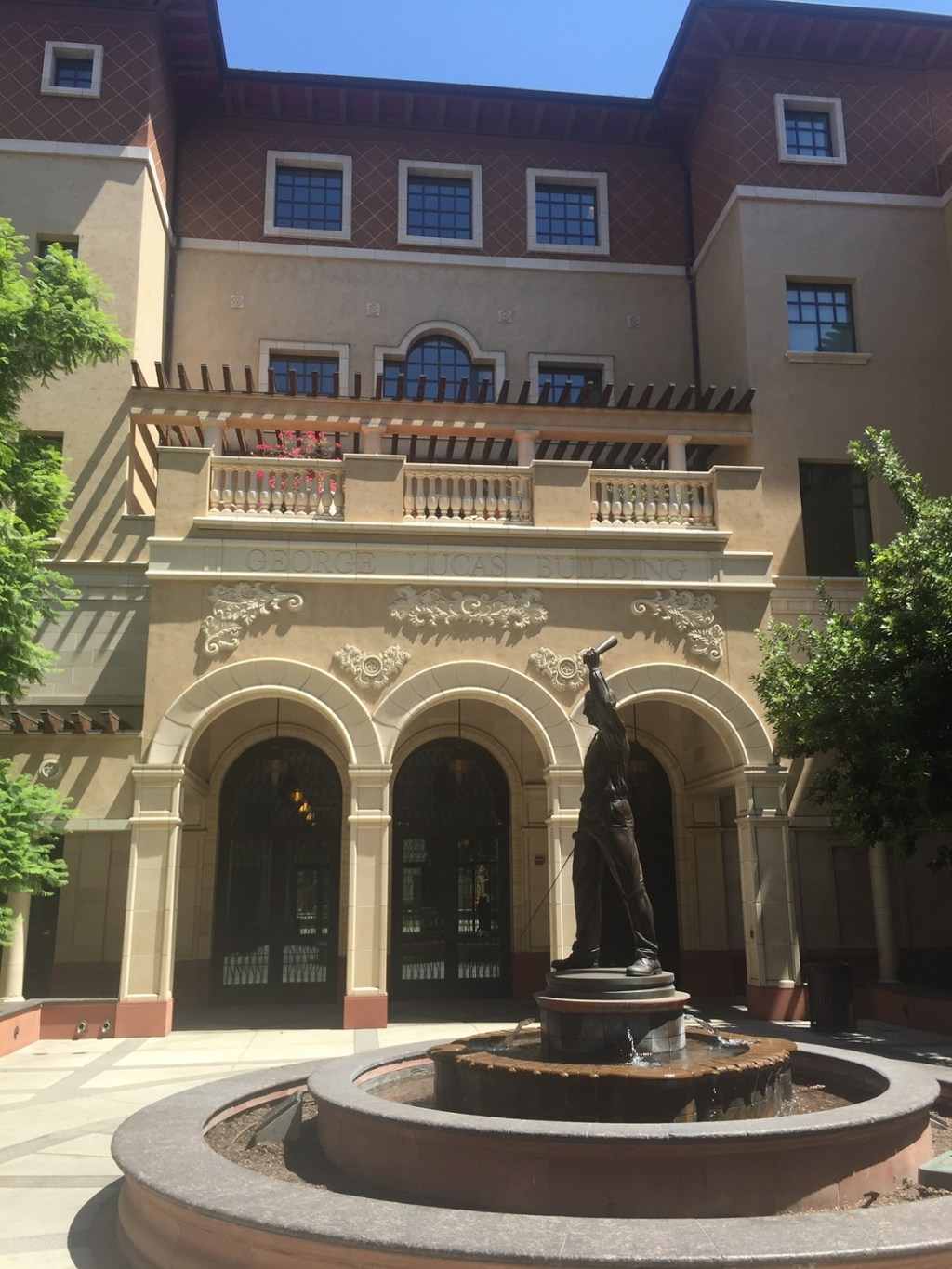 Above: USC School of Cinematic Arts

Bilson: No, it’s more like some of the things you’ll be seeing in Galaxy’s Edge at Disneyland, where you’re connecting some lightweight role-playing to the activities in a physical space, using costumed hosts and actors to integrate with guests or participants. Usually, you use a smartphone app to hold your inventory and move the story along, but there are lots of different ways to do this. It’s an exciting nascent art form that a lot of people are interested in for the future.

Bilson: It’s like the Void with more role-playing. There are lots of ways to do this, and many places for technology to lift this new art form up. I also wanted to talk about — one of the major investments is going to be in games and health, under Marientina Gotsis’s leadership. She has a lab that works in places where games can help people. We’re starting to put a project every year into our capstone production class out of that lab. We’re going to do a project every year to educate and/or help people, not just entertain them.

Building out that division or aspect — we already host a secondary degree there, but we want to invest in that and build that out, because along with entertainment if we can do anything to contribute with our art form to society and people’s health, we should. There’s a lot of enthusiasm around that. We can also have some interesting partnerships with people in the health field. As an example, we’re looking at carpal tunnel syndrome on keyboards and different health aspects around esports.