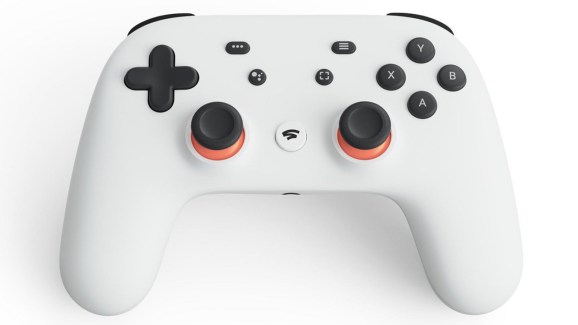 The Stadia controller from Google.

Google revealed its Stadia game-streaming platform today at the Game Developers Conference 2019 in San Francisco. The service enables players to begin playing high-end video games over the cloud with the press of a button. You don’t need hardware beyond a connected device with a screen. But Google is still putting together some polymers and plastics to create the Stadia Controller.

This device looks similar to a lot of other modern gamepads. It most closely resembles Nintendo’s Switch pro controller, but with one extra face button. It also doesn’t have offset analog sticks, so it’s more symmetrical — like PlayStation’s DualShock 4.

But Google did pack some interesting tech into the controller. And one of its most impressive capabilities could help reduce the lag of streaming a game over the internet.

Traditionally, you would want to connect a controller directly to your Xbox One, PlayStation 4, or PC. But that would introduce a number of barriers between you and the game with Stadia. You don’t want the controller connecting to the app and then to the game. And that’s not how Google built this device.

Instead, the Stadia Controller uses Wi-Fi to connect directly to the game in the cloud. This bypasses a lot of the potential hurdles that could cause input lag. You may still get visual latency — we haven’t tested Stadia yet. But a direct-connect Wi-Fi controller should go a long way toward making games feel snappy and responsive.

The Stadia Controller also includes a Google Assistant button and a built-in microphone. This gives you control over standard Google Assistant functions, but the company is also creating a tips service as well.

If you get stuck in a game, you can ask for help. And Google claims that it will provide info to help you clear a stage or some other sort of problem. You can do this without Stadia, but Google’s gaming service can provide results based on the context of where you are in a game.