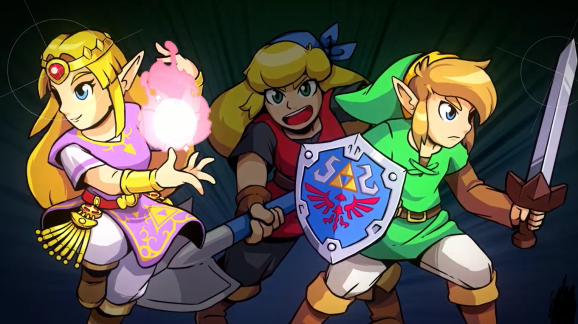 The Nintendo Switch has been good to indies, and indies have been great for Nintendo. Switch has become a hot system since its March 2017 release, and indies like Stardew Valley, Celeste, and Dead Cells have helped fill the home console/portable hybrid library with some of the most engaging and highest-rated games of the last few years.

Nintendo and indie gaming’s relationship is going so well that the House of Mario is willing to let Crypt of the Necrodancer studio play with The Legend of Zelda license, one of Nintendo’s most important properties. During the Game Developers Conference 2019 this week in San Francisco, I had a chance to ask Nintendo about this new evolution in their indies relationship.

Kirk Scott is one of Nintendo’s biggest advocates for indie gaming. He’s the company’s manager of publisher and manager relations. His Twitter bio calls himself the “Nintendo indie (Nindies) guy.” Katie Casper, Nintendo’s specialist of publisher and developer relations, and Scott hosted Wednesday’s Nindies showcase, which included the announcement that former Microsoft exclusive Cuphead is coming to Switch.

Somehow, that wasn’t the showcase’s biggest surprise. Cadence of Hyrule is the first time than an indie studio gets to make a game based on a Nintendo franchise. Sure, larger companies like Namco and Capcom have helped Nintendo developer some big titles (Capcom even worked on Zelda games itself, including Oracle of Ages and Oracle of Seasons for Game Boy, and The Minish Cap for Game Boy Advance). But those are established, big companies. Brace Yourself Games only has 20 employees listed on its website.

Do more indies get to play?

Is this the start of a trend? Nintendo has seen the power of indie gaming. Not only does it know that indies can sell, but Nintendo understands the talent of many of these studios.

But are we going to see more indie developers get to play with Nintendo’s IP? That’s a question I asked Scott when I got to talk with him at a Nindies showcase.

“I hope so. I totally hope so. Yeah, this is great,” Scott told me. “I think this is validating for a lot of indies out there.”

That’s easy to believe. Many indie developers were inspired by Nintendo franchises like The Legend of Zelda. Heck, I’ve played several indie game demos at GDC that pay tribute to Zelda, including the roguelike Sparklite.

And now these studios know that it is actually possible that they could get an opportunity like Brace Yourself Games and work directly with Nintendo.

This gives Nintendo a great opportunity. It can release new games within established franchises without having to commit their own (often huge) teams to the project. Nintendo already released a major Zelda game, Breath of the Wild, for Switch when the system launched. A remake of the Game Boy classic Link’s Awakening is coming to the system later this year.

The spring release of Cadence of Hyrule gives Nintendo a way to put even more Zelda on the Switch, and this time with a concept (rhythm-based gameplay) that the series hasn’t focused on before. Why wouldn’t Nintendo want to do the same for Mario, Metroid, and more? There are a lot of other great indie studios out there.