John Riccitiello, the CEO of Unity Technologies, has always liked Tim Sweeney, the CEO of Epic Games, and the healthy competition between the game engines that both companies make. Unity rose from the low end, capturing mobile game developers and then pushing its way upward.

Epic Games started at the high end with games that had outstanding graphics, and it worked its way down so that Unreal games can run on PC, console, and mobile devices. But Epic makes its own games, and Unity doesn’t. Since its Fortnite battle royale mode took off, Epic has been collecting a lot of revenue from its players, who now number about 250 million. And that has enabled Epic to create a $100 million fund for game developers.

That bothers Riccitiello, as it feels like Epic is buying customers. Sweeney said this week that the Epic MegaGrants have no strings attached, but it still bothers Riccitiello. I talked with Riccitiello (and Sweeney) this week about this topic and other things like Google Stadia, and where the next billion gamers will come from. We spoke at the Game Developers Conference. 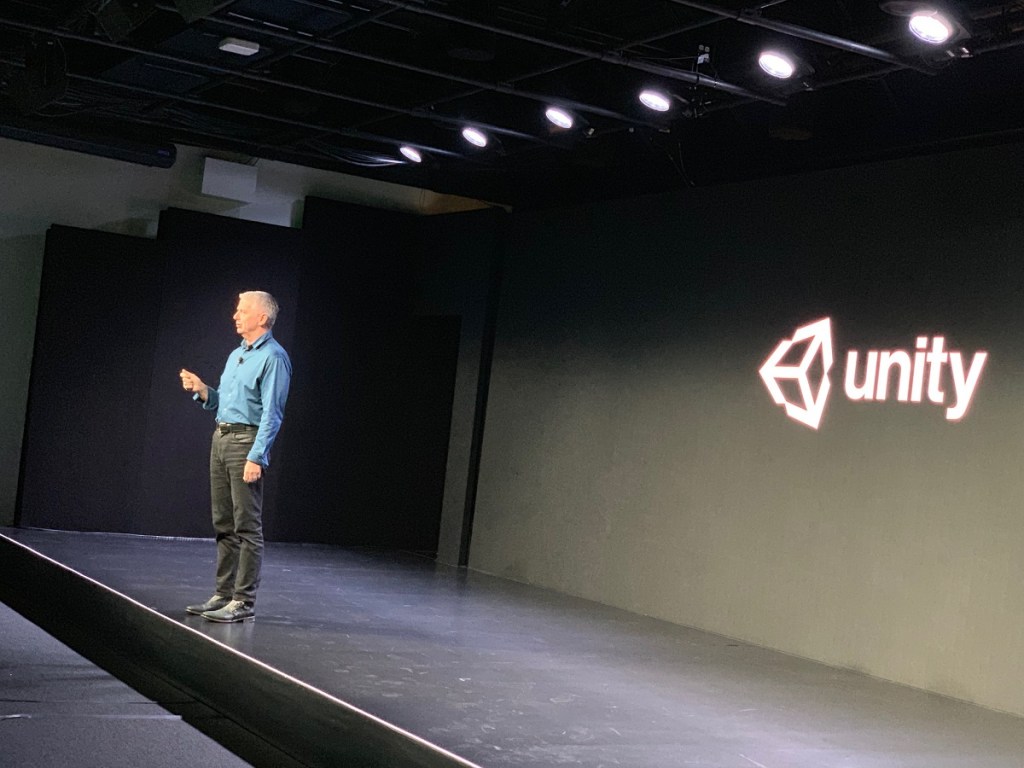 GamesBeat: How is GDC for you, as far as all the things you’re seeing announced?

John Riccitiello: GDC seems like a new E3, but with a technical bent. Lots of announcements now. Generally, it’s what we all expected. I don’t know that there’s anything at the industry level I didn’t know about a year ago that’s coming now. No giant surprises.

GamesBeat: Google still surprised me with how aggressive or ambitious they seem to be.

Riccitiello: They’ve been talking a long time, though, since before Phil got there. It wasn’t a surprise if I knew about it a year ago.

GamesBeat: Do you think it’s so ambitious that it changes a lot of things, changes strategies around the industry?

Riccitiello: Other than Nintendo, tell me a major company that’s not building a streaming solution.

GamesBeat: Sony doesn’t seem to be doing much with theirs.

Riccitiello: But I’m pointing out, they have one. Calling streaming surprising when you can only come up with one company that’s not doing it–look at the Amazon website. You have Microsoft, Google, Amazon, Sony, and whoever jumps in next. It could be Netflix. I don’t know. I just think a lot of people are at that. Look at Ken Moss’s blog from EA about that. Andrew’s giving talks about it. It’s such a present notion.

GamesBeat: What feels different — I remember OnLive talking about how they got their first data center up, and then their second, and then they could cover the whole U.S. That was the thinking 10 years ago.

Riccitiello: I remember talking to Steve Perlman back then. It was 2005. I told him his plan wouldn’t work then. Anyway, for what it’s worth, there’s something here. We’re in the middle of it, because we provide the technology for most of the stuff that goes up there.

GamesBeat: We always knew these data centers were going to come in handy for a lot of things. Each one of them built it for their reasons. Amazon built it for e-commerce and then web services. Now they have this extra use, with all the GPUs in there now.

Riccitiello: At no point, I think, did anybody ever think that the right answer for your computer is it’s an isolated box in your living room and it doesn’t talk to anybody else. Go back to Star Trek, when all you could go out and buy was a pocket calculator. The image of a computer was this thing you spoke to and had knowledge of the universe, which had to be on a server someplace. 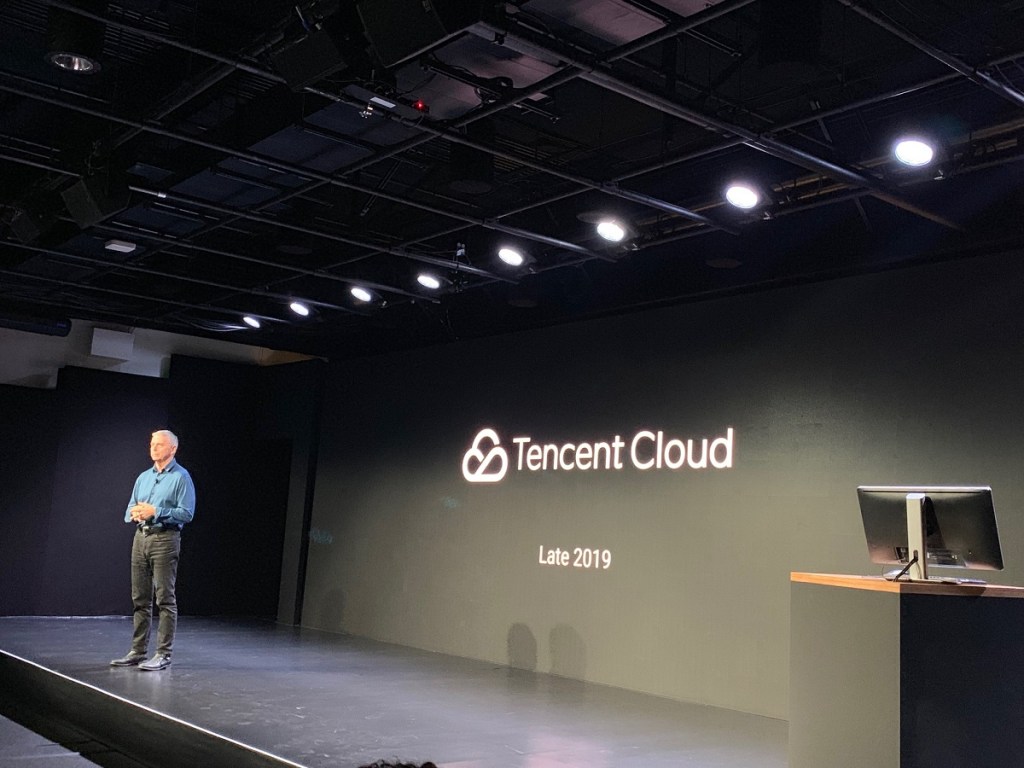 Above: Tencent Cloud onstage at GDC.

GamesBeat: Do you think making games for these data platforms will be different? I caught Ubisoft boss Yves Guillemot afterward and asked him if there was a different path to getting a game down now. He said, “A little different.”

Riccitiello: Not as different as PlayStation 2 was from Xbox. There’s more difference between those. Basically, everyone’s centered on a PC architecture, ever since Sony and Microsoft brought in the last generation of consoles. Now, there are different things that I can’t tell you about, because I’m under NDA to fucking everybody, as far as how they differentiate and what they emphasize. But it’s within a relatively narrow band in terms of impacting content creation.

With Unity you write once and you get it without doing anything. That’s the whole point. We flatten that, and we live in that arena. That’s exactly where we live, how to cover that waterfront super efficiently.

Riccitiello: Just the editor, the way it’s always worked. We create the code. You write scripting languages and use the editor and then we create the code for iOS or Android or HoloLens or PC or Mac or Xbox. That’s what we do. Then, when you get to things like burst compiler and the ECS systems that are much more advanced architecture for parts are built and deployed, we’re producing assembly language. You don’t have to know how to do assembly in order to take advantage of that Unity platform.

GamesBeat: For you, do things change much in this world? Is it business as usual?

Riccitiello: Well, describe business as usual. We were doing low-end mobile four years ago. We had maybe eight or nine percent market share. It’s 50 now. Is that business as usual? We didn’t support high-end anything. We have lots of triple-A being built on Unity. We didn’t support AR/VR. Now most AR and VR is built on Unity. We didn’t have a monetization platform or cloud services. You watched our event. The velocity on R&D is breathtaking. 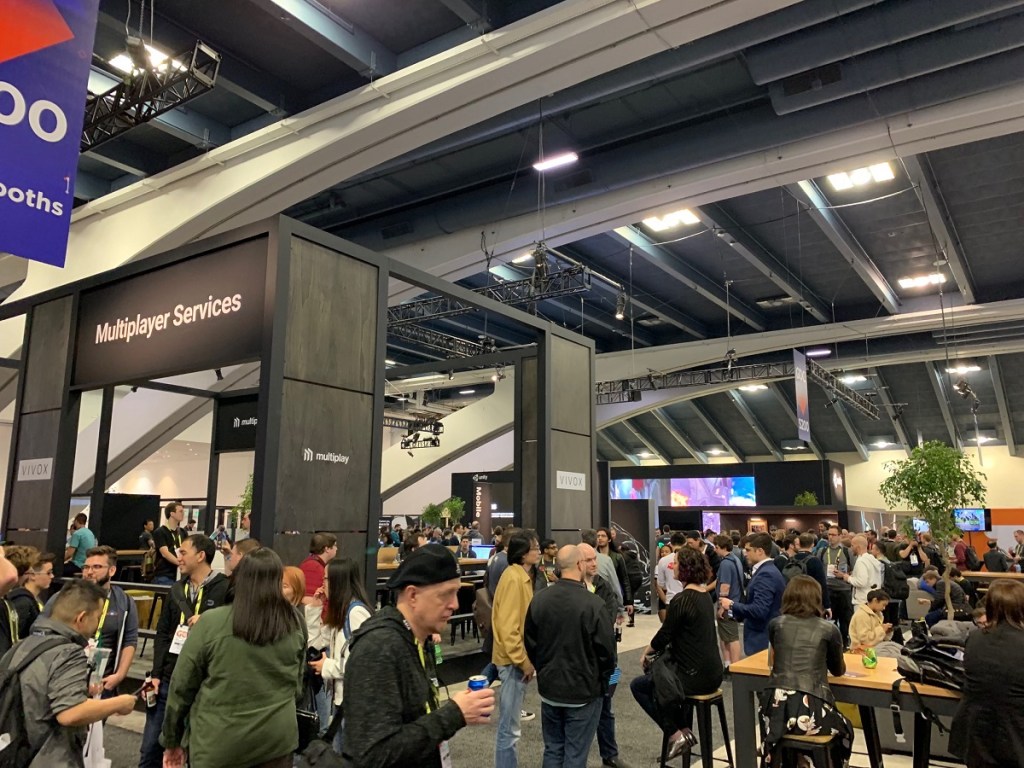 I’ve looked at the demos from Crytek and Epic and various events and releases. The worst you could say is we’re at parity, and I think you could get a better-looking demo than they showed, for humans and for raytracing. I think ours look better. They look fine, I think ours look better. I don’t know if that’s actually fundamental to the tech, or just the artists that use the tech. But the point is, once upon a time you would have said that on ease of use and more platforms, we win, but you’d have to say now that we’ve caught up. That’s a big change. I’m not sure there’s anything normal or status quo about that.

GamesBeat: One thing that’s different is that they have more riches from Fortnite to spread around and help their cause.

Riccitiello: I’ve been told by six people today that they were “bribed” to change to the Unreal platform. 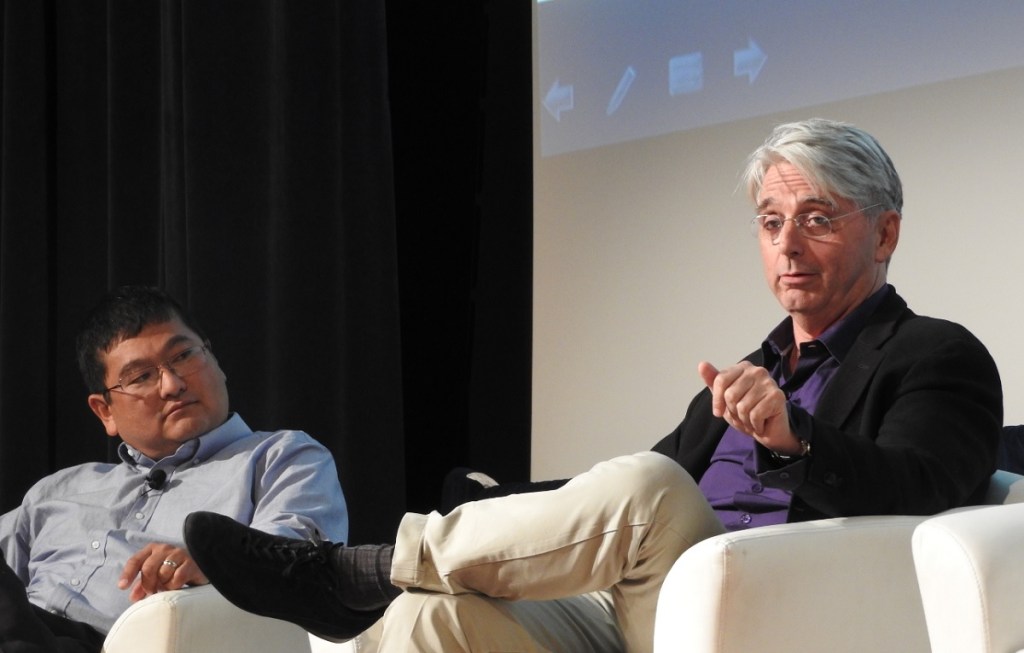 Above: GamesBeat’s Dean Takahashi and Unity CEO John Riccitiello at the VRX event. He warned about the VR gap of disappointment.

GamesBeat: The store, or the engine?

Riccitiello: In some way, shape, or form, they were given money to switch engines. I just had major developer from a very large studio say, “We’re going to stick.” They’re on their own tech and they’re going to move to Unity. He was sitting right there an hour ago and said, “How do you feel about how they’ve offered me a shitload of money to use their tech?” And my response is, “Would you choose to use their tech for money?” The answer was no. He was testing whether I’d offer money.

We’re in kind of a weird spot, when companies are–I don’t know. Imagine if there was somebody in the aisle at the grocery store. You happen to be a Coke drinker and a guy from Pepsi says, “Here’s 10 bucks, buy Pepsi.” What does that say about Pepsi? It’s just a little creepy. But having said that, I think Tim’s a good guy. Their platform is solid. Fortnite is an amazing success. They’re a customer. They use my tools.

GamesBeat: It doesn’t sound like the no-strings-attached part is really that true.

Riccitiello: I’m looking for the Unity developer that doesn’t use Unreal and doesn’t use their store. Seriously. You could be the guy who takes 10 bucks in the grocery store and walks out with a Coke. But I don’t think there’s going to be any of those. Look, I think they’ll grow past that. I have six million developers. Even Tim can’t give half a million dollars each to six million people.

As much as we think it makes sense, which is a lot, we’re turning the Unity engine into something that is as easy to use as Photoshop, but more powerful than Unreal or Frostbite. I want to give people power, and I also want to give them flexibility. I touched on that point yesterday. What I believe developers should be doing when they have strong technology teams is building modules for where they need a point of differentiation. But why would you cover the waterfront building a tool as broad and capable as Unity? That gives them the perfect outcome. It gives them all the power. If they see something they can incrementally differentiate, because our product is built in packages, and go do that.

The benefit is–I’m under two- and three-year NDAs for more platforms than I can count. We’re working on engineering outcomes for things my customers don’t know about. We’re an open platform. They can use any services they want. But I think that what we’re going to do is give as much advantage to the developer as we can, without bribing them. The notion there–it just hits me in an unsavory way.

I know Tim, just for absolute clarity. He’s one of the most honorable people I know. He’s driven by doing the right thing. At the moment–I guess it’s sort of flattery. Four years ago they ignored us, what we did and what they did. Now, to a degree, they look like they’re pacing their communications around us. But then on the other hand, we probably have three to five times their position on console and PC in terms of amount of content, and 50 times on mobile. I think he doesn’t want to lose his position as a technology provider in addition to a content builder.

I understand that. It’s competition and they should compete. At the same time, I really like him. I talked to him a couple of times last month. I think he’s a good guy. But it’s getting a little weird out there, when–I don’t know. We shall see where it all goes. I don’t think he’s going to try to buy everybody’s customer.