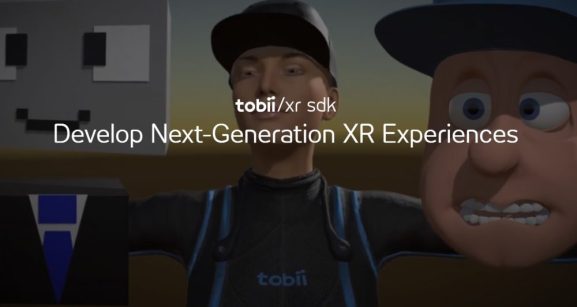 Eye-tracking specialist Tobii is honing in on VR and AR developers at the Game Developers Conference 2019 this week.

The company yesterday announced the launch of its XR software development kit (SDK). It’s a set of tools and resources designed to get developers up to speed with its eye-tracking tech. Using the kit, creators can implement features like gaze-based selection and eye-tracked interfaces. Tobii also says it includes tools to mirror a user’s eye movements on a VR avatar for social VR applications.

To accompany the news the company also launched an updated developer portal.

Eye-tracking as a key part of VR’s future. Not only because it enables new forms of interaction and social VR capabilities but because of performance too. One day the tech will be used to enable foveated rendering in VR headsets. This is a process that only fully renders the exact part of the VR display users are looking at. The rest of the screen isn’t fully rendered, but the difference can’t be seen in your peripheral vision. This greatly reduces the demands on whatever’s powering the VR experience.

That said, eye-tracking isn’t yet a feature in most consumer VR headsets. The newly-announced Oculus Rift S doesn’t include it, for example. Tobii itself partnered with HTC to implement its tech in the upcoming Vive Pro Eye, but this is an enterprise-level device. Some form of eye-tracking could also be integrated into Valve’s still-unannounced SteamVR headset.