Hypercasual games have seen unprecedented growth over the past year. Using the average lifetime value of hypercasual players based on data from ironSource’s platform on user level revenue, we estimate the approximate market for hypercasual games to be in the region of $2 billion to $2.5 billion in annual revenue. Even Goldman Sachs is getting in on the game with a $200 million investment in hypercasual powerhouse Voodoo. That’s why we decided to take an in-depth look at the size of the market for hypercasual games, what’s fueled its growth, and what its impact has been on the wider industry — is it cannibalizing other genres and just how sustainable is it really?

To understand the effect that hypercasual games have had on the industry, it’s important to understand why this genre exploded at such a fast rate. There are two main reasons for this — the demographics and behavior of today’s mobile game players, and what kind of games appeal to them. The image of the gamer is not what it used to be, with a third being over 45 and women representing 55 percent of the market — not the typical image of the hardcore gamer. The EEDER report on mobile and tablet gaming further reveals that how and when people play games is also changing. Instead of lengthy playing sessions, the No. 1 time people play games is while multitasking at home, followed by waiting for someone, while on traveling, taking a break, and then in the bathroom.

In all of these situations, players are increasingly looking for low-commitment entertainmentthey can enjoy in short bursts. Hypercasual fits well with this trend, as they are click-to-play games. Taken together, this updated picture of the gamer is one ideally placed to respond well to hypercasual games. 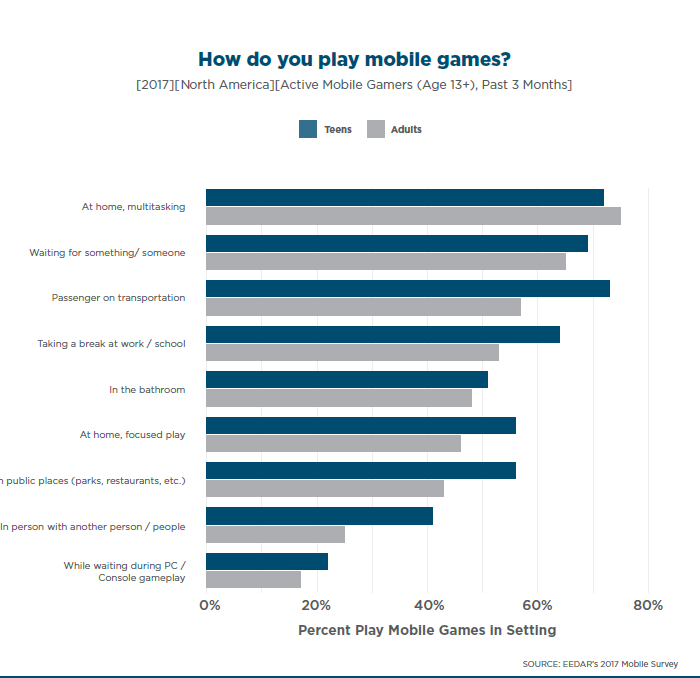 The second reason is related to hypercasual’s move from relying on cross-promotion as their primary user acquisition strategy to cracking UA at scale. As ad monetization became a more lucrative revenue source and ARPU went up, hypercasual developers were able to bid more competitively in the UA market. They also honed their design capabilities, investing heavily in creative optimization in order to drive up their IPMs (installs per thousand impressions). For example, a hypercasual game with a high-performing playable ad could bid 40 cents and generate an IPM of 50, versus a midcore developer bidding $5 with a less powerful creative driving an IPM of 3. This ultimately allowed hypercasual developers to make relatively low bids compared with other genres, and still generate eCPMs which were extremely competitive.

One of the biggest concerns around hypercasual games, is whether or not this new genre has helped grow the market as a whole — bringing in players that are new to mobile gaming — or if has it simply cannibalized from other genres. And if it has brought new users to the market, are they ones that can be converted to players of non hypercasual games?

On the face of it, yes, hypercasual games have brought new players to the market. A few years ago, Facebook and Google were the only real viable options for UA, since triple-A, midcore, and casual publishers focused on IAP, rather than ads, as their main source of monetization, which meant there wasn’t a huge amount of in-game inventory to market on. The intro of hypercasual publishers like Voodoo, Kwalee, and Playgendary brought a huge influx of impressions into the market, not only expanding the overall amount of available inventory but also doing so with inventory ideally suited for hypercasual UA campaigns.

Quality of the new inventory

So we’ve proven that hypercasual games can bring in new gamers to the industry, but are these users high-value players who will go on to make in-app purchases or engage heavily with ads? Here is what we saw:

Even if the quality of these users were lower on average, hypercasual games still provide a huge opportunity for IAP advertisers to acquire a lot of new users. It’s then up to them to ensure they adjust bids and optimize creatives so that they’re only acquiring quality ones.

We’ve established the huge growth in installs that hypercasual has brought to the market, and with it, a surge in the number of available impressions. But who’s winning these users? 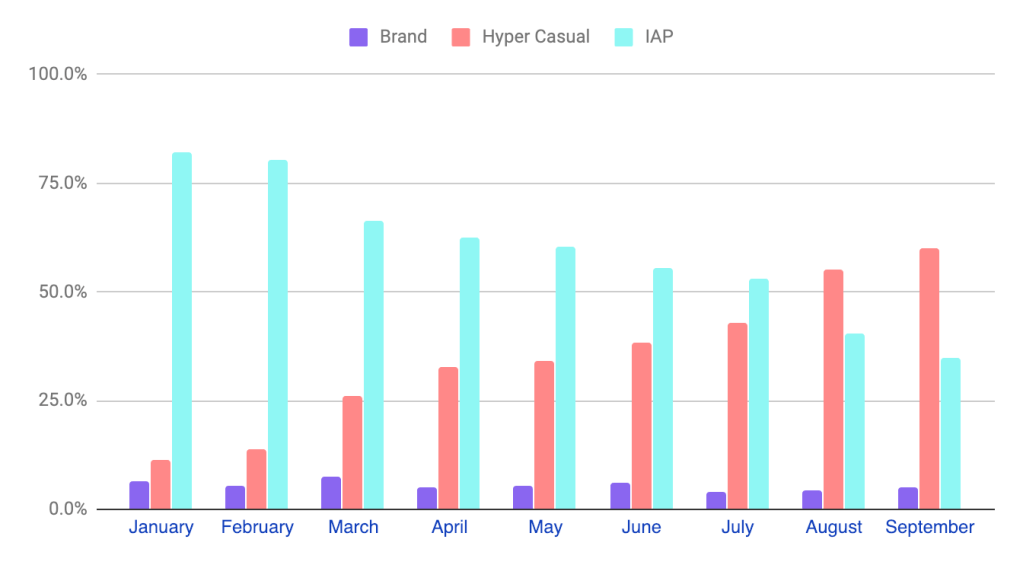 Hypercasual in 2019: Sustainable or not?

Despite the huge growth in hypercasual games, they are unsustainable as a standalone genre. Somewhere along the line, money has to be generated as users move from one game to the next, and in a solely hypercasual world dominated by ads as opposed to IAP, that doesn’t happen enough.

We see that about 60 percent of hypercasual inventory is sold to other hypercasual advertisers – in this equation no money changes hands. Out of the remaining 40 percent, about 33 percent goes to IAP advertisers and 7 percent to brands — this advertising spend is what makes the hypercasual economy sustainable. The future of the hypercasual economy is therefore heavily dependent on whether IAP games learn how to effectively buy on hypercasual inventory and continue to increase budgets. Just like the learning curve of buying on Facebook, IAP buyers must learn optimization techniques, like improved creatives, to better understand hypercasual users and how to monetize them after install.

Additionally, brands are increasingly understanding the value advertising in-game with rewarded video can bring to them in terms of high-quality and engaged users, and high viewability. So, as brands increase their spend in-game and as IAP games learn to buy more effectively on hypercasual, the category will continue to grow throughout 2019.

Will hypercasual be around in 2019? Definitely. And I’m sure the rest of the industry will be watching this space to see exactly how.

A veteran entrepreneur with 12 years experience, Omer Kaplan is the CRO and cofounder of ironSource.