The Lord of the Rings: Gollum will be an action-adventure. All the information we’ll reveal on Monday. The release date is 2021. It’ll be the first game in a series of games. It will be premium. It will come out on all relevant platforms we have in 2021, which means, after the announcement from Google, this is for sure PC and console, but with that technology it seems like you should also be able to play on your iPad or whatever.

GamesBeat: But it won’t be on Netflix.

Fichtelmann: [Laughs] As I said at the start of our conversation, if there’s any chance to have a version which is more or less—more easy to play, or let’s say a story version of an action-adventure game, I think there’s a good chance at seeing it on a portal like Netflix. It depends on what these guys are doing in the future. Having in mind what Black Mirror did with Bandersnatch, I think there’s much more fantasy there, doing interactive things with the medium. This is something I’m very convinced that we will see in the future: new formats between TV series, movies, and games. I personally think that Daedalic is one of the go-to guys when it comes to interactive storytelling. But for now we’re concentrating on two productions internally. One is Gollum and the other is an RTS we’re producing right now.

GamesBeat: The Lord of the Rings has some good games that were made in the last decade. How are you going to beat those?

Fichtelmann: One of the reasons Middle-Earth Enterprises decided to work with us is—you already mentioned, for instance, the Warner games. These are fantastic games. But when it comes to deep storytelling, then I think our approach is a different one. Especially the Tolkien estate, they like to see a company doing something else with the license. This is the reason we finally could secure the license. That means we’re now giving our version of what’s possible with the license. Maybe not a fast, action-paced RPG that we saw in the past.

Now, we’re doing it with a deeper storytelling approach in an action adventure type of game. Imagine Lara Croft or Uncharted without that much fighting. Some of the mechanics are clear — stealth, climbing, tricking other characters. But one thing that’s also quite important for us is to do something that’s unique. You said that this is ambitious, but it’s also unexpected. This is quite important. If we then hopefully create a great experience, then there’s no more need to another Gollum game. Which then means, hopefully the game stands for the next 30 years. You have all the possibilities, which means that we then created something that stays—graphically, it means we don’t go too deep into the uncanny valley. We’ll try to do something that, when it comes to colors and shapes, is something that can stand like The Lion King from Disney, for the next decades. 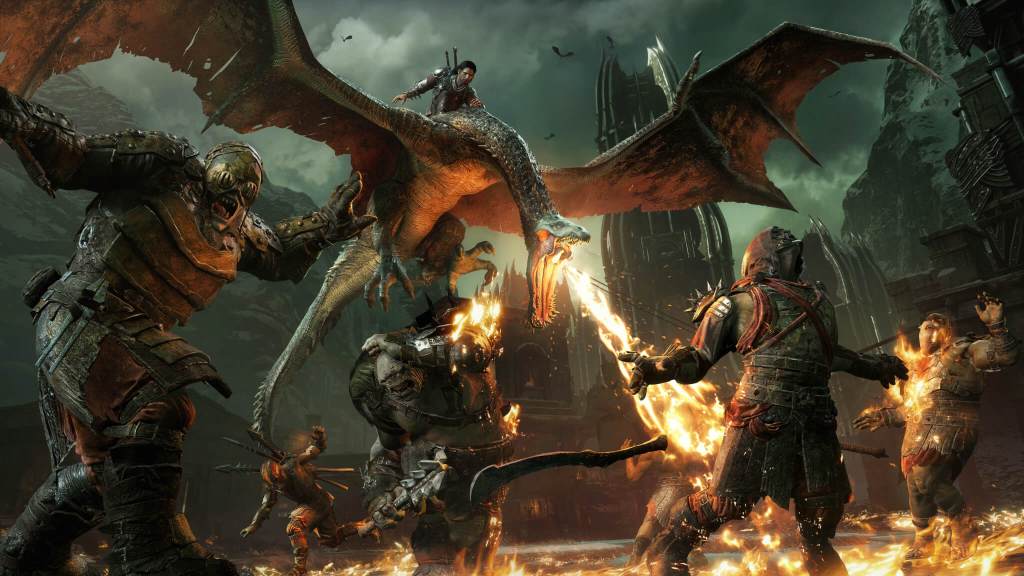 Above: Warner Bros. has turned in a pair of good Middle-earth games.

GamesBeat: When it comes to doing Gollum, the first thing I think about in adventure games and The Lord of the Rings, do you remember the old–

GamesBeat: No one’s done anything like that with The Lord of the Rings since then. You’ve made your own franchises, but you’ve never done anything that’s so visible before. Is that a little intimidating?

Fichtelmann: I don’t think so. On the one hand, this is a big chance for us, but I also see, especially when it comes to the two current productions, that there’s a lot of passion in our studio for the RTS [A Year of Rain] and for working on Gollum. I see the passion in the team. When we’ve done storytelling games in the past, we’ve normally had one strong writer, one strong game designer, lead game designer, and then 30 or 40 people who have to follow them. There’s a strong director. Especially for the RTS, team-wise, this is a dream project for people in the studio. They all normally play multiplayer games and very classic point-and-click adventure games. When it comes to Gollum, the best comparisons are the action-adventures you normally see on the consoles.

This is also something where I see that our team is more enthusiastic about these two productions compared to, maybe, some of the games in the past. That doesn’t mean they weren’t enthusiastic enough for these kinds of games, but now these two new endeavors are really cool for our people.

GamesBeat: Gollum is such a unique character when it comes to fantasy literature. There’s no one like him. But there’s also no one like Andy Serkis, who had such an amazing performance as Gollum in Peter Jackson’s films. Is that definitive performance intimidating to you? It stands up so well.

Fichtelmann: We’ll see. Obviously, Andy Serkis did a fantastic job. He’s stuck in some way with the Warner version of The Lord of the Rings. We don’t know if he may then reprise his role in whatever Amazon is doing. We’ll show, at some point in the future, how our Gollum looks. He’s quite well-described in the novels. It will be very near what Tolkien has said Gollum looks like. And then we’ll see. Some people have already asked if we’ll have Andy for the voice-over of our Gollum. We’ll see. Maybe due to the fact that our Gollum doesn’t look totally different from the Gollum we know from the film universe, but it will look a bit different—I don’t know. Maybe it will also be a little bit, for the audience, a bit different to see the same actor then reprising the role with a character that looks different. Maybe the good thing with Gollum is that our Gollum—we don’t retell the Gollum story. It’s already there. But it has so many gaps. You don’t know—there are questions that pop up in the novel. We can fill in all these existing gaps. We’ll tell why Gollum is what he is. I think that’s a big chance. We see him a little bit younger, until he first appears in the novels. We’ll see quite a new perspective on the character.

GamesBeat: Is this game going to start before The Fellowship of the Ring?

Fichtelmann: It takes place in the same timeframe, but Gollum doesn’t show up on the first page of the novel. We’ll tell his story until he first shows up. Sometimes they mention some things that happen to Gollum, but nobody knows exactly what happened. That’s our task, explaining what exactly happened there.