GamesBeat: Are you going into his torture at the hands of Sauron?

Fichtelmann: We had a meeting with Middle-Earth Enterprises on Monday where we already presented them with the game mechanics we’d like to see. One meeting before, we presented the whole story for them. But that’s something I can’t tell you today. Obviously, that’s one of the things that maybe people would like to know, what happened there, what was the relationship between Sauron and Gollum. But it’s not something I can talk about today.

Frodo: “It’s a pity Bilbo didn’t kill Gollum when he had the chance.”

Gandalf: “Pity? It’s a pity that stayed Bilbo’s hand. Many that live deserve death. Some that die deserve life. Can you give it to them, Frodo? Do not be too eager to deal out death in judgment. Even the very wise cannot see all ends. My heart tells me that Gollum has some part to play in it, for good or evil, before this is over. The pity of Bilbo may rule the fate of many.”

One important aspect of Gollum, in my opinion, is that there’s a pity and an empathy that goes into understanding that character. Is that something you’re trying to capture?

Fichtelmann: Absolutely. As I already said, the conflict of this character, of these two characters within the character talking to the player constantly—you’ll see this conflict in the mechanics. When you play Gollum, you’ll play Sméagol at the same time. You need to make some decisions, maybe some decisions that are more or less from Sméagol, and some that are from Gollum. You can decide for yourself what you’d like to see more. When you decide some things, it could be—this is reflected in the mechanics. The game forces you to convince yourself and find one of these two positions. When it comes to other iconic characters in the universe, in Middle-earth, we’ll see what happens around Gollum.

GamesBeat: When did you first read The Lord of the Rings?

Fichtelmann: Twenty years ago? I’m not that fresh with—I’m not the main author of the game. But interestingly, our main author was also in charge of Blackguards and the Dark Eye games. One of the most important things about working on The Lord of the Rings for Middle-Earth is having a Middle-Earth expert working on the game. We asked, at one of our last meetings—normally this is a hand-picked person. They have five or six people around the globe, and you work with them on writing whatever you do. Our lead author, Tilman Schanen, he’s already presented to Middle-earth about what he’s planning for Gollum. We asked in that meeting who we should work with, who should be our consultant. They said we already had him in Tilman. When it comes especially to questions about the world, I would normally say Tilman is a better person to ask, aside from me.

GamesBeat: What are your feelings on Gollum? How do you feel about the character?

Fichtelmann: As I said, from a storytelling perspective, this is an interesting thing. You have a depth of feeling for that conflict, as you already said, and the relationship between these two characters. We have a big chance to show what perspective the Gollum character has on that. Hopefully, we can go as deep as possible into that. People will different things. They can feel pity for him. They can—I’m sure that everyone hopes that in the end—our game won’t show his end. We know what his end is. But I think that the player then finally hopes, like when you see Titanic—this time, watching it for the 10th time, you still hope that he’ll survive, that love should survive. This is also something that’s key to our game, for Gollum’s fate and Gollum’s journey. It’s clear what will finally happen to him, but on the other hand, it’s really interesting to see the story that happens until what we saw in the novel and saw in the movie. 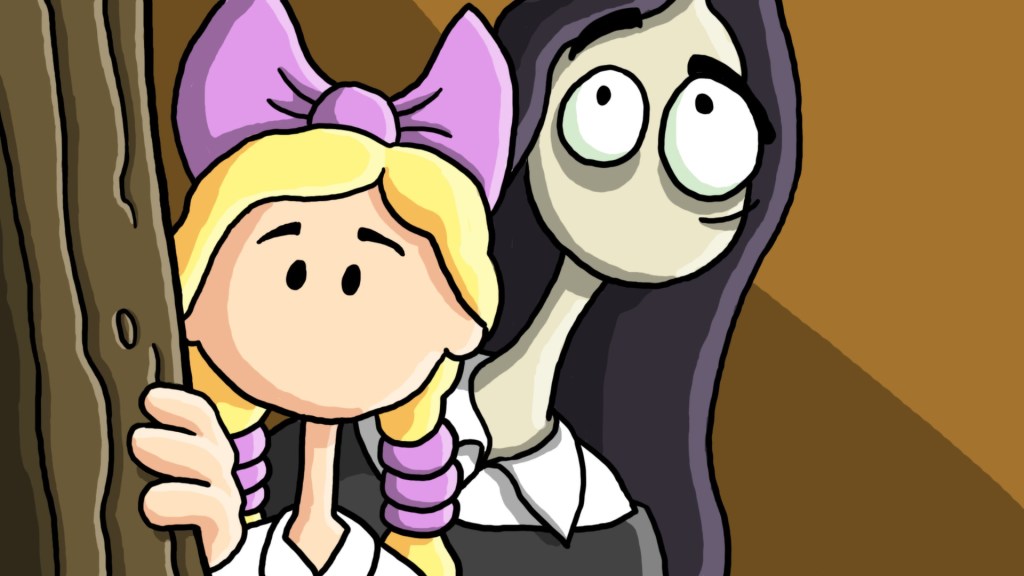 Above: Edna and Harvey is another Daedalic Entertainment adventure series.

GamesBeat: Has Daedalic ever written a character who had split personalities like this?

Fichtelmann: For the Edna and Harvey series — my cofounder Poki did both of those games. And also in Deponia, you have many characters who have split personalities. But especially Edna, she has the little toy Harvey who’s her conscience and she talks to her. Poki [Daedalic cofounder Jan “Poki” Müller-Michaelis] won’t be involved in Gollum, but as a company we have something like a writers’ room. All of the writers in our company talk about, every four weeks, what they’re doing at the moment. Ben, who’s doing Year of Rain, working on the story for the new RTS—we have one game which we’ll announce later on, which will be next year, so we have five authors. In the past we’ve had as many as eight, when we did more storytelling games, but now we have these five guys. It’s all guys. We have had women in the past. But they’re talking every four to six weeks about what they’re currently doing.

The art of the matter

GamesBeat: There’s a lot of art around the Lord of the Rings. You have cartoons, the Bakshi movies that have their striking style. You have the style of Peter Jackson. But then you also have the style of things like the Tolkien Bestiary book that came out in 1978. Will your visual style take any of those elements, or is it going to be different?

Fichtelmann: It’s too early to tell. On Monday [March 18], we had a discussion with Middle-earth Enterprises. They normally have to greenlight whatever we’re planning. They’ve greenlit everything we presented to them before Monday. On Monday we presented our philosophy for the graphical approach of the game. We’ll see what their answer is. In that meeting, I can say they liked it quite a lot. Now we have to wait for the official response, that they liked it and we can go that way. As I say, the only thing is—it’s definitely a timeless approach. We’ll have our own kind of colors and shapes. We have some—verticals are quite important, because so many things in the world are quite big. We’re looking at everything you mentioned, and fantasy illustrations in general. Peter Jackson incorporated so many The Lord of the Rings book illustrations. He made it difficult for anyone else to mine things like the book illustrations from the ’70s, so we’re looking further back to seek inspiration.

GB: Looking at the companies that have worked on The Lord of the Rings and Middle-earth, you have Warner Bros, a top company in video games. In board games you have Fantasy Flight, a leader there. Looking at Daedalic, having Middle-earth say, greenlight a game with you, what does that say about Daedalic?

Fichtelmann: What’s your view of that? [Laughs]

GamesBeat: From my view, while I’m not 100 percent familiar with your company, I do know you’re the best storytelling adventure game outfit in Europe. To me it elevates you even more, showing that you’re a leader in the game industry.

Fichtelmann: That should be our goal. When we had our conversations with Middle-earth Enterprises and they finally decided, with the Tolkien estate, that we would be a good fit when it comes to storytelling, and when it comes to—really, the company who is doing the next The Lord of the Rings games. Nothing is for sure. But I’m personally convinced that our team is capable of producing a fantastic game, hopefully something that will be a classic in 10 years.