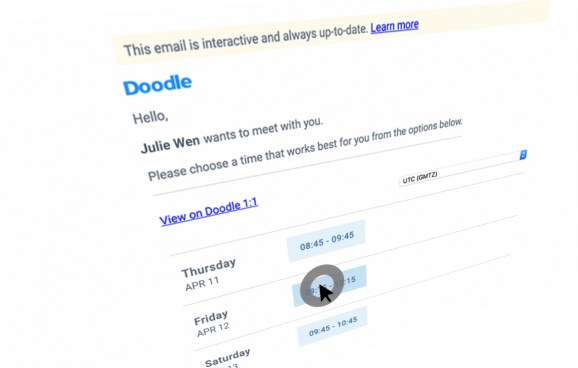 Google is officially launching its so-called AMP for Email project into general availability today, allowing companies to give their emails a more engaging and interactive web-like experience.

The internet giant first debuted AMP for Email as a developer preview last February, and as its name suggests it’s built on the same technology that underpins accelerated mobile pages (AMP). The AMP Project, first announced by Google back in 2015, is an open source framework designed to enable quick-loading and optimized mobile web pages, and it is now used by tens of millions of domains.

AMP for Email builds on that foundation by allowing developers to make a boring old static email more dynamic, with content that can be updated, products that can be purchased, questionnaires that can be completed, and appointments that can be booked — all from within the email message.

A number of notable online brands have embraced AMP for Email during the developer preview stage, including Booking.com, Oyo Rooms, and Freshworks.

AMP for Email represents a notable step in the evolution of email. Though email has improved incrementally over the past few decades, its core has remained the same: a self-contained silo for static messages that is prone to going out-of-date.

“Over the past decade, our web experiences have changed enormously — evolving from static flat content to interactive apps — yet email has largely stayed the same with static messages that eventually go out of date or are merely a springboard to accomplishing a more complex task,” noted Gmail product manager Aakash Sahney. “If you want to take action, you usually have to click on a link, open a new tab, and visit another website.”

For Google, AMP for Email also represents the latest in a long line of initiatives that encourage internet users to keep away from third-party websites and inside its walled garden. Google Search, for example, now shows all manner of information directly on the results page without having to click elsewhere, while it also lets you book activities and tickets without leaving Google. With dynamic emails, users will have even fewer reasons to visit websites directly.

“Your emails can stay up to date so you’re always seeing the freshest information, like the latest comment threads and recommended jobs,” Sahney said. “With dynamic email, you can easily take action directly from within the message itself, like RSVP to an event, fill out a questionnaire, browse a catalog, or respond to a comment.”

AMP for Email will also help with Google’s own products. By integrating with Google Docs, for example, Gmail users may see all the latest comments that have been added to a discussion thread, rather than multiple email alerts for each comment. From within this email, users can even respond and add their own comment to the thread.

Above: AMP for Email with Google Docs

It’s also worth addressing the elephant in the room here: AMP is an open source project. This means that other email providers will be able to access this new dynamic email technology, including Microsoft’s Outlook.com, Russia’s Mail.ru, and Yahoo Mail, which will eventually introduce support.

Though Google has always striven to position AMP as an open source project for anyone to use — major companies such as eBay have long adopted it to speed up their mobile websites — Google has had to fight to convince the world that AMP isn’t purely about helping Google. AMP has often been criticized for being the antitheses of an open web, given that Google hosts the AMP cache and it can glean analytics from any website that uses AMP.

And that is partly why the AMP project announced new ‘open governance’ committees a few months back, consisting of Microsoft, Twitter, among others. This governance model now also has an AMP for Email working group. “The two goals of this group are to increase email provider knowledge sharing to promote higher cross-provider compatibility of sender emails, [and] channel community feedback to senders and providers to support ongoing innovation of the spec,” according to AMP product manager Vamsee Jasti.

Dynamic emails will start showing up for Gmail users on the web from today, with support coming soon for Gmail’s mobile apps. G Suite admins will need to activate the feature within their console before dynamic emails will show up. It also perhaps goes without saying that if you access Gmail through a third-party mail app that doesn’t support AMP (although there are none at present), then you’ll be served the static version of the email.

It’s worth noting here that Google promises that it will vet all email senders before they are allowed to send dynamic emails.