Mitsoda: There’s been a big change in the last 30 years. Seattle is trying to figure out its identity. It’s a mix of the old, where originally it’s known for arts and music and the environment, and now we’re going into the tech space where everything’s being built up. How much do you change before the city kind of loses its identity? It’s something we deal with on a daily basis, to be honest. We encounter it everywhere we go in Seattle.

Mitsoda: Obviously vampires are attracted to power and politics. Seattle has a lot of power in that respect, on a global basis. It was really the perfect setting, not just speaking to the city of Seattle as a character, but also the political nuance of vampire society, the dark underground, the noir. It fit. Above: Pioneer Square is one of the many Seattle locations that Hardsuit Labs is re-creating for Bloodlines II.

GamesBeat: For people who haven’t played the Masquerade before, what makes a vampire in Vampire: The Masquerade different from other bloodsuckers in media?

Mitsoda: Vampire the Masquerade is generally about the vampires staying secret. Unlike True Blood or even Buffy, I would argue, they are not out in the open. People do not know about them. They cannot know about them. Even now, as Dale [a character from Bloodlines II] says, it’s harder than ever to be a vampire. There are camera phones everywhere. Vampires have to be especially careful. There’s that element of your identity, keeping your identity secret. No one can know about what you are. And yet you’re a social creature. You have to go out there. You have to do business. You have to seduce people. You have to drink blood. You have to walk among mortals, but they cannot know who you are. The other thing that makes the Vampire setting different is, obviously, with the first game as well, it’s a much more mature universe. It’s not just in what we show as far as gore or anything that, but it’s about mature themes. As far as the dialogue goes, we’re exploring characters that are very nuanced and different from your average RPG, where it’s about good and evil. In the world of Vampire, you’re a monster. You’re struggling against the beast inside you. You’re constantly not only struggling to keep your identity secret, but you’re struggling with the thing that you are.

GamesBeat: Thing I’ve always associated with World of Darkness vampires is that they’re social creatures. But they can’t be social in the way we can be social. That paradox, if you’ll forgive me — do you play that up in this game?

Mitsoda: Oh, yeah. A whole lot of the game is just going out in the world and getting involved with the people there. Going to the bar and socializing, making contacts, figuring out how you can play people to your benefit. That’s what you do as a vampire. You’re not just skulking in the sewers. You’re not in a dungeon or something like that. You’re in the world, around people. Mostly you’re around humans. There aren’t nearly as many vampires as there are people.

Schlütter: Also, the idea of starting out as a thin-blood is more like—you’re being thrown into this world. It’s a very sudden experience. You still have a human background. You still need to figure out how to go about in this new world that’s been opened to you, as the character you were in life. You still carry that with you. That includes social connections and social traits as well. That’s something we play with a lot.

Kipling: It also empowers the player’s own agency, too, in terms of how they want to move through the world and interact with the world in terms of being that monstrous vampire, or playing more to the human, social side of it, engaging.

GamesBeat: Dale was talking about bagged blood. I assume he gets it from blood banks or distributors. Can you do that and not actually feed on people, if you want to go that way?

Mitsoda: The thing about bag blood — yes, you can get it. But bag blood just helps you get blood. The big thing for vampires in our game is to get resonance, which comes from feeding on people. It’s getting the emotional rush from feeding on people. Bag blood is like if all your food was Cheetos. You can technically get by on that, but it’s really not what you want to eat.

Kipling: Also, Dale as a character, his entire motivation is to remain cooped up in his apartment and not be involved in anything in the World of Darkness. It’s obviously a slightly different motivation than what we want the player to engage with as they progress through the world and try to figure out their place in it.

Mitsoda: It’d be a pretty boring game if you just played like Dale.

GamesBeat: Can you make friends with humans who willingly give you their blood and feed off the emotions of altruism and friendship that way? Or is that just too lovey-dovey for this game?

Mitsoda: I will say, you’ll definitely build some relationships in the game. I can’t go into specifics right now. But I mean, you—part of your core as a vampire is to make connections, to fool people, to get close to them in a way that you can use to get blood from them. Generally, vampires can be romantic, they can be nice, but at the end of the day they’re parasitic. They need blood, and they’ll do whatever it takes.

Kipling: The question itself is somewhat insidious, because it suggests that the motivation to become friends is to be able to drink their blood, which then questions the motivation for that relationship. It’s not the case that you meet somebody, you just happen to like them and become friends, and then consequently you also might be able to get blood from them. There’s definitely a motivation in blood for the player. That drives a lot of their actions and choices. 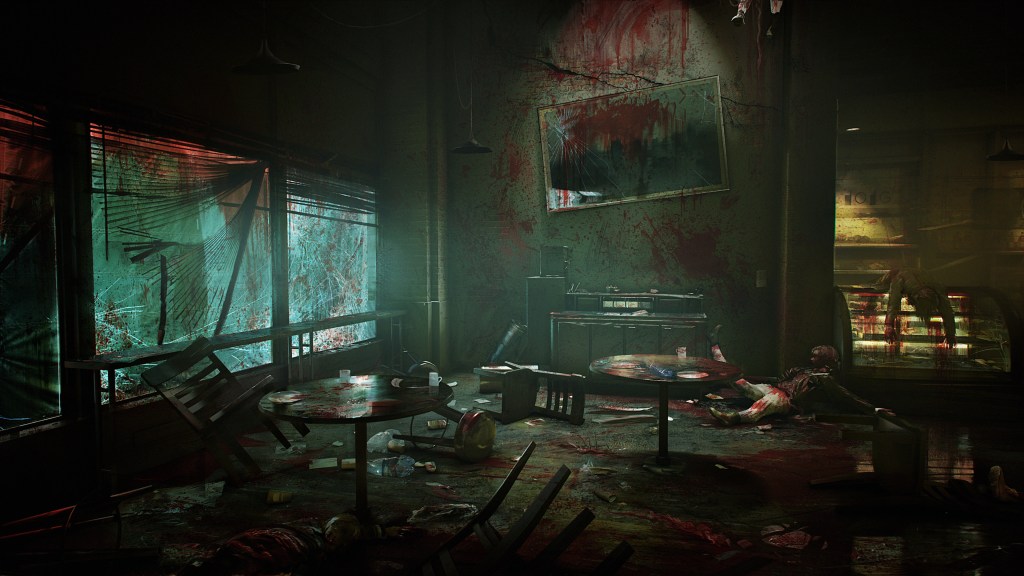 Above: Bloody bars sound like a treat for vampires.

Schlütter: We do have characters that are very close to the player who, time and again, remind him of his own humanity. Do you really want to sacrifice this part of your humanity for power? We question that a bit.

Kipling: I will say that one of the core pillars for us in development is that we do want you to be a vampire. You’re playing a vampire fantasy. We’re not setting you up to play as—we want the player to play how they want to play, but ultimately you are a vampire. It’s balancing that duality between the monster and the human.

GameBeat: What’s the hardest thing about writing a vampire character?

Mitsoda: I have some experience now, so it does come a bit naturally. [Laughs]

I will say, the difficult thing in any character is just trying to figure out their voice and who they are, what they want. As far as vampires go, the way that I approach vampires is that, ultimately, they are locked in at death. There’s this idea for them that they can change, that they can become better, that they can retain their humanity, but ultimately, their biggest weakness is that they can’t really change when they’re a vampire. They’re whoever they were when they died. That’s how I approach vampires. But there are so many places that can be taken as far as where characters go. Vampires themselves, and especially in the Masquerade—there are so many different archetypes of vampires. You have the Anne Rice seductive type of inspiration. You have the corporate vampire, the one that latches on to a business and uses money because money is power. You have vampires that are on the street getting involved in organized crime, because they can hide there. No one talks in that world anyway. It’s always just figuring out how vampires would infiltrate various parts of society, and then what is their experience like when they’re there?

GamesBeat: Did you include any other World of Darkness monsters in this?

Mitsoda: We cannot be specific about what else you might encounter right now, but I will say that it is the World of Darkness, and not just Vampire the Masquerade.

Kipling: One of the great things about the World of Darkness is how rich it is in terms of the ability to speak to today, and then weaving that darkness through it. Not just vampires.

Mitsoda: Sometimes people can be just as bad as vampires, too.

Schlütter: It’s also fair to say for us that one goal for Bloodlines II is to bring the IP back, to show people how cool this universe is, and then open up for a lot more opportunities.

Putting on a new Hardsuit

GamesBeat: How long have you been in the game industry now, Andy? Is this the first time you’ve worked on a vampire game? Any game with vampires?

GamesBeat: What do vampires mean to you? They’re definitely something Brian’s been working on, but this is new to you. What’s attractive about them?

Kipling: To be honest, the thing that captures me the most about this IP is the depth of the world in which we operate. In any game I’ve ever worked on, it’s always been a huge desire of mine to experience that world more fully. Whether that’s the most mundane military shooter that I worked on, or something like Bloodlines II, what’s happened here? What’s gone on?

I spent some time as a level designer. I love history. Taking something like your own home city of Seattle and weaving the World of Darkness through it, making you look at everything a little bit differently as you walk through the city, is super awesome. That’s probably the biggest calling to me, the ability to write a really compelling history and story and universe into which, as a gamer, you can fully immerse yourself. I’m the type of gamer that wants to explore every nook and cranny and understand this corner, why that is there, what’s going on, what the backstory is. The World of Darkness allows that, and then Brian fleshes it out with his approach to things. It’s a very deep world, and it’s a very—it interweaves so much different stuff that it’s super exciting. You can’t help but want to immerse yourself into it. That’s the biggest draw for me.

GamesBeat: In 2019, what’s the most important, most significant issue you think the game industry needs to tackle?

Kipling: There’s a lot, to be honest. I can speak to myself and my own motivations and the things I prioritize. As a studio owner, the most important thing to us is making sure we foster an environment for creatives who can ply their trades and do the things that they’re most capable of doing. That means finding the right people, empowering those individuals, and then helping the studio and those creatives to build something that’s meaningful and compelling. That’s something we’re doing here, I think, and ultimately to some extent building a level of art and expression and creative work that the people in your studio can stand behind and be proud of and take out into the world.

Mitsoda: For me, as far as the industry goes, I think the most important thing is that, with our stories and the tools we use to tell them, that we continue to develop and tell more complex and mature stories. Rather than doing the old good guy/bad guy shtick, we’re advancing the medium to a point where we’re developing content and saying things that are more reminiscent of shows you might see on HBO or AMC. The storytelling medium of games needs to advance with the time. That’s a very narrowly focused thing as far as the industry goes, but for me, that’s what I’m hoping to get from it.