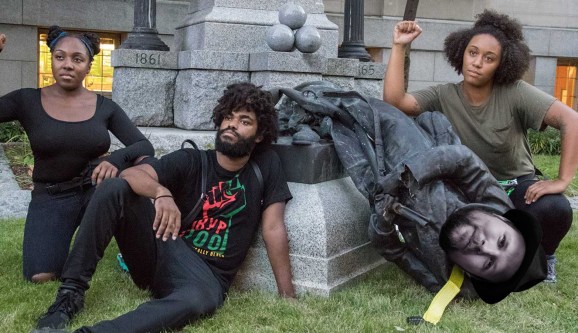 Minecraft is still one of the most popular games in the world. It has 91 million monthly active players, according to Microsoft. And now The Minecraft Team is working to ensure the game doesn’t open with any references to its old creator, Markus “Notch” Persson.

In the latest update to Minecraft, the game will no longer say “Made by Notch!” or “The Work Of Notch!” when you first boot up the game. Other messages will continue to show up randomly when you’re loading into the block-building phenomenon. But any reference to Persson is gone from that splash screen.

But this isn’t Microsoft trying to erase Notch’s contributions from the game. His name still shows up in the credits. But Microsoft no longer seems interested in celebrating him, either. While that may have more to do with establishing Microsoft as the sole owner and operator of Minecraft, it seems likely that the company does not want to associate with Notch’s edgelord shitposting behavior.

Microsoft deserves the credit for saving Minecraft from its creator

Microsoft purchased Minecraft and developer Mojang from Notch for $2.5 billion in 2014. Since then, Microsoft has worked to transition the game into a live service with cross platform capabilities and a thriving, community-supported marketplace.

Notch, meanwhile, has turned into a lonely, bizarre internet creep. Despite having billions of dollars and a Beverly Hill mansion with towering candy dispensers all along one of its walls, he spends time trying to provoke people on Twitter.

He regularly makes bigoted remarks and claims to believe in conspiracy theories like QAnon, which isn’t worth explaining. It’s likely that he doesn’t care about what he’s actually saying. He just wants to trigger snowflakes.

And that is the person that Microsoft saved Minecraft from. Notch released Minecraft 10 years ago, but it’s still most popular among young kids. When children grow interested in the game, it’s inevitable that some will want to learn who is making it.

One option is to tell children that it is like a holy text that came to us from aliens.

dad: it is indeed son

son: who made it?

dad: no one. it came from space

But Microsoft is solving this by taking ownership over Minecraft on a cultural level. Microsoft is the company that released the Xbox One Adaptive Controller to make games more accessible for disabled people. And now it’s the company that is tearing Notch out of Minecraft while continually building the game up. In the decades to come, Microsoft will get the credit for establishing Minecraft as a time-tested pop-culture icon.

And as a parent, that is such a relief.