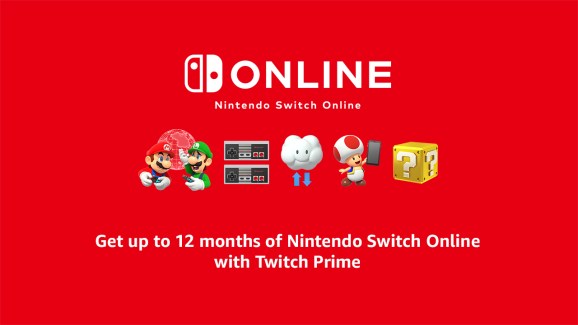 Nintendo Switch Online is one of many Twitch Prime benefits.

Nintendo is partnering with Amazon to provide some bonus extras to Twitch Prime members. If you have an Amazon Prime account connected to your Twitch, you can get up to 12 months of Nintendo Switch Online at no additional cost.

“We’ve teamed up with Nintendo to bring members up to a full year of great experiences on Nintendo Switch,”Twitch Prime vice president Ethan Evans said. “Twitch Prime members already get free PC games and in-game loot for blockbuster games, a Twitch channel subscription, and more every month, plus all the benefits of Amazon Prime.”

Nintendo Switch Online is the publisher’s newest online service. It is a requirement for playing games like Mario Kart 8 Deluxe and Splatoon 2 online. But it also gets you access to classic NES games and the battle royale puzzler Tetris 99.

The service is also already a relatively good deal. It’s only $20 per year or $3 per month. That is a third of the price of competing networks from Sony and Microsoft. Of course, PlayStation Network and Xbox Live have native implementation of voice chat, parties, and other features that Nintendo is sorely lacking.

How to get Nintendo Switch Online through Twitch Prime

To get your 12 months of Nintendo Switch Online, you’ll have to jump over a few hurdles. You’ll also need some patience and an Amazon Prime membership that will last for at least the next 60 days.

This is obviously a marketing promotion designed to get Nintendo fans connected with Twitch and Amazon. And it’s also designed to create value for anyone whose Prime expires in the next two months.

It’s important to note that this offer stacks on top of your current membership if you already purchased Nintendo Switch Online — but only if you have an individual accounts.

This does not work with family accounts. But you already have close loved ones, so what do you need bonus promotions for? Unless … unless you are sharing with non-family friends, you scoundrel!