Zynga Poker was once the dominant poker game in the social casino market, but not lately. So Zynga is introducing a new mode, dubbed Spin and Win, within its World Poker Tour Tournament Center in an effort to grab more fans.

This new mode gives players the experience of playing short tournaments and a chance to win payouts of up to 10 times their buy-in by spinning a prize wheel. It’s like combining poker with a prize wheel.

Zynga has been trying to bring its once-dominant poker game back for a while. Thanks to added competition, it lost market share in social casino games in 2018, according to market analyst Eilers & Krejcik Gaming. 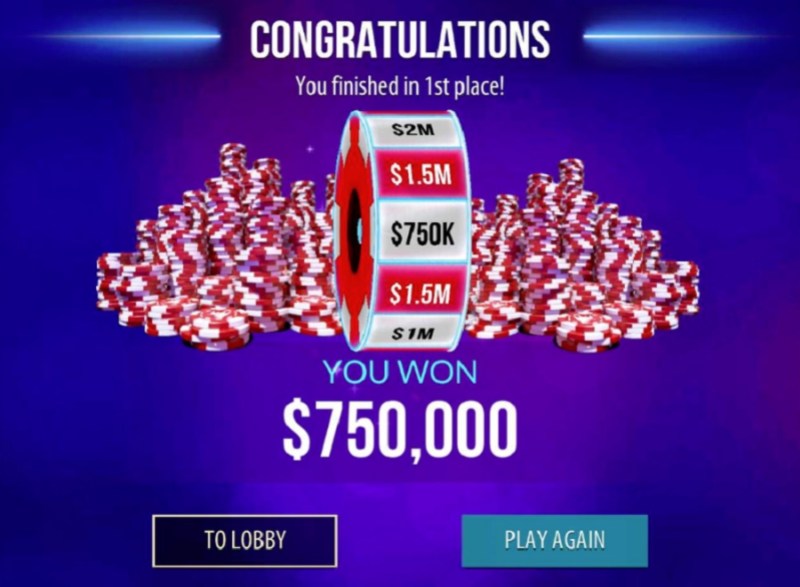 Above: Zynga Poker is introducing spin and win.

For 2018, Zynga generated $316 million in social casino games revenue, down 5.4 percent from 2017. It has a 6.1 percent market share, compared to 28.3 percent for market leader Playtika, Eilers & Krejcik Gaming said. The poker decline has been attributed to changes Facebook made with its social sharing.

Zynga listed the following features with the new mode:

“Our players have asked for faster-paced tournaments with bigger rewards, and we believe Zynga Poker’s new Spin and Win tournament mode truly puts our players in the hottest seat at the table,” said Bernard Kim, president of publishing for Zynga, in a statement. “Combining this quicker, more aggressive tournament style with the famous World Poker Tournament brand gives players the most compelling virtual experience in the sport of poker.”

Above: Zynga Poker has higher stakes now with Spin and Win.

Zynga has partnered with World Poker Tour on the game.