Google’s leadership team trusted Phil Harrison to head the search company’s foray into games. As vice president in charge of Google Stadia, Harrison has to make sure that the company has put all the right things in place to make its cloud gaming platform a success.

I’m happy to report that Harrison will be one of our speakers at GamesBeat Summit 2019, which will be held on April 23 and April 24 in Los Angeles at Two Bit Circus, the micro-amusement park with modern entertainment like virtual reality stations. After last week, Harrison is the person to talk to in the game industry, and we are delighted he will do that at our event.

Check out the agenda. Harrison is one of more than 90 speakers who will talk on the theme of “Building gaming communities” across two days. The code GBS19EXPERIENCE will unlock a 20 percent discount on your registration.

Harrison’s appointment and the authority Google’s leaders have apparently given him is a clear sign that gaming has arrived and the biggest tech companies on earth are taking it seriously. Cloud gaming has been around for more than a decade, with disappointing results that have left many gamers skeptical.

But the infrastructure of the internet is different today, and graphics processing units (GPUs) are commonplace in data centers. Cloud gaming should be a solvable problem, and Google’s Stadia is going to be the biggest test yet.

Rivals like Amazon, Electronic Arts, Microsoft, and Sony are likely to compete across games, much the way Apple is competing in movies and TV shows with the likes of Netflix, Disney, Amazon, and other Hollywood companies.

Harrison’s appearance at the Game Developers Conference in San Francisco last week was the starting gun for a new round of competition. But many questions are still open. Harrison will appear onstage with an interesting moderator, and their discussion will shed light on how this is going to be good for game creators of all kinds. And that’s why we think GamesBeat Summit 2019 will be a can’t-miss conference for the who’s who of the game industry to gather and learn. 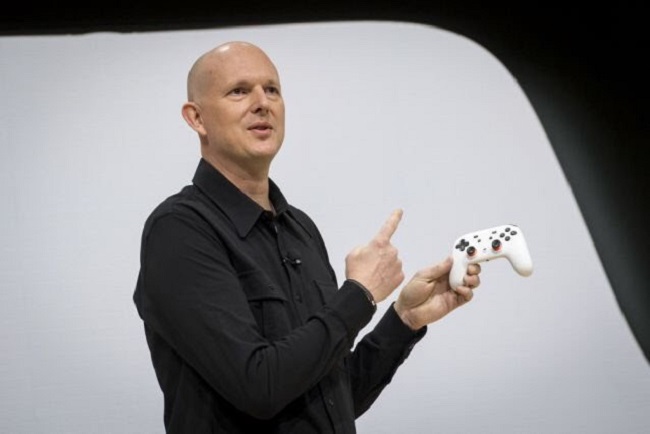 Google has a lot of skeptics. But Harrison is a dangerous man to run Google’s business — at least dangerous to the competitors — because he brings game business credibility to a big company that has never had enough gamer DNA.

Harrison joined Google in January 2018. Before that, he was serving as a tech investor and adviser at London Venture Partners and Alloy Platform Industries. He was also a key executive in Microsoft’s Xbox business from 2012 to 2015. He was a board member at Atari and before that he served in a number of executive positions at Sony’s PlayStation business over the course of 15 years. He was part of the original team that got the PlayStation off the ground in 1994.

His influence is far-reaching. Just yesterday, Geoff Keighley announced that Harrison will be a special adviser for The Game Awards, the once-a-year event that draws tens of millions of viewers in celebration of gaming.

Harrison has always been an interesting figure in games. I remember one time we rode a bus together at the old Ziff Davis Gaming Summit and we talked about the then-novelty of the Blair Witch Project. I also recall George Haber of Gigapixel chasing down Harrison, who was then at Sony, in the halls of the Fairmont Hotel in San Jose, California, to pitch Harrison on a new graphics chip. Harrison turned to me and asked if this guy was for real. (Haber was for real, and he almost got his chip in the Xbox).

One of the consequences of Harrison’s cred in gaming that goes so far back is that he has been able to hire a team of veterans, including Jade Raymond, former Ubisoft and Electronic Arts executive.

“I’ve been really happy with the team I’ve been building. More than half of my leadership team now comes from the game industry,” Harrison said in our interview last week. “We have some very seasoned talent. We have some great new passionate thinkers. It’s fun seeing the inside of Google that Sundar alluded to yesterday. There are a lot of passionate gamers who got into tech because of games. They work at Google. They’re now able to bring their talents to a game platform. It’s a win-win. It’s not just about hiring people from outside of Google. It’s also about finding those talents from inside.”