Gamers have been excited about battle royale games like Apex Legends and Fortnite. But if you pull up 10,000 feet to see what’s really happening, it’s clear we have a battle royale in the game industry itself.

I have been fond of dividing the world of the game industry into the intentional game companies — Sony, Microsoft, and Nintendo — and the accidental game companies — Amazon, Google, Apple, and Facebook. By accidental, I mean that they created platforms that were meant for something else, but eventually taken over by games. The iPhone is a perfect example of that.

The intentional game companies have been deadly serious about games for a long time, and they have decades-long credibility with their customers. The accidental game companies have created huge platforms that game developers have adopted, using them to create tons of money. These include the Google Play Store, Apple’s App Store, Facebook’s Oculus virtual reality platform, and Amazon’s various game services, Twitch streaming service, and Lumberyard game engine. (This story foretells the kind of discussions we’ll have at GamesBeat Summit 2019, our event in Los Angeles on April 23 and April 24.) 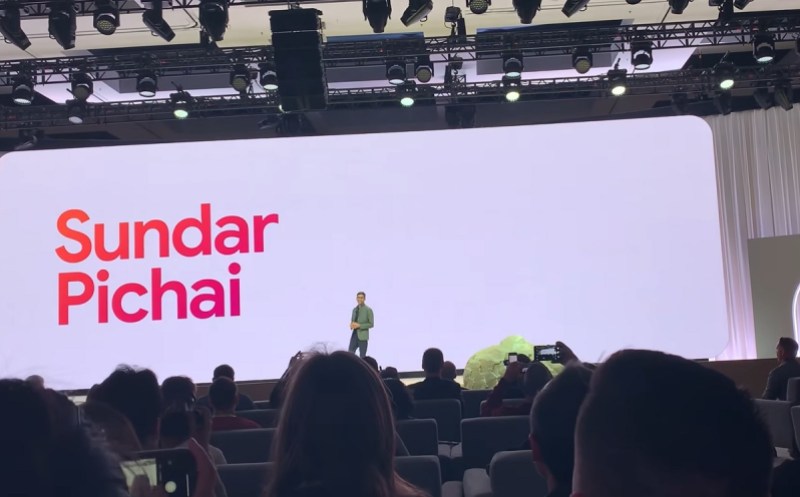 I’ve often speculated in the past — in interviews with former Sony executive and current Google Stadia chief Phil Harrison (back in 2017 at the Gamelab event in Barcelona) and Jack Tretton, the former head of Sony’s U.S. PlayStation business — that the big tech companies would eventually wake up to the gaming opportunity.

And in the past couple of weeks, we have seen that happen. On March 19, Google CEO Sundar Pichai took the stage at the Game Developers Conference to declare that games are for everyone and that it wants billions more people to become gamers. That carried gravity. And Phil Harrison brought game business cred as he announced Google’s cloud gaming platform. Jade Raymond, formerly of EA and Ubisoft, pledged she would make games for this platform and run Google’s internal game studio.

The Netflix of games 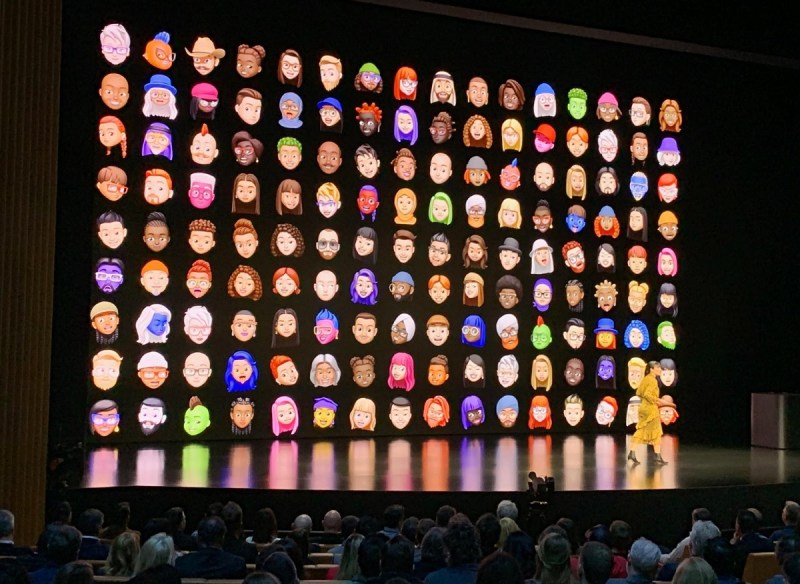 Above: An Apple Arcade appears.

These companies are all realizing that gaming pushes the intersection of creativity and technology — a street corner that Steve Jobs used to say drove Apple forward. Jobs sadly never came to accept gaming as a passion. But it is clear that Apple sees gaming as a way to push forward technologies such as the smartphone itself or to give birth to new ones like augmented reality. We can expect more from Apple to show it really does care about games.

Pichai praised gaming for “pushing computing,” a goal that all of Google cares about. He pledged that Google’s dozens of data centers would stream high-intensity games over a low-latency network in 200 countries around the world.

Amazon got religious about games earlier, and Jeff Bezos has been hiring game developers like John Smedley and telling them to make games with “ridiculous computation.” It bought Twitch for $970 million in 2014, and now Twitch’s streams reach more than 100 million gamers a month. And Facebook, not to go unmentioned, dove deep into virtual reality in 2014 with its nearly $3 billion acquisition of Oculus. Add China’s Tencent to the mix, and the global nature of the battle royale takes full shape. 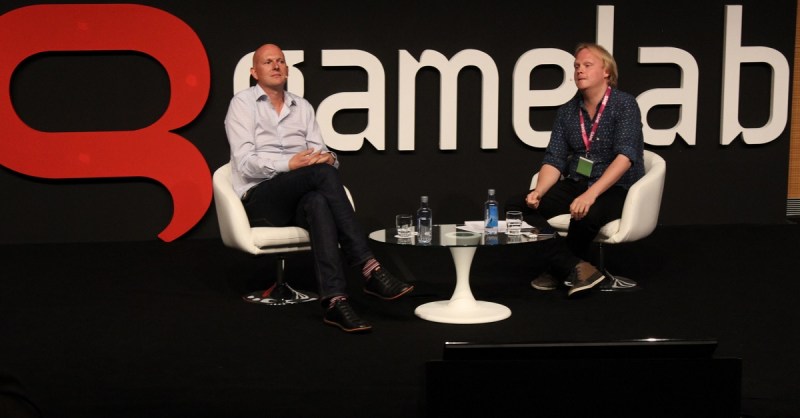 Above: Phil Harrison (left) of Alloy Platform Industries and Matt Handrahan of GamesIndustry.biz.

Back in Barcelona, in 2017, I asked Harrison — who was then a neutral venture capitalist — what he thought of the intentional and accidental game companies.

He also said, “I think Amazon knows they have a games business. It’s interesting that the games bit of Amazon reports in to the AWS leadership. That’s not a surprise or an accident. That’s very purposeful. The one unknown, unseen is what Apple is really doing in AR and VR. I don’t believe for an instant that what they showed at the worldwide developer conference is all they’re doing in AR. But they made a very strong statement of intent, and that’s exciting for the future.”

I’m pretty sure you could have substituted Google for Amazon in that conversation, but Amazon signaled its intentions earlier with the Twitch deal. 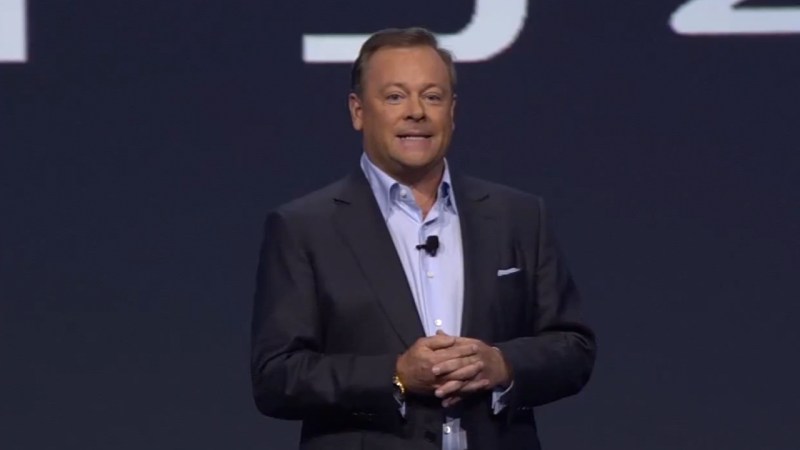 Above: Jack Tretton on the stage during Sony’s 2013 E3 media briefing.

And I also asked Jack Tretton, the former head of the Sony PlayStation business in the U.S., what he thought of the competition. That was way back in March 2017.

“I had an opportunity to have a one-on-one meeting with Jeff Bezos. He reached out to me just after I left Sony. I really enjoyed that,” Tretton said. “I’ve certainly spoken to Google and Apple as well. They’ve always had the potential to be major players, but I didn’t see the passion at the commitment at the points when I spoke to them, what I feel you really need to have.”

Tretton added, “There was no question, when I joined Sony, that they were in it to win. They were investing the resources and they had the know-how to be successful. Microsoft was always committed. They had to go through some growing pains because they do things uniquely, but I never questioned their commitment. To be successful in this industry, you have to be committed.”

And Tretton said, “There’s never been any question in my mind that Apple, Amazon, or Google, types of companies like those, could be phenomenally successful if they committed to it. But you know better than anybody that gaming culture is unique. It’s unlike any other business. If they try to run it like other parts of their business, they’re going to struggle. The keys to success at Sony and Microsoft — they’ve kind of been islands off the corporate coast. They’re not running Xbox the way they’d run Windows. That’s a lot of the reason why they’ve been so successful. It’ll be interesting to see how that culture and that commitment evolves at companies like Google. I did hear about Phil’s appointment. I certainly wish him a lot of luck.”

The war for developers 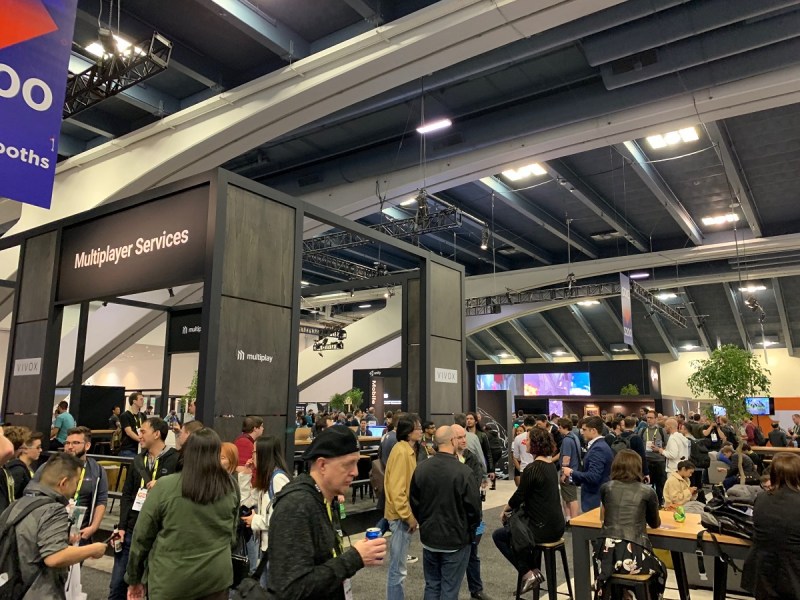 Now all of gaming is in play. Developers are being courted like crazy. Mel Kirk, vice president of publishing, said that all sorts of publishers are approaching his pinball game company to get its games on their platforms. These tech giants each have enough money to buy just about every major gaming company in the industry.

They are not necessarily going to do that. Because in gaming, the talent can walk out the door the second that an acquisition closes. Tencent, aware of that, has been buying minority stakes in a lot of game companies — like Riot Games, Epic Games, Supercell, Frontier Developments, Glu Mobile, Grinding Gear Games, Skydance Media, Activision Blizzard, and Ubisoft.

Game engine makers Unity and Epic Games are also squaring off, adding a unique dimension to the competition for games. They enable developers to publish their games on just about any platform, so the developers do not have to beg the platform makers to help them.

Yet the platform makers are making serious chess moves. If Google allows Epic’s Unreal-based games to run on any platform — PCs, consoles, tablets, and smartphones — then Unity’s ability to do that has less value for developers. And if Google can get high-end games to run on smartphones, the gamers don’t have to pay Apple anything, cutting Apple — which makes billions of dollars by taking 30 percent of game revenues — out of the financial take entirely.

Harrison said that Google would try to improve its cloud-gaming latency by making sure players could hop from the computer in the Stadia controller to the Google network, bypassing other players in the “last mile.” Could that be a 5G play? Or will it mean Google Fiber and Google’s mobile network will carry that signal? I don’t know, but if I were Comcast and Verizon, I would be a tad worried about the consequences of that strategic move.

You can bet that those who have shown their cards yet are intensely focused on the battle royale strategy.

I am certain that we will see Microsoft’s response at the Electronic Entertainment Expo (E3) in June. But privately, one exec noted to me that Microsoft’s Azure cloud business is already bigger than Google’s cloud. Indeed, Microsoft did its own test run of cloud gaming with Crackdown 3, applying the data center computing power to add more destruction to Crackdown 3’s multiplayer mode. As I told many people last week, the global chess game for gaming is afoot. And I have no idea where the pieces are and who has the queen. But it sure is fun to watch.

In my latest interview with Harrison, I could still see that Harrison was as sharp as ever. He knew the strategic importance of YouTube, which has become the platform for gaming influencers. He knew the challenges of getting a company like Google to care about games, and his answer was telling when I asked him if Google was really serious.

“Google has, rightly or wrongly, trusted me with a huge amount of autonomy to build this vision and tell this story. But I can’t do this on my own,” he said. “What I love about Google is the collaborative nature of the company and the fact that I have partnerships all across the company, from YouTube to our technical infrastructure to Google Cloud to our hardware business, who are participating and partnering with us to make Stadia real. It’s not just my team. It’s a much broader team.”

He added, “You saw, with Sundar [Pichai, CEO of Google] as part of our presentation yesterday, that we have the support and investment from the top. But we do have the autonomy when we need it.”