April Fools’ Day is upon us, and while companies like Microsoft have told their employees not to participate, Google is as always trying to outdo itself. The company releases all sorts of jokes, ranging from the ridiculously lame to the very clever, from a simple blog post or video to an elaborate gag or new feature. It’s a very Google-specific tradition — even other Alphabet companies don’t really participate in the celebration.

Google’s various divisions create more practical and impractical jokes for the holiday than any other tech firm (although the overall number seems to be decreasing), and it’s simply hard to keep track of them all. As such, we have put together our annual roundup — here are all of Google’s April Fools jokes for 2019. (If you’re curious how it compares to previous years, see our roundups for 2018, 2017, 2016, and 2015.)

The Google Maps team tends to have more intricate jokes — usually playable games — and this year it’s a spinoff of the classic Snake. You can play Snake in Google Maps in different locations across the world, including Cairo, London, San Francisco, São Paulo, Sydney, and Tokyo. To play, open the Google Maps app for Android or iOS, tap on the menu icon on the top left corner, and hit “Play Snake.” Pick a city, grab as many passengers as you can, and make sure not to hit anything. Snake on Google Maps will be live in the app for about a week, and it even has a standalone site that Google says will stay up “long after April Foolsss is over.”

Google Calendar also has a new game, this one à la Space Invaders. You can launch it by clicking on the gear icon and choosing “Play a game” — note that this option isn’t available to G Suite users. You’ll get the following warning before you start to play:

The game you’re about to play teaches you how to clear your schedule. Clear your meetings one by one with laser sharp precision.

Be careful. Don’t let any events reach the bottom or you’ll lose the game.
Move the mouse or use the arrow keys to position yourself.

Blast your meetings away to hit a high score. Your schedule becomes busier and busier as you advance to later levels.

Introducing a new way to clear your schedule https://t.co/O4rxLFonaR ↓ pic.twitter.com/WSSpfxzamB

Google Japan always has a gag or two up its sleeve, as well. This year, the team has added to the Gboard keyboard app with a new device that provides a more comfortable character input environment. The Gboard spoon bending version is all about flexibility: You input characters by bending a spoon. All you have to do is connect the Gboard spoon bending version to your smartphone or computer, bend the spoon, and the corresponding letter to that angle is entered. The less you bend, the closer you are to the beginning to the alphabet, and the more you bend, the closer you are to the end. Even more intriguing, if you bend the spoon with your mind, you’ll enter more characters. The team has released designs, schematics, firmware, and so on, so you can even use a home 3D printer to build your home.

Your Google Home can now talk to tulips (“Hey Google, talk to my tulip.”), thanks to “great advancements in artificial intelligence.” Translation between Tulipish and dozens of human languages means you can finally talk to tulips — they’ll tell you when they need water, light, or more space. Apparently, tulips are not only very chatty, they’re also great listeners and offer “sound advice.” Google Tulip was largely developed in the Netherlands, a country that produces 12.5 billion flowers a year, and tested in the world-famous flower park Keukenhof. As for the AI part, Google and the Wageningen University & Research team built on Neural Machine Translation to map tulip signals to human language. It took two years of training to add Tulipish as a language to Google Home’s recently introduced Interpreter Mode.

Screen Cleaner in the Files app

The Files by Google app for Android is no longer just an app. Instead of merely cleaning your device on the inside, the app now offers a “Screen cleaner” feature that can “wash away smudges and polish your screen.” It uses the Smudge Detector API to identify imperfections using geometric dirt models and a haptic micromovement generator to dislodge dirt, smudges, and more. In fact, once your device is clean, the feature uses internal vibrations and haptic controls to form a “long-lasting, non-stick shield” using a thin magnetic field, complete with a pineapple scent.

You’ll feel a ~wave~ of emotions about this news—you’re now covered on Fi at the bottom of the Atlantic Ocean. 🌊 pic.twitter.com/da34B5LDEh

Google Colab introduced a Power Mode that lets you “rack up combos and see sparks fly.” Power Mode causes sparks to fly out from the cursor when you are typing and shows an animated “combo counter.” This is one of the lamer gags this year.

In previous years, if you asked Google Assistant about April Fools’ on the day, it would respond with something along the lines of “We can get through April Fools’ together. Here’s one thing to remember. If something seems too good to be true today, it probably is.” This year, it just spits out historical pranks like this one: 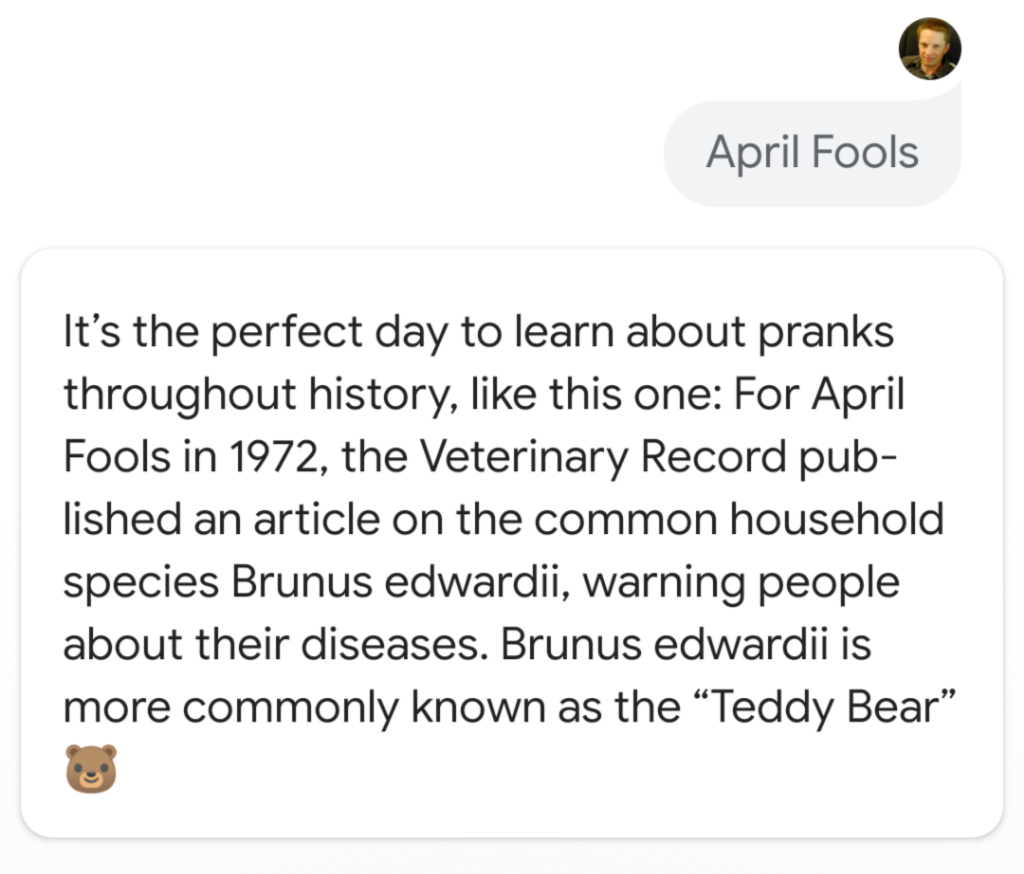 Just say “April Fools'” to Google Assistant and it will keep spitting out other examples.

The Alphabet rule is broken every once in a while by Waymo. Why do humans get to have all the self-driving car fun? Pets have places to go, too, and they don’t want to deal with the hassle of driving either. Waymo has redesigned the driving experience for pets, including a custom laser show for cats, a cooling system for hamsters, and so on.

When it comes to April Fools’ Day, Google seems to have a bottomless pit for a marketing budget. Will 2019 be the same as previous years? We will update this post as the company launches more jokes.