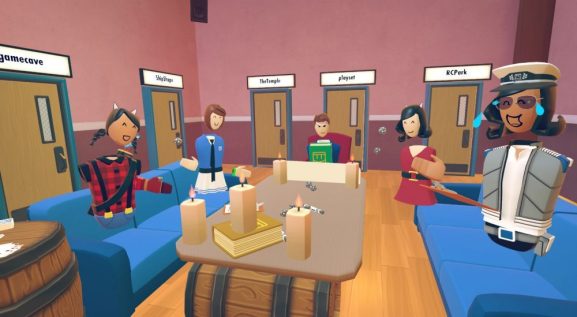 Another much-anticipated VR app is on its way to the Oculus Quest headset. Against Gravity’s social VR platform, Rec Room, will come to the device this spring.

Rec Room is a free-to-play platform that allows friends to meet up, play a variety of games and create content together as customized avatars. Players can either meet up in open hang out spaces or play sports games like dodgeball together. You can even take on more elaborate games like co-op adventure quests, paintball, and Rec Room’s take on battle royale.

We’ve long thought of Rec Room as one of VR’s most important apps. On top of playing together, players can also customize rooms to their own look and then share them with others to provide new types of experiences. In January, we reported that the game had reached over one million players.

Against Gravity also confirmed to UploadVR that the Quest version of the game will support cross-play. this is a key feature for Rec Room, allowing those with an Oculus Rift, HTC Vive, Windows VR headset and even a PSVR to meet up online. Adding Quest to that mix should help expand the player base.

Quest is due to launch this spring too, so it’s likely Rec Room will arrive alongside it. The headset costs $399 for a 64GB version but a 128GB device will arrive for $499 too.