Blood & Truth for the PlayStation VR is an “action narrative” game (this means it has a story) that is a bit like riding a virtual reality roller-coaster. Only you get to decide when to move on to the next stop. You pull your guns out, shoot everything you can at that location, and then move on the next location and repeat the shooting.

I have seen several versions of Blood & Truth over the years, as Sony’s SIE London Studio has been making the game for a long time. It was originally based on The London Heist demo on the PlayStation VR Worlds disc. You mimic the motions of holstering, pulling out your weapons, loading them, and shooting as you would do in real life. The whole idea is to be an action hero in a full-fledged game in VR.

Some of that is great, like aiming a gun at a bad guy. Some of it sucks, like figuring out how to open a door or climb a ladder. 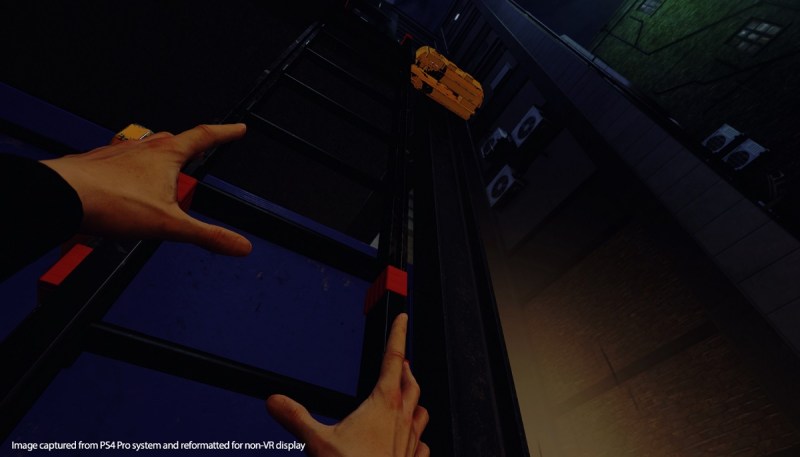 Above: Figuring out how to climb a ladder takes a little more effort than it should in Blood & Truth.

I tried previous Blood & Truth demos where I fought in a truck being chased by bad guys, and I also took on a whole gang of bad guys inside a casino. I played as Ryan Marks, who has to save his family from a ruthless criminal overlord.

In the first part of the new demo, an intelligence officer approached me while I was sitting down at a table in a warehouse. I was a captive, and he offered me a deal. I could do something for the intelligence agency and I would get a lucky break.

Then the scene shifted to a mission in a compound in a sandy desert. Bad guys were all over, and I asked if I could go into the compound to rescue a hostage. Permission was denied at first, but then an air strike hit the place. (It didn’t really blow up). 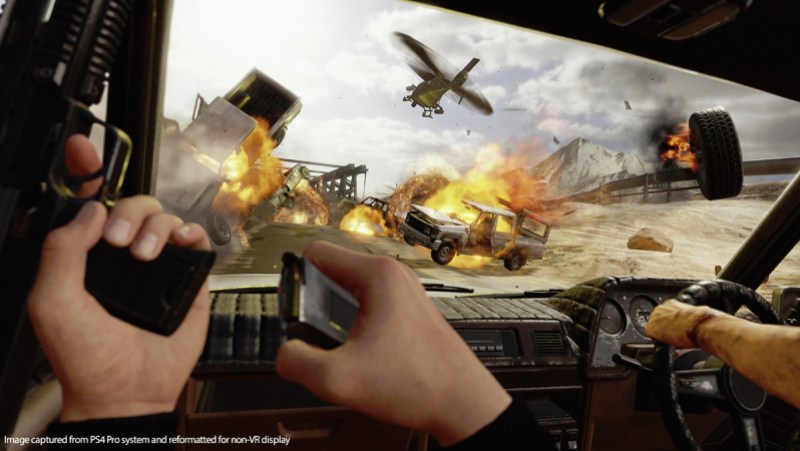 Above: Blood & Truth is the full-length game that was born from The London Heist.

Then the permission came. I moved by looking at a spot where I could maneuver and then pressing a button. When I did so, my character moved to that spot. If it was a wall, then my character would duck for cover. I could moved sideways easily using a button on the Move controller. I could easily move along cover that way or strafe while shooting.

I picked up a gun and some ammo and went into the compound. I had to physically reach my hand out and pull on doors to open them. To load my gun, I had to physically tap my chest with the Move controller to grab some ammo with my left hand and then jam the magazine into the gun that I was holding in the right hand. To holster a gun, I had to put my hand at my side or reach behind my back.

Once I got my weapons, I had to figure out how to take down enemies. I could melee them with actual physical punches, but one of the guys saw me and I had to go weapons hot very quickly.

Then a bunch of enemies came from all over. They would sneak up behind me or shoot down from the walls. When I cleared a location, I had to move to the next one, and then repeat that. 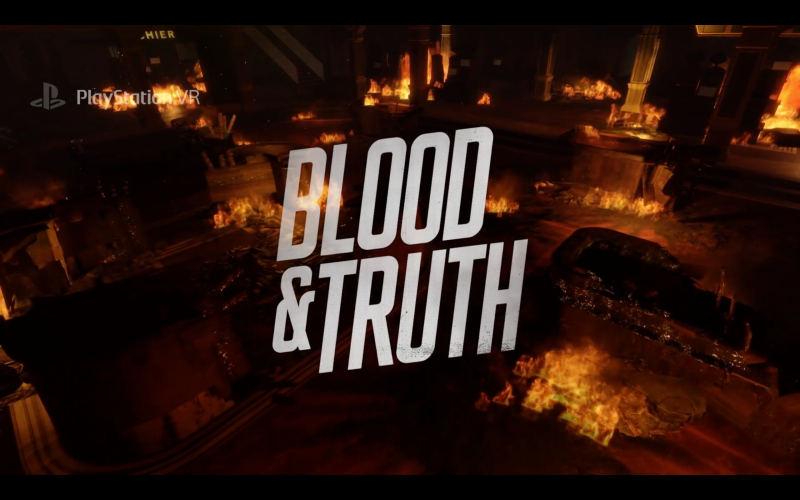 When I got to the hostage, I found it was a fellow agent. I had to put an explosive on the door, blow it open, and then rush inside and shoot the guards in slow motion. It wasn’t that hard to take the three guards out. I freed the agent and then he armed himself.

Next, we proceeded together. He moved along and then I would. We attacked in unison, shooting enemies from multiple locations. The bad guys fled and we gave chase. We got into cars and then got into a big car chase. I had to shoot the other vehicles chasing us and then get the lead vehicle. I guess you could call that car chase a “set piece,” as it reminded me of that original London Heist experience.

Much of the game takes place in modern-day London, with both “glamor and grit.”