For fans of Until Dawn, a watery grave awaits. Bandai Namco Games showed off a demo of Man of Medan, the first installment in The Dark Pictures Anthology from developer Supermassive Games.

I played the demo at PAX East, the big fan show in Boston last week. I was in the middle of a giant show floor, but that game made me feel like I was all by myself. Like Until Dawn, this game has super-realistic computer-generated characters. They move slowly and the latency is high, but it feels like you are walking around in a movie.

You are part of a crew of characters who are exploring a ship that is from the past, with waves crashing against it. I played as a character walking down the dark corridors of a derelict cargo ship. She gets spooked by a fellow shipmate and walks by a picture that seems out of place. The picture gives her a clue, and it saves her life later on. In the game play, you have to mash buttons as Quicktime-style events flash on the screen and require you to make a decision quickly.

I played the demo and then talked about it with James Scalpello, head of marketing at Supermassive Games.

The Dark Pictures – Man of Medan is slated for a summer 2019 release in the Americas for the PlayStation 4, Xbox One, and PCs via Steam. 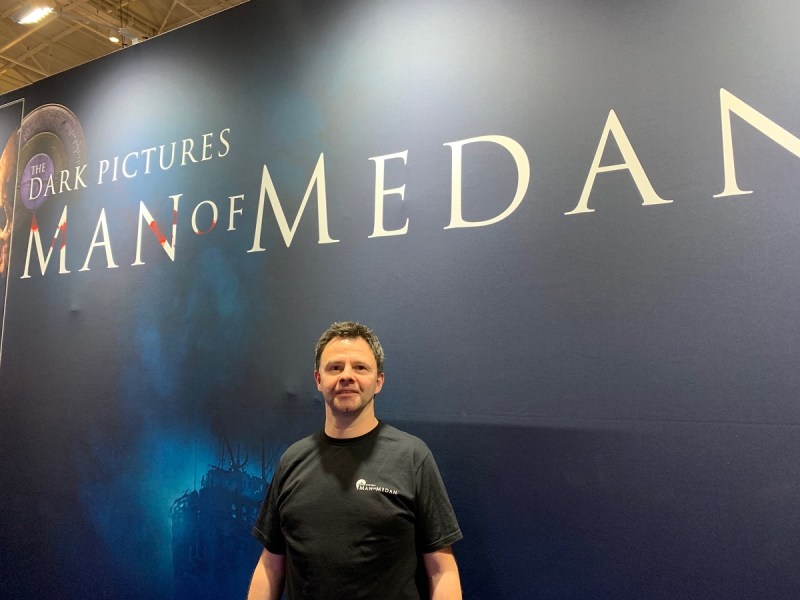 Above: heading of marketing for Supermassive Games.

Supermassive: It’s something totally separate from Until Dawn, a separate story with separate characters. It’s now an anthology, essentially a series of horror games. It’s very different. Obviously, there are influences there. Until Dawn is in our DNA. But they’re very separate games.

GamesBeat: Is Man of Medan just one story in the larger anthology?

Supermassive: They’re all separate stories. Dark Picture itself is the brand, as it were, and the games come under Dark Picture. There’s Man of Medan, and then other games will be the Dark Pictures — X, Y, and Z — of the other games after that. They’re all independent games. The stories and characters aren’t connected. As an anthology, when you have more than one game out, you can start wherever you like. You don’t have to start with game one.

GamesBeat: How are you getting everybody to look so good? Is it 3Lateral’s technology or something you’re cooking up?

GamesBeat: Was there a reason to ask the player for their approach at the beginning, rational or emotional?

Supermassive: Depending on what you choose, it affects whether Brad turns up with you at the beginning or not. Even that small demo has three different endings. We do an awful lot of branching, more branching than in any other game we’ve done before. It’s just a way of setting the scene, as to how the game starts and how it pans out within that small 20-minute window. When you were playing it, if you had got that last QTE wrong, she’d have died. You wouldn’t have gotten that end choice about saving Brad or running away. You got the water, so they disappeared, but again, if you make different choices there, there’s a different outcome.

GamesBeat: A lot of butterfly effect governing all of this, then?

Supermassive: A mechanic like that, maybe? Obviously, we wanted to change it significantly. There are lots of different things within the game, like the Dark Picture you looked at, like the secrets you picked up. There’s a whole relationship tree around how characters react with each other, depending on how that relationship branches in the game. Lots of interesting things to pick up and look at in the game.

GamesBeat: I assume all of the Dark Pictures are horror stories?

Supermassive: Yes, they’ll all be horror stories. They’re all about human emotion under unimaginable stress and terror. Generally, they’ll always have five characters. All of the playable characters can live or die depending on the choices you make. That will be the same across the Dark Pictures range. We care very deeply about the narrative, so it’s all about the stories and how the characters develop within those games, but they’ll all be separate.

GamesBeat: For the circle, is there a particular — are you supposed to know whether to hit it once, or keep tapping it?

GamesBeat: When it flashes at you, you have to mash it?

GamesBeat: That was the way Until Dawn played. Did anybody give you feedback about that, whether certain things came on too fast?

Supermassive: We get a lot of people that have played the demos. I’ve watched a lot of people play this, and some of them are bang on. They get it straight away. Some people are looking around the screen and they appear and they say, “Oh my God!” I think we have it right. 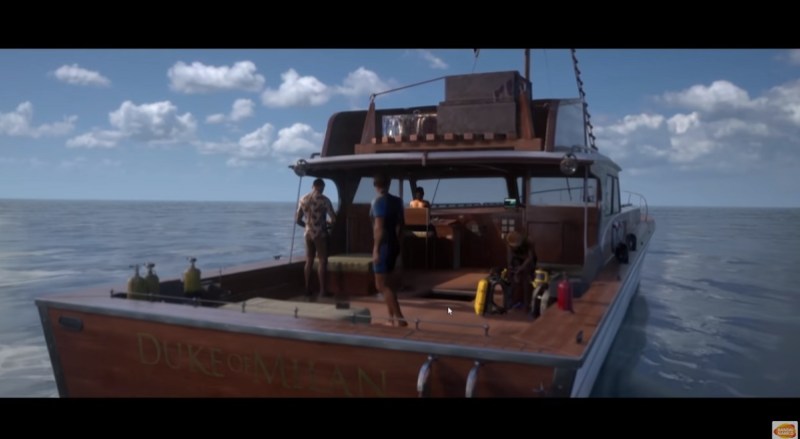 Above: Man of Medan takes place on the high sea.

GamesBeat: You are giving the player more than one chance, right?

Supermassive: Yes, that’s right. Like when you were playing it, you have about three goes to not get killed.

Above: Man of Medan, before the jump scares.

GamesBeat: The jump scares are built into all of this.

Supermassive: We don’t entirely rely on jump scares. They’re great, and they’re part of that whole horror story, but they’re not the end-all be-all. It’s about building the atmosphere through the audio, the graphics, the scenes within the game. When you’ve found a secret you’ll be able to go into the game and look at it, and obviously, that secret unlocks the story of why the ship is there, why they’re on that ghost ship. Some of it will allude to how they can get off it, maybe. It builds up that story, builds up that picture for the overall narrative of the game.

GamesBeat: But you have to explore a lot to find that.

Supermassive: Yes, exactly. There are lots of secrets to find in the game — the Dark Picture that you looked through, the premonitions you had there, there are lots of those as well. There’s a lot of content to explore and unravel in the game.

GamesBeat: I didn’t quite realize that the symbolism was literal there. The picture is what this scene is about.

Supermassive: Yeah, it’s giving you a bit of a premonition, in a sense.

GamesBeat: If you didn’t look in the picture, do bad things happen?

Supermassive: If you don’t look at it, you don’t get any information. You’re not forewarned of what’s going to happen.

GamesBeat: But you know something’s going to happen.

GamesBeat: Do you have a timeline on this?

Supermassive: Yes, this will be coming out in the summer from Bandai Namco.