Marvel’s Iron Man VR lets you fly around like Tony Stark in a near-invincible suit of armor in just about any direction that you desire. The game promises to be one of the first VR experiences that will be as big as a full video game when it comes out later this year.

I tried out the PlayStation VR game from Camoflaj at a Sony preview event recently, and it didn’t make me barf. That’s always a good sign in a virtual reality game, as it’s never guaranteed that a game won’t make me sick. And for a flying game, it’s a particularly good feat, as you can engage in free flight simply by pointing both hands downward and squeezing the triggers on the PlayStation Move controllers in your hands.

It’s a natural way to fly, closely mimicking what Robert Downey Jr. does in the Iron Man movies. That’s the way that Ryan Payton, head of Camoflaj, wanted it to feel in VR. Flying the way that Iron Man does, by pointing your hands downward and thrusting upward, is more immersive. It adds to the fantasy that VR can be a better way to transport you to another place, like making believe that you are a superhero. 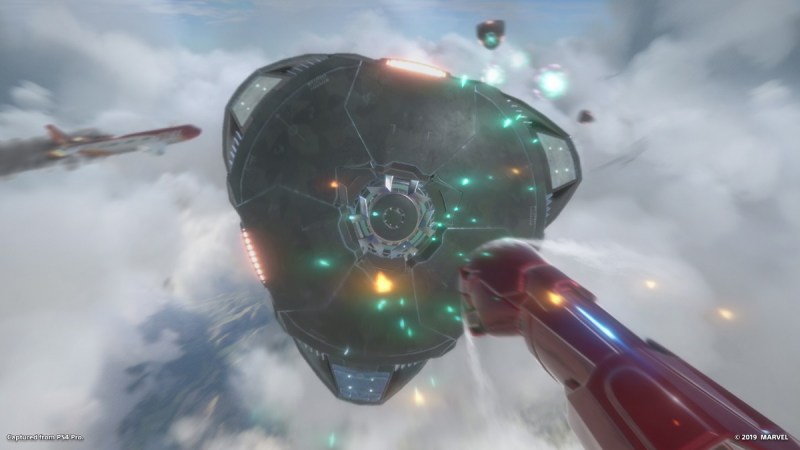 You can zoom around and turn by shifting your body or adjusting the way your thrusters are pointing. You can turn around 360 degrees and the PSVR doesn’t lose track of where you are. That’s a very good trick, as most PSVR games don’t try to do that, as the sensors depend on being able to see the Move controllers in your hands. But Camoflaj’s developers figured out your intentions, at least long enough for you to turn around and get your hands back in front of the sensors again.

It worked for me. I loved the flying. But when I tried to shoot someone with the blasters in my hands, I was squeezing the triggers, like you do in any other shooting game. But you’re supposed to push down with your thumbs on the Move button to shoot, rather than squeeze the triggers, which makes you fly. 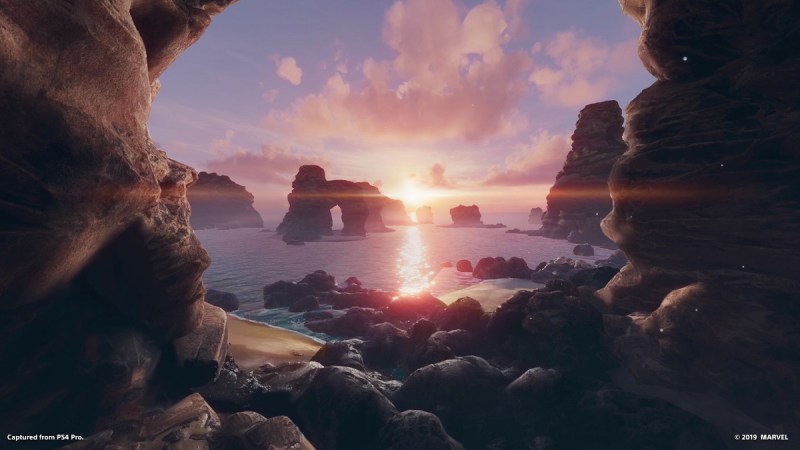 It felt like that feeling you get when you are playing with an inverted controller. You move in the opposite way that you want to move, because the controllers are weird. As I did the tutorial, and had to switch directions and shoot things under time pressure, I kept pressing the wrong buttons and triggers.

Payton told me that I would get used to it, like relearning how to do something. It could feel like the way Iron Man did things, pointing his hands to shoot with palms open, or pointing hands down to fly.

The tutorial really helped. I taught me to fly first, getting me used to pulling the triggers. I eventually got it right, shooting down a bunch of drones flying at me. I could fly with one hand and shoot with the other.

Then I got on with the mission. I was with Pepper, my executive assistant. The story fit within the Tony Stark fantasy of the Marvel Universe, but it wasn’t related to the plots of any of the Iron Man films. 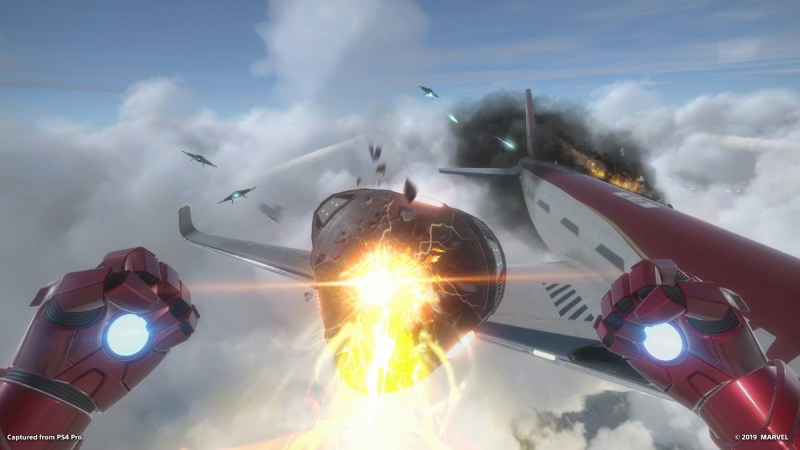 We were on a big jet, one of the Stark Industries private planes. Stark made Pepper the CEO of Stark Industries without telling her, causing her to spend a day on the phones. But then a drone appeared outside the plane, and another one came on the other side. They blew a hole in the plane. Stark jumped out of the plane and his AI assistant brought the Iron Man suit to him. It rebooted just in time to stop him from plummeting to his death, and then I got to take over.

I started flying around and taking out some drones. It was pretty easy to shoot them down. I forgot about the thumb button and trigger once in a while, but the game was fairly forgiving. I shot down the drones and had to protect the plane, which was flying remarkably stable with a big hole in it.

Eventually, I had to catch Pepper as she was climbing down the landing gear of the plane. She jumped, and I caught her. And I held her in my arms, which was kind of a nice feeling in VR. But let’s not go there. She quipped, “Next time, I get my own suit.”

Yep, it was the full Iron Man fantasy, alright. The game is coming out later this year.