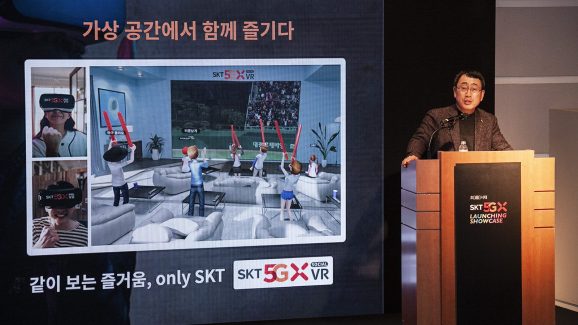 SK Telecom’s free offerings are designed to spotlight its “5GX” network’s ability to deliver higher-quality and lower-latency wireless services than were previously imaginable. To that end, the carrier said its video service, Oksusu, has added a 5GX section with three types of 5G-optimized content: VR, UHD, and 5G Max.

Through the end of June 2019, the company will let 5GX users consume Oksusu’s VR experiences and 4K UHD videos without depleting their data caps and will provide 5GB of free data for users of mobile and VR games — notably including Niantic’s Harry Potter: Wizards Unite. The 5G Max video mode will allow VR headset users to watch 4K movies, documentaries, and extreme sports on a virtual IMAX-style screen.

Oksusu is also offering 12K ultra-widescreen sports broadcasts — 3 times the width of 4K UHD — with the promise of getting live sporting events 15 seconds earlier than other services. A new 5GX social VR service is designed to let multiple people watch baseball games together in a VR environment, and SK Telecom will bring UHD-quality video and voice calling to the 13 million users of its T Phone service.

The carrier is also offering discounts and extra data to certain early adopters of its 5GX data plans, which were revealed by Yonhap earlier this week.

SK Telecom now says that customers who sign up for Prime or Platinum plans before the end of June 2019 will receive unlimited 5G data through the end of December 2019. It also noted that customers on certain contracts can receive 25% discounts on the above prices.

While SK Telecom is touting the strength of its 5G offerings, noting that it has the widest 5G network coverage in the country, superior quantum cryptographic security, and the fastest peak speeds — 2.7Gbps when using hybrid 4G-5G connections — it’s clearly concerned about the potential impact of unlimited and lower-priced 5G plans from rivals.

Following Korea Telecom’s proclamation yesterday that unlimited data will be “essential” to 5G, SK Telecom says it’s planning to revise its 5G data prices “after analyzing the data usage patterns of subscribers of unlimited plans.” That’s an unusual statement for any business to make just ahead of selling something new, but it reflects continued global debates over how to properly offer and price potentially game-changing 5G technologies.

Carriers around the world are closely watching both the pricing and performance of early U.S. and South Korean 5G data plans, as similar offerings are currently being contemplated in dozens of countries. U.S. carriers Verizon and AT&T have split on whether to offer unlimited or limited cap mobile 5G services.