For its latest game, Remedy Entertainment followed a simple mantra: “Let’s get weird.”

The Finland-based developer has always had a fascination with the supernatural, creating both the shadowy horrors in Alan Wake and the time-shifting powers in Quantum Break. Like those games, Control (out August 27 for PlayStation 4, Xbox One, and PC) is a third-person shooter set in an intriguing new world. But unlike its predecessors, Control dives head-first into the unknown, to a place where alternate dimensions and monstrous creatures threaten to invade our reality.

You play as Jessie Faden, who at the beginning unexpectedly becomes the new director of the Federal Bureau of Control, a mysterious government agency that investigates the paranormal. In the process, she inherits superpowers, such as flying and to manipulating objects with her mind. Jessie must use these to explore The Oldest House, the Bureau’s enigmatic HQ, and fight against a corrupting force called the Hiss.

Oh, and she also has a weapon that can transform into different types of guns.

“Right from the get-go, we wanted to do something that fully embraces the supernatural, strange world. … Just getting weird has been a core philosophy of this game. Let’s just get weird, let’s embrace that,” said game director Mikael Kasurinen.

During the 2019 Game Developers Conference, Kasurinen and other Remedy developers showed new gameplay footage to give the media a sense of how strange Control can be. The demo took place in the research department of The Oldest House, where Jessie runs into some of the Bureau’s cruel and unusual experiments while trying to fight off Hiss-controlled soldiers.

Combat is a mix of shooting and using your telekinetic powers, sometimes in a specific order. For example, enemies with red auras can only be hurt by using your Force Push-like melee attack or by hurling huge concrete blocks at them. But once their shield dissipates, you can use your gun to finish them off. Above: You can use your telekinesis to toss chunks of cement at enemies.

You can also launch yourself into the air and float for a short time. Since you can still access all your abilities while in this state, it’s useful to get the jump on bad guys or to attack them with Ground Slam, where Jessie rushes down with a devastating punch. You’ll unlock more powers as you play through the story, and can further improve your combat prowess with weapon and character mods that you’ll find from enemies and item boxes in the game. Mods can increase your health and stamina, reduce the time to reload, and more. They can be swapped out at any time.

Remedy’s goal was to give players as many tools as possible to customize their experience (you can even choose different outfits for Jessie to wear), and to create something that was a little more open-ended and improvisational than Alan Wake or Quantum Break.

“That’s what makes combat fun in this game: It’s about how you use the different abilities in surprising situations,” said Kasurinen.

To make sure players never feel like they’re being pulled away from the action, the studio also broke another longheld tradition: telling a story primarily through cutscenes. While you’ll still see a few of these in the game, the developers didn’t want to have too many passive moments. They want players to take the time to explore The Oldest House, which is a character in its own right. The building’s brutalist architecture makes it feel cold and oppressive, but the real mystery is what’s hidden behind its walls.

Though some of the doors lead to ordinary offices and laboratories, others transport you to completely new dimensions. You won’t be able to access all of them right away: Once you gain certain abilities, it’s worth going back to places you’ve been through before to unlock new areas. Exploring the House’s secrets is the best way to uncover Jessie’s story and the reason behind the Hiss invasion, as well as the story of the Bureau as a whole.

“We’re kind of taking a different approach to storytelling, to try and tell the story through the world as much as possible — through the different characters that you encounter, through finding documents and videos, and so on, allowing the player to piece it together by themselves,” said Kasurinen. “There are cinematics in the final game, but we want to keep them tight … and not overdo them.” 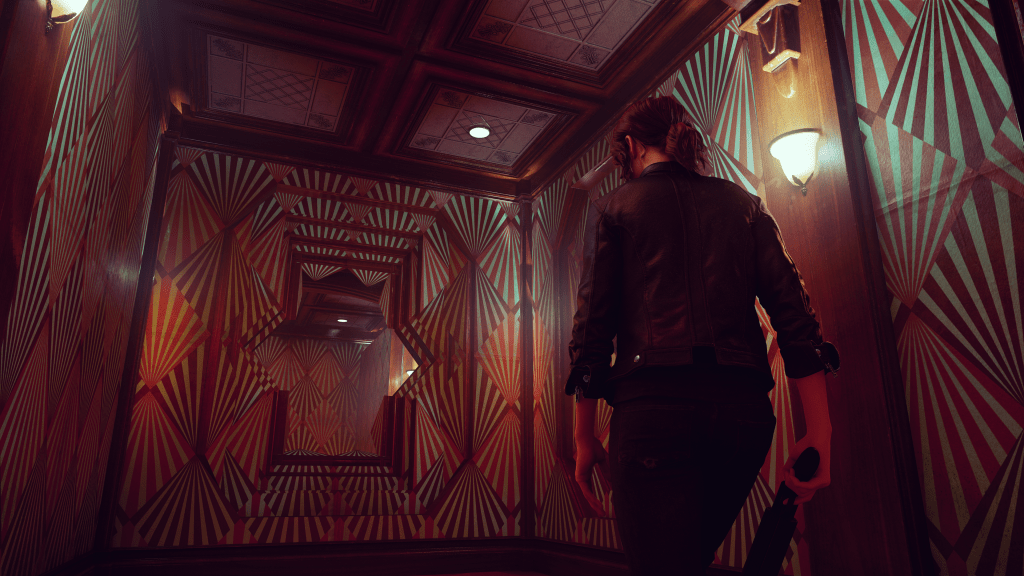 Above: The Mirror Maze is one of many secret areas in The Oldest House.

Creating a new kind of protagonist

With its focus on freeform exploration and challenging combat, Control represents a big departure from the way Remedy usually likes to make its games. And to signal that change, the studio knew that it needed to come up with a different type of hero, one that it’s never really worked with before.

“When you look at [Quantum Break’s Jack Joyce] and Alan Wake — both of these guys are kind of the everyman, thrown into a strange situation and hesitating with that burden as well. Jessie is not like that at all,” said Kasurinen. “She has always felt like an outsider in the normal world, and once she gets to this place and becomes the director, she’s actually embracing that [role].”

Like the player, Jessie doesn’t know much about the Bureau or the Hiss at the beginning of the game. But after acquiring her powers, she feels a sense of purpose and responsibility, two things that were sorely missing in her life up to that point.

“She found [her] home, in a way. Sure, there’s the initial hesitation with it. She focuses first about, ‘How do we deal with the Hiss?’ But she is a hero that is willing. She wants to help. … And she kind of enjoys it,” the game director added. “There’s something thrilling about the supernatural that she’s excited about. That’s what makes her different compared to our previous characters.”