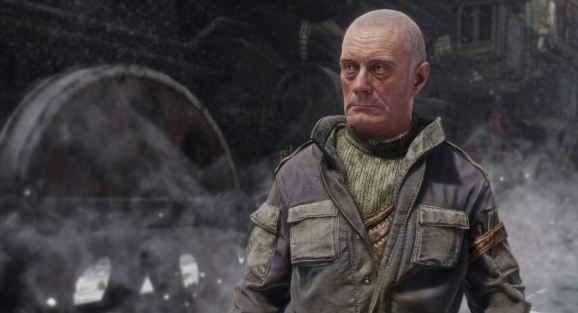 Yermak is the engineer for the Aurora, the train that's almost a character in Metro: Exodus.

Metro: Exodus surprised me. The charm wasn’t in the mix of scripted levels and open-world areas that encountered (though I did appreciate this). It wasn’t in the making of one group of bad guys a luddite cult worshiping a giant mutant catfish (though that’s great, too). Or creating one of the first levels in a video game to truly scares me — the creepy-crawly darkness of the communications bunker.

What I found surprising was, in my opinion, the touching humanity of one of your companions — Yermak. He’s the train engineer working for Hanza (a faction living in Moscow’s Metro with you), and when you first meet him, the curmudgeonly Russian finds himself working for some bad dudes — and takes a risk to help you.

Unlike many of the other characters in Metro — burly warriors, slick scouts, and insane villains — Yermak comes off as a regular person. Yes, he drives a train, but you don’t get the feeling that there’s anything special about him. He’s just Yermak, doing the best he can in a trying situation.

And that’s what I like about him: He comes off as one of the most human characters in this postapocalyptic Russia, and a Russian through and through. I had a short email interview with Metro Exodus writer Andrey Paskhalov about Yermak, the average man with the above-average humanity. He answered through a translator, and here is an edited transcript of our interview.

Above: Pardon me, mal’chik, but is this the Rusty Moscow Choo-Choo?

GamesBeat: How did Yermak come about?

Andrey Paskhalov: The reason for Yermak’s inclusion is simple – driving a steam locomotive is an unexpectedly complex task, especially if that locomotive is not in an optimal condition, so we needed an engineer with lots of experience to handle the task. Having one among the Spartans would be unrealistic, as there’s no way to use such a locomotive in the Metro tunnels, so it had to be someone in Hanza’s employ.

From the Spartans’ point of view, trusting a dyed-in-the-wool Hanza conspiracy supporter would be unwise, so he had to be someone pressed into cooperation. Thus, the general outline of Yermak’s character was defined.

GamesBeat: Yermak feels like a normal person — nothing special about him. Nothing heroic. Nothing extraordinary. But I’m touched by how he risks everything to help you escape the Metro.

Paskhalov: Yermak was first tricked into cooperating with Hanza by the promise of expert treatment for his daughter’s TB. Initially, he had no idea what his job would entitle, and he had always dreamt of driving real trains instead of Metro ones, as he tells Anna in a dialogue. So the prospect of going outside of the tunnels to drive actual steam locomotives and having his daughter cured as payment was an amazing prospect for him. He quickly found out though that, besides doing mundane and rather benevolent tasks of ferrying road repair crews and supplies through the surface, he also had to take execution teams and their would-be victims to murder sites. Terrified by this discovery, Yermak wanted out, but he’d been reminded of his daughter’s situation, and had no choice but stay.

His daughter eventually died, but his will had already been broken by that time, so he just continued doing his job mechanically until one day he saw Anna brought in for interrogation. Anna reminded Yermak of his late daughter and re-ignited his will to somehow right the wrongs he had been an accomplice to, however unwillingly. He tried to raise the issue with the soldiers, and was beaten up and thrown in a storage room to “cool his head off”, where Artyom encounters him in the game. Yermak immediately understands who Artyom is, since he heard Anna shouting about the execution, and as he’s an old man with nothing to lose anymore he feels compelled to help them escape Moscow.

Thus, Yermak is indeed a normal man driven to desperation and beyond, and thus made do something he would have never risked doing otherwise (he never even got to drive a “real” train before the war, as his wife was against the idea of him trading his stable employment as a metro train driver for a dream).

Paskhalov: He isn’t based on anyone in particular, but rather on a collective image of nice, but otherwise unremarkable and quiet people who, despite the circumstances they might be in, still have the capacity for acts of selfless bravery. It is a quite well-established archetype in Russian culture for a reason.