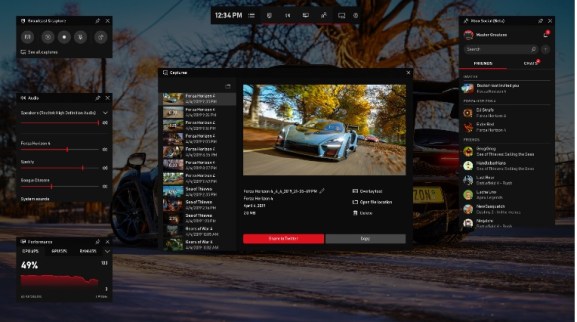 Microsoft’s Game Bar is an interface on the PC that creates an easy way to access game services with Windows 10, and today Microsoft is adding Spotify, chat, and other features to it.

The Game Bar is an overlay built into Windows that works over any PC game and can be brought up quickly by pressing the Windows key and the letter “G” on the keyboard. I frequently use it to record video.

The new features were inspired by fan feedback. You can now control your music through Spotify, create memes, chat with friends to share in-game moments, and customize the user interface to your preferred layout.

Insiders in the Windows Gaming flight ring can access these new features this week by pressing “Win+G” to bring up the Game bar when playing any PC game.

Spotify will now have a widget in the Game bar, making it easy to do functions like play/pause/skip, change current playback device, and select playlists recommended for you by Spotify. You’ll need the Spotify app for Windows installed to take advantage of this new feature. 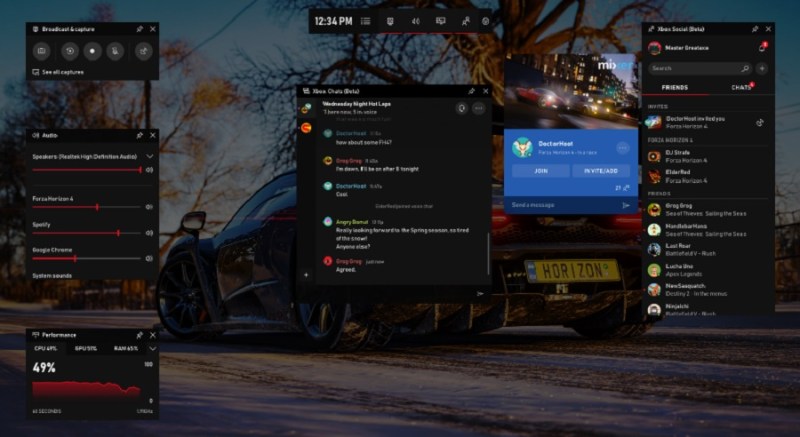 Back in December, Microsoft promised to make it dead-simple to “screenshot or it didn’t happen.” Currently, you can easily capture and view your gameplay screenshots, then share directly to Twitter, without leaving your game.

With today’s update, you can take this a step further by turning your captured screenshots into memes. During your game, hit Win+G to call up Game bar, open the Capture widget in the Game bar menu, and take a screenshot or video.

Once captured you can edit your video and add overlay text to your screenshot in the Game bar gallery. When you have your meme ready, share it with the world right away via Twitter.

In the new Xbox Social widget, you can now see what your friends are playing, and you can quickly text them, voice chat them, or watch their Mixer stream all from within the Game bar. The same friends list and communication features work on Xbox One as well as within the Xbox App on iOS, Android and of course Windows 10.

You can press Win+G at any time to bring up Game Bar, send a quick message, and get back into the action without taking your eyes off the game.

You can now customize Game Bar to make the overlay your own. Choose which widgets to show/hide, where you want them located, and even pin specific widgets.

To access the Game Bar beta, you can launch the Xbox Insider Hub on your Windows 10 PC – if you don’t have it, get it from the Windows 10 store.

You can then select Insider Content in the upper left. Select Windows Gaming. If you are on Window 10 build# 17763 or higher, you will be automatically enrolled into the Game bar flight. Then press Win+G in any game to bring up Game bar.