Google Stadia’s technology is probably going to work. I haven’t used it, but for whatever it’s worth, I thought that OnLive was good enough. And I’m sure that Google’s game-streaming service will work better than that now-defunct equivalent. But that doesn’t mean that Google Stadia is going to work.

The company debuted its gaming platform at the Game Developers Conference in March. And it answered a lot of questions about how it will work. It also avoided a number of other answers, like its business model. The reasons we don’t know how much it’s going to cost is probably because Google hasn’t even decided that yet. Its GDC presentation was all about getting game makers on board, and it’s probably going to have to still negotiate deals to actually make that happen.

But let’s ignore the business model. And let’s assume everything about Stadia works flawlessly right up until a person’s home or mobile 5G network. Stadia still has a number of obstacles in the last mile that are going to prevent it from sweeping in and changing everything.

The last mile is still a problem

The proverbial “last mile” is a major logistical challenge for delivering just about anything to people’s homes. The idea is that getting a package of diapers or a packet of data from one major distribution center to another is relatively fast and inexpensive. The bulk of the cost and lag comes from getting something from one of those local centers to people’s homes.

Even with cable internet, the last mile is going to cause a lot of problems. I’m not too worried about data caps. People already download huge 50GB games and stream 4K UHD movies from Netflix.

The real issue is that we’re all using different equipment and services. You might have DSL with a modem and a Wi-Fi router. Someone else may use their ISP-provided gateway with cable. You might only have a 2.4GHz option on your router, or maybe you have 2.4/5GHz. Stadia will work better on 5GHz, but that signal has a shorter range as well.

Then you have to worry about the quality of the cabling in your apartment building or throughout your neighborhood. Every time a Stadia signal jumps to a new point of connection after a Google node, it’s going to introduce more and more latency. And Google has no good way of solving that — especially since it abandoned plans to expand its Google Fiber project to deliver high-speed internet to people’s homes.

Maybe the next-gen 5G mobile network is the answer, but that’s going to take years to cover a majority of people. The issue is that 5G’s high-frequency radio signal degrades quickly when it hits a wall or other structures. Engineers will eventually solve this, but I doubt I’m going to get it any time soon out in my suburbs.

The last mile of convenience

The last mile concept applies to more than just the network, though. Google could perfectly deliver content to you, but then what? You need to pick up a mouse or controller and start playing. But that sounds a lot simpler than it really is.

One of Google’s ideas is that you could see a game trailer, and then click a button to start playing it within 5 seconds. But this assumes a lot about the people watching game trailers.

Do you have a game controller plugged into your device? Are you on a laptop with just a keyboard and a trackpad? Did you already go out and buy the Google Stadia controller?

Reducing loading times to 5 seconds is great, but it’s something that will only matter once you have bought in. Even if you already own a controller or a decent mouse, the barrier is still higher than you might think. Sure, you can click play on that Stadia button on YouTube, but then you’ll have to go find your mouse in a drawer. It’s a lot less work to just click onto the next cat video instead.

Mobile Stadia seems the most far-fetched

Playing Stadia on a smartphone is where the whole concept really falls apart. Touchscreen virtual gamepads are OK for slow-paced action like Minecraft, but I wouldn’t use them for anything else. Games like PUBG Mobile and Fortnite are popular on mobile, but a lot of people went out and bought consoles specifically for Fortnite in 2018. And Google hasn’t confirmed that it will support virtual onscreen controls.

That’s going to put people into the hands of the third-party peripheral market, which is a bleak scene. Now, back in 2017, I wrote that I loved streaming games to my smartphone from my own local PC. 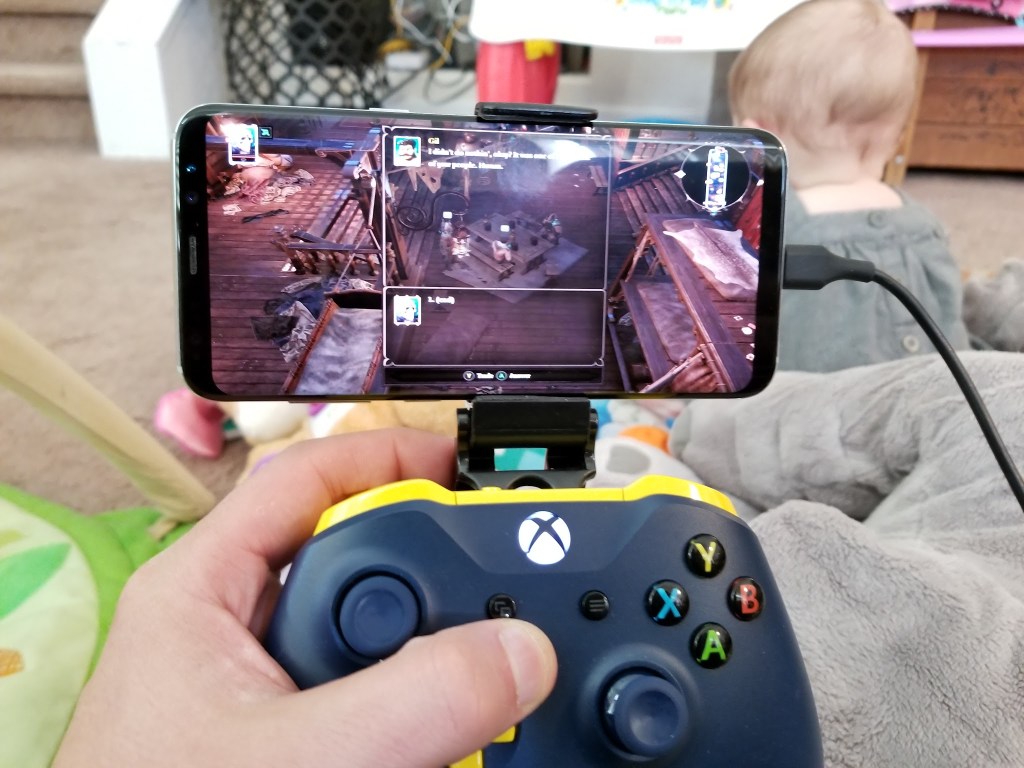 Above: I got a Nentindo Swatch.

But since then, I’ve turned on this whole concept. Clipping a controller and a phone together with a piece of plastic is cumbersome and uncomfortable. Even when I try to do this in my home, I hate it. This contraption has a top-heavy center of gravity that is actually quite straining. Of course, it only feels that way when the clip stays in place. Thankfully, your phone, gamepad, or both will dislodge often enough that you won’t actually have to deal with that weight.

I’m sure that better solutions exist outside of these strange plastic clips, but I doubt any of them work well enough for you to feel confident using them on a train or even at work.

Stadia will work in the same situations that consoles work

I’m skeptical of a lot of Stadia’s claims, but I do think it will work in certain situations. If you buy the Stadia Controller to play on your TV, it’s probably going to operate as expected.

I doubt that Google’s first-party studios will ever release a major blockbuster game. I also don’t think that playing even in 1080p on a large TV is going to look great due to compression noise, so forget about 4K. But a Stadia Controller and a Chromecast will probably always undercut an Xbox or PlayStation console in terms of price. And if this turns into the primary way that you play games, you’ll really appreciate never having to update anything and those hyper-fast loading times.

It’s outside of the living room and TV that I see a lot more issues for Stadia. You can play on a laptop, but not on a plane or anywhere you don’t have a decent network. You also need to have a wired controller — likely because Bluetooth would add too much input lag on top of Stadia’s latency.

It all seems like more hassle than it is worth. And I think that even when you factor the upfront cost, most people would end up more satisfied with a Switch than trying to get Stadia to work on some random device.