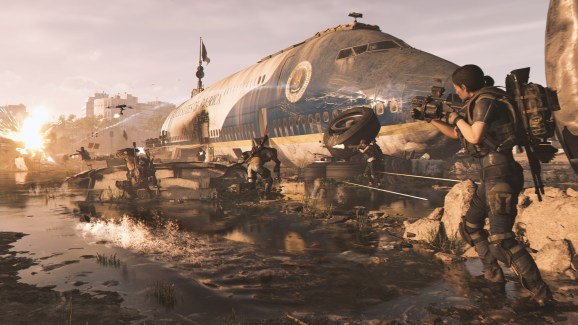 Xbox held its lead in March with 35.8% of the total gaming-industry spend on national TV advertising. Meanwhile, Nintendo and chart newcomer Respawn Entertainment were neck-and-neck with 25.7% and 23.6%, respectively. GamesBeat has partnered with iSpot.tv, the TV ad measurement and attribution company, to bring you a monthly report on how gaming brands are spending. The results below are for the top five gaming-industry brands in March, ranked by estimated national TV ad spend. Overall industry spend on TV commercials fell in March, down to an estimated $36.6 million from February’s $41.6 million. In total, 19 brands aired 58 spots over 10,400 times, generating over 2.3 billion TV ad impressions. Xbox’s estimated spend of $13.1 million puts it squarely in first place. The brand ran 12 spots over 3,100 times, resulting in 891.9 million impressions. “Last Address,” an ad for Tom Clancy’s The Division 2, had the biggest budget (estimated at $5.5 million). Xbox spent the most across networks such as ESPN, Comedy Central, and Adult Swim, while top programming included the NBA, college basketball, and South Park. Nintendo takes second place with an estimated spend of $9.4 million for 16 commercials that ran over 3,100 times, generating 494.8 million impressions. The spot with the most spend (est. $2.5 million) was “Yoshi’s Crafted World: Flip Into a New Adventure,” a new game for the Switch. Nick, Discovery Channel, and Teen Nick were three of the networks that Nintendo spent heavily on, while Gold Rush, The Loud House, and SpongeBob SquarePants were three shows the brand prioritized. Third place goes to a new player in our ranking, Respawn Entertainment, with an estimated outlay of about $8.6 million for a single spot, “Over 50 Million Players,” that aired 90 times and resulted in nearly 201 million impressions. The bulk of the outlay was focused on the 2019 NCAA basketball tournament, followed by The Walking Dead and Saturday Night Live. Networks with high spend included CBS, TBS, and TNT. At No. 4: PlayStation, which also aired just one ad. “Red Dead Redemption 2: Accolades” had an estimated budget of $1.4 million for 119 airings that generated 92.2 million impressions. NBC, Comedy Central, and TNT were among the networks attracting big budgets, while top programming included This Is Us, the NBA, and South Park. InnoGames closes out our ranking with an estimated budget of $1.2 million for three commercials that aired 644 times and resulted in 131 million impressions. The bulk of spend (over $1.1 million) was put toward “Forge of Empires: Develop Your City.” Three of the programs with the most spend were The Simpsons, Justice With Judge Jeanine, and The Greg Gutfeld Show, while top networks included Fox News, FX, and History Channel. For more about iSpot’s attention and conversion analytics, visit iSpot.tv.