Promethean AI uses artificial intelligence to help human artists create art for video games. It can, for instance, automatically generate a bedroom when a human artist says, “Make a bedroom.” Then the artist can take that scene and customize it as needed.

I saw this in action as Andrew Maximov, founder of Promethean AI and former technical art director at Naughty Dog, showed it to me in a demo at the recent Game Developers Conference.

“We’re an AI company that helps people build virtual worlds for video games or movies,” Maximov said in an interview with GamesBeat. “We’ve got an integration with Unreal” that allows human artists to take assets that were created by others and reuse them in an AI-generated 3D space.

Maximov showed it to me, saying, “Build a bedroom.” The tool created a 3D scene that showed a typical bedroom. He added, “Add a desk,” and the program automatically did so. It also added the appropriate shadows, reflections, and other details that made the desk fit in the room in a physically accurate way. Promethean AI did this in three seconds.

As this example suggests, Promethean AI is semantically aware. You click a button and it starts listening. You tell it to build a nerdy teen’s bedroom. You don’t have to tell it what a bedroom is. It already knows. You can then go into that bedroom and move objects around. Rather than issue programming commands, you simply grab objects with a mouse and move them to where you want them.

“If you say, ‘Remove the desk,’ it disappears and so do all of the other details like the shadows,” Maximov said.

If you say, “Add a typewriter,” then Promethean will add a desk to put the typewriter on, since that makes sense in the context of the command.

When necessary, Promethean will recalculate the scene, aligning a dresser against the wall and putting the shadows in the correct position. You can change the perspective and the whole scene moves with your viewpoint. You can add new objects to the scene like a newspaper, and the software simply layers on top of other objects. In 10 minutes, you can have a bedroom that looks like a scene from Ferris Bueller’s Day Off. 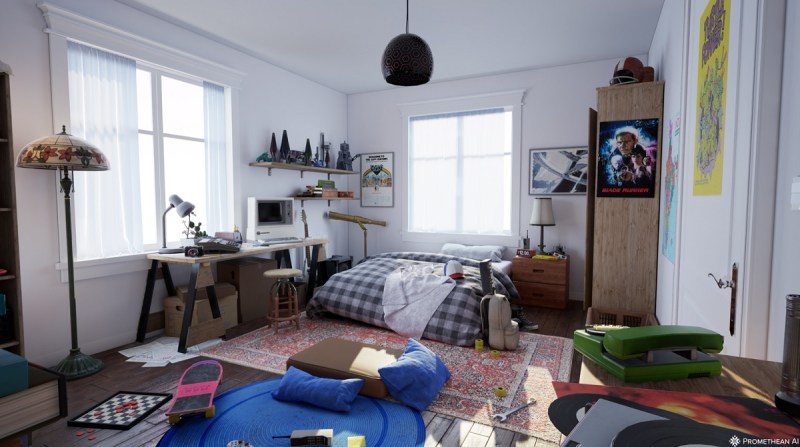 Above: The AI chose and placed the objects in this room.

Maximov worked with hundreds of artists on games in the Uncharted series, where the amount of work could be overwhelming. He started his Los Angeles company to help artists build out their virtual worlds.

Publishers will like this tool because it can cut the costs of making a Triple-A game, which have gone from $40 million to $100 million and could easily go to $200 million in the future. Such games could require 7 million or more copies sold to make a profit.

But human game artists aren’t necessarily going to be put out of work by this tool. A single artist could become far more productive while dedicating less time to the boring stuff and more time to the unique nuances that can set their work apart. 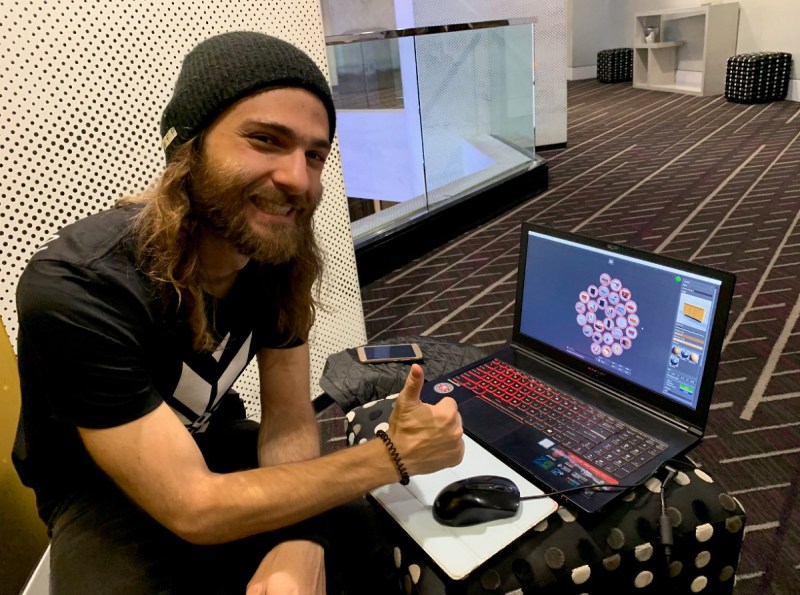 Above: Andrew Maximov is CEO of Promethean AI.

Promethean AI’s applications programming interface (API) is a tool set powered by patent-pending technology. It helps artists solve the problem of filling out vast spaces without being to formulaic or repetitive. It essentially visualizes the presentation of data.

“We are not building technology that will replace artists,” Maximov said. “We are power amplification tool. Everything we do assumes there will be an artist on top. We take you 80% or 90% of the way. Then you have the creative freedom to dedicate the time where you want to.”

It has a parallel with the movies. A scene artist could create an entire scene from scratch on a sound stage. Or they could travel to a location and get that scene in the real world. They could then modify the lighting and dress up other details. The interesting thing is that finding a mouse in the real world and capturing its image is pretty cheap, but creating the same thing in a virtual world is pretty expensive.

“We’re actively optimizing the process,” he said. “We take high-level creative intent and convert it into actionable 3D content.” 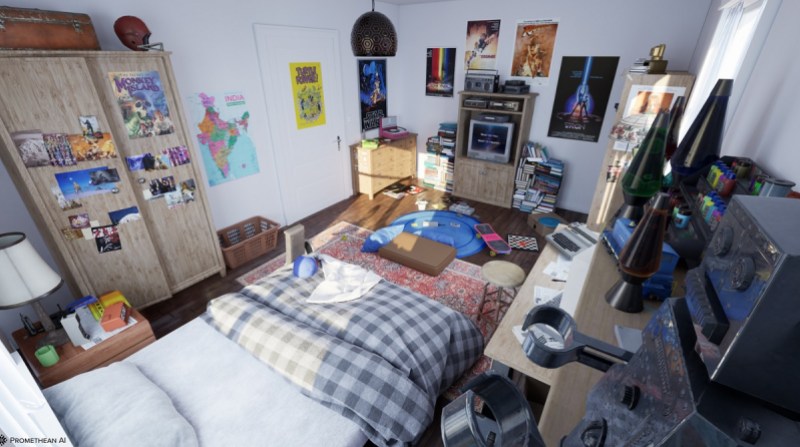 Above: Promethean AI created this when asked to create a “nerdy, messy, ’80s, teenager’s bedroom.”

For indie game companies, this could be a boon. They could create a game that is set in a castle and make that castle look realistic using Promethean AI.

The Promethean AI solution can be trained by artists to imitate an artist’s style. It trains and learns through machine learning techniques. It evaluates a space and makes suggestions. And it supports new graphics technologies, like real-time ray tracing.

And it’s not a black box that does only what it is trained to do. Artists can train Promethean AI to build their idea of what a bedroom or any other virtual space should look like. In other words, Promethean AI learns. 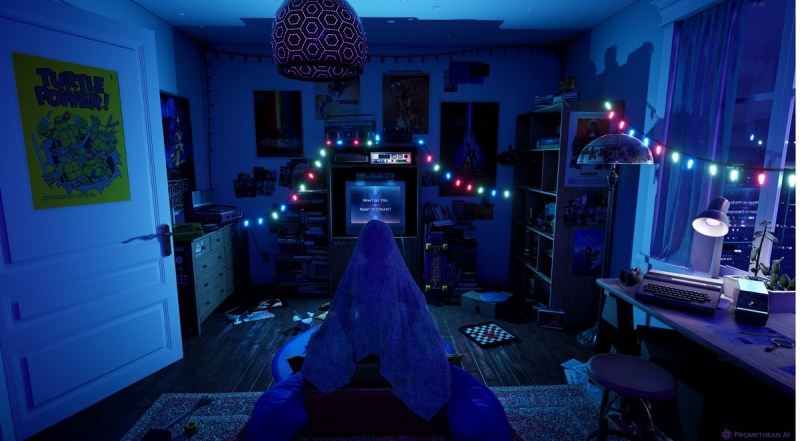 Above: Did a human artist create this scene?

“You are never locked into a particular mode of operation with this technology,” Maximov said.

Promethean AI already has a minimum viable product, and the team is currently working closely with game studios on deploying the AI in production as part of its early adoption program. Maximov said the company is talking with game outsourcing companies about using the tool. 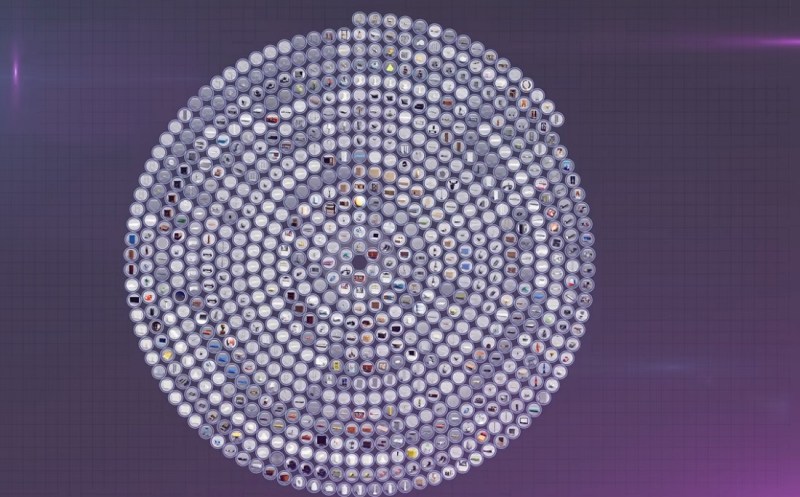 Above: Here’s an example of the kinds of assets that Promethean AI could insert into a scene.

The tech is likely to go well beyond the game companies as well. A movie company in Los Angeles is using the tech to convert movie scripts into visual scenes, so the movie makers can quickly get a sense for what a movie set might look like for that particular script. They can ask Promethean for “asset variations” for a desk and it will come up with the choices.

“Everyone who builds virtual worlds can be a user and trainer of this AI,” Maximov said.

Artists have a lot of objects to choose from in the Unity and Unreal asset stores, where game artists can purchase objects created by others. But there’s nothing that automates the process of taking that art and populating it into a massive game, Maximov said.

Promethean AI is building more demos, like how to populate scenes in virtual reality.

“Our focus was to make sure that all the companies that create their own custom technology are not forced to redo the same thing over and over again,” Maximov said. “It’s all about creativity and the creative flow.”