Netgear is introducing a family of four new routers that makes the migration to Wi-Fi 6 networking easy.

These devices will help households that are dealing with an increasing number of connected devices and an increasing demand for greater bandwidth from streaming video, audio and online gaming.

Home users are also adding smart home devices such as internet cameras, voice assistants, smart thermostats, and appliances, all of which are dependent on a constant connection to the cloud. These devices just increase the complexity of a network as they compete for bandwidth, pushing wireless home networks beyond the technical threshold for the current generation of Wi-Fi.

Netgear’s Wi-Fi 6 routers deliver up to four times better performance than Wi-Fi 5, or 802.11ac. The new routers use Orthogonal Frequency-Division Multiple-Access (OFDMA) to help maximize the capability to connect multiple devices at the same time, which will help reduce the congestion for the typical bandwidth-starved connected home.

Wi-Fi 6 will provide a huge boost in total network capacity and reliability, and should improve speed, performance, and capacity for wireless home networking. The actual quality of the connection for each Wi-Fi device will also be improved by reducing the interference between them, thus reducing lag or buffering during online gameplay or streaming of Ultra HD 8K/4K content.

With the introduction earlier this year of new smart phones and laptops that have embraced Wi-Fi 6, and with widespread industry support, it is expected that Wi-Fi 6 will be adopted much more quickly than previous iterations of the wireless networking technology.

As time progresses into 2020 and beyond, the market will continue to see many more devices introduced that support Wi-Fi 6. Additionally, given that Wi-Fi 6 works on both 2.4GHz and 5GHz band and is 100% compatible with previous generations of Wi-Fi, upgrading to a Wi-Fi 6 router now will ensure that your network is set for years to come.

“While previous Wi-Fi iterations have been largely about improvements to speed, Wi-Fi 6 promises a number of other benefits such as lower battery consumption and most notably increased capacity and reduced latency,” said David Watkins, director of the Intelligent Home Group for Strategy Analytics, in a statement. “The average North American home today has 10 Wi-Fi devices and this figure is set to grow significantly over the coming decade as consumers adopt more Smart Home devices. The enhanced capacity of Wi-Fi 6 will ensure that consumers experience great performance across all their devices even as those devices demand more data from ever richer media services.” 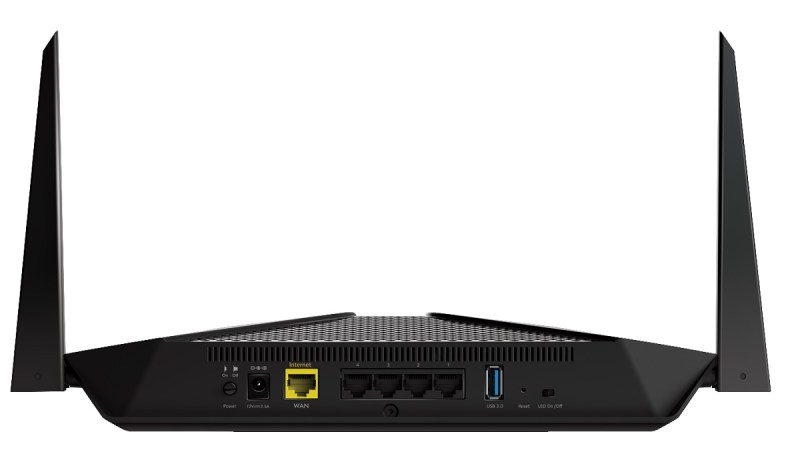 Above: Netgear’s Wi-Fi 6 routers are upon us.

The models include the Nighthawk AX4 4-Stream AX3000 (RAX40), which sells for $200. It will be available in April, and it features combined Wi-Fi speeds up to 3Gbps and an AX optimized dual-core processor that powers smart home automation, ultrasmooth 4K UHD streaming, online gaming, and more. It also has four-stream Wi-Fi with up to 600 + 2400Mbps for ultra-fast wireless speeds, and it has a dual-core processor ensures smooth 4K UHD streaming & gaming. And it has powerful amplifiers for network coverage throughout medium size homes.

The second model is the Nighthawk AX8 8-Stream AX6000 Wi-Fi 6 Router, which is available now for $400. It has Wi-Fi speeds up to 6Gbps with an interesting design: It can support eight Wi-Fi spatial streams — four in the 2.4GHz band and four in the 5GHz band, offering four times the device capacity compared to typical 2×2 AC Wi-Fi. It has Multi-Gig Internet, which enables customers to get more than one Gbps of internet speed by using aggregation.

The third model is the Nighthawk AX12 12-stream AX6000 Wi-Fi 6 Router (RAX120), available in April for $500. This 12-stream router offers combined Wi-Fi speeds up to 6Gbps and an AX-optimized 64bit 2.2GHz Quad-core processor. It is aimed at delivering 4K/8K Ultra HD streaming, gaming, and the smart home experience. As the only router with 8 streams on 5GHz, it promises better range and reliability with all devices. Its built-in 5Gbps Multi-Gig Ethernet provides powerful connectivity options.

And the fourth model is the Nighthawk Tri-band AX12 12-stream Wi-Fi 6 Router (RAX200), available in May for $600. It offers the fastest Wi-Fi speeds with a combined speed of up to 10.8Gbps. This router also supplies 2.5Gbps Multi-Gig Ethernet that can be used for LAN or internet connectivity.