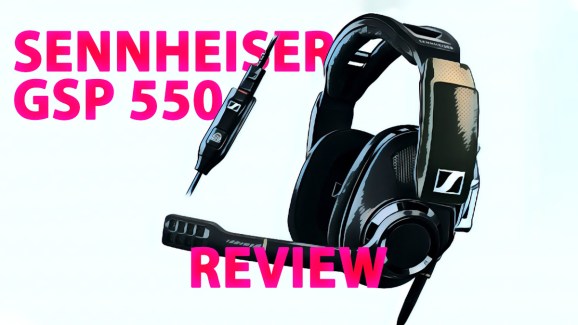 Sennheiser has a reputation for creating top-of-the-line audio products, and it’s spent the last few years trying to bring that into gaming. While companies like Astro and Turtle Beach may come to mind for most gaming fans first, that’s primarily due to marketing. Sennheiser’s products are often much better, which is something I discovered when I reviewed its excellent PC373D headset.

At the end of 2018, the company rolled out its high-end GSP 550 headset. It is available for $250, and it works with the PC (although you could also connect it to a PlayStation 4). This is the latest entry in Sennheiser’s GSP lineup of gaming headsets, which are all excellent. But unlike the GSP 500 and 600, it comes with the company’s Dolby surround-sound dongle.

With the help of Dolby, Sennheiser is promising virtual 7.1 surround sound. But that is only part of what makes GSP 550s great for gaming.

The GSP 550 excels at gaming audio. Even in standard stereo, the open-back speakers create an enveloping sound stage that bring games to life. The open speakers enable audio to feel like it is filling up your room.

The quality of this effect was especially noticeable when I was emulating Super Nintendo and Genesis. As a kid, I played those games on a CRT with terrible speakers. The GSP 550 made it feel like Yuko Koshiro was blasting the Streets of Rage soundtrack inside my office.

Of course, you’ll get the most from the GSP 550 when you’re using modern content. You’ll want to ensure you download the Dolby surround-sound software from Sennheiser, and you’ll need to configure the speakers as a 7.1 device in your Windows sound settings. Once you have everything set up, though, the headset immerses you in positional sound — as long as you’re playing something with a 7.1 audio track.

You can do virtual surround on stereo headphones with software. But when after some comparison, I prefer Sennheiser’s Dolby dongle over Windows Sonic or Dolby Atmos. Although, it’s not some massive improvement over those solutions.

The GSP 550 is a big headset, so it’s surprising that it is also a pleasure to wear. Sennheiser has done a lot of work to ensure that you can wear its GSP devices for long periods of time.

For the earcups, it is using a soft, padded fabric that feels nice against the skin. And then to ensure consistent pressure, Sennheiser built an adjustable hinge system. This adjusts where on your head the GSP 550 squeezes to stay in place. I was able to find a setting that kept the device from sliding around without digging into my skull.

Another great thing about Sennheiser is that it doesn’t skimp on microphones for its gaming headsets. That’s also true here. The GSP 550 has a noise-cancelling mic that sounds really clear.

It’s right on the cusp of something I would use for Twitch, which means it’s more than enough for communicating with friends on Discord. I also like how loud it is. You can talk at a really low level, but the mic is going to pick it up no problem. This is great for playing late at night when you don’t want to wake everyone up.

The most annoying thing about the GSP 550 is that it’s difficult to put away. It is bulky, and you’ll definitely notice it sitting off to the side when you’re not using it.

Everything about the GSP 550 looks a bit swollen. The microphone arm is thick. The sideplates are chunky. And the top brace looks a bit inflated.

Again, you won’t notice all that when it’s on your head, but you’re not going to have an easy time stuffing this thing in a drawer.

The only other problem is that you may adjust the microphone and end up muting it. Typically, you mute the mic by putting it into its upright position. This is convenient, and I like it. But the issue is that the mic clicks into mute about half way up.

I’ve found that trying to adjust the mic to get it away from my nose or beard has activated mute. And even worse is that I don’t know I’m muted until I notice other people are not responding to me.

The best solution to this is to keep the mic extended whenever you need it. But it’s still occasionally frustrating.

Sennheiser deserves its reputation for making excellent headsets, and the GSP 550 is further evidence of that. If you’re in the market for a $250 headset for your PC, the GSP 550 is at the top of that category.

Sennheiser’s GSP 550 is available now for $250. Sennheiser sent us a sample unit for the purpose of this review.