Demand for augmented reality and virtual reality jobs skyrocketed in the games industry in the past five years, but that growth has tapered off as consumer demand for those new technologies has been weaker than expected, according to a study by job site Indeed.

Indeed is one of the largest job web sites in the world, and it has turned its attention once again to its data related to job postings in the game industry and search queries by job seekers. (See the original data from our 2017 story, “Where in the world are the game jobs?” and another one from last year.)

Indeed said that with billions of dollars flowing into the video game industry, gaming is no longer just for kids — it’s poised to be the next generation of entertainment. Due to the market’s astonishing growth, streaming giant Netflix now sees gaming as a bigger competitor than the original video titan, HBO. 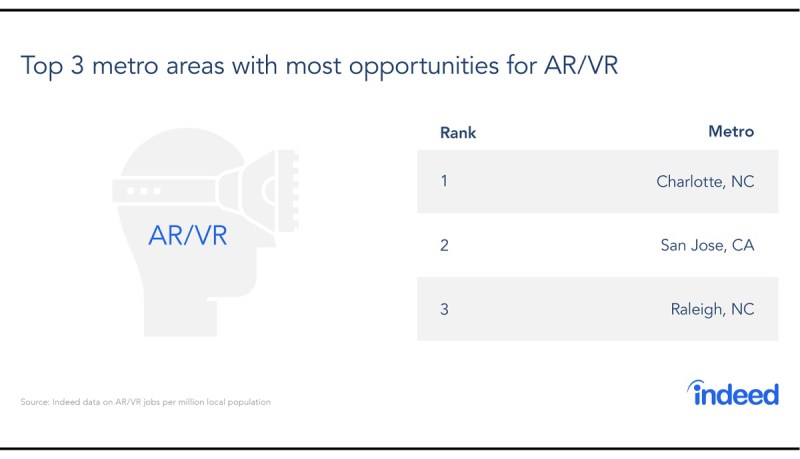 Above: North Carolina has the most postings for game jobs.

Indeed looked at what’s changed since last year’s report and where the most opportunities and interest are — both in terms of available positions and geographically, as the industry expands beyond typical tech hubs. It found the top area for AR/VR jobs is Charlotte, North Carolina, followed by San Jose, California and Raleigh, North Carolina.

AR/VR segments of gaming — which immerse players in a simulated reality or allow them to interact with lifelike environments — are still on the rise, continuing a growth trend from last year’s report. While VR/AR technologies are common in education and health care, their widespread adoption for recreational use is only just starting to take off. (Sony reported it has sold 4.2 million PlayStation VR headsets to date. That is an impressive number, but far lower than initial forecasters predicted and far lower than the overall sales of the PlayStation 4 game consoles at 91.6 million).

Indeed data shows the number of searches made closely aligns to the overall number of AR/VR positions available, which is good news for job seekers. But Indeed was surprised that the top cities for the jobs has shifted beyond the traditional tech hubs to places like Charlotte.

Charlotte is home to the largest percentage of AR/VR job openings nationwide (9.5%), as well as the highest local concentration of these positions. In other words, more AR/VR jobs are available in Charlotte, relative to other fields, than in other places.

Esports is a promising growth area

Although still relatively new to the market, esports is a booming segment, with revenues projected to top $1 billion globally in 2019. These competitive video games pit players from around the world against one another and have evolved into a full-on spectator sport; tournaments are even broadcast on traditional sports hub ESPN.

Four cities currently dominate the esports job market in the U.S.: Los Angeles, Houston, New York, and San Francisco. Just under half of all esports job postings nationwide are in these metro areas, with the other 50% dispersed across the country. That matches my impression of where the big companies are, as Riot Games, Blizzard Entertainment, and Activision are all based in the Los Angeles region.

It will be interesting to see if — or how — the geography of esports jobs changes over the next few years. For instance, Comcast’s $50 million esports arena in the U.S. will open in 2021 in Philadelphia.

What’s more, esports viewership is projected to jump nearly 70% by 2023, indicating significant expansion in employment opportunities over the coming years to keep up with demand. While the number of searches for esports jobs currently outpaces the positions available, with interest jumping nearly 20% last year, we have reason to believe that opportunities will soon expand as well.

Fewer jobs for developers and designers, but new interest in other areas 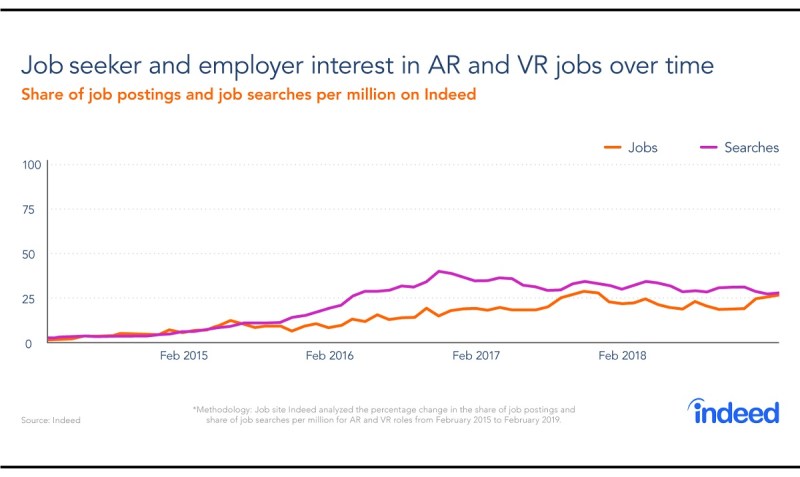 Above: AR/VR game jobs over time.

Although esports, AR and VR will continue to boom in 2019, the outlook is potentially less rosy for some video game studios, as many take big risks in an attempt to keep pace with this changing technology. Multiple large studios closed — some quite unexpectedly — in 2018, and the trend continued in the first months of 2019 with several large-scale layoffs.

Indeed found the number of designer job postings dropped 54% in the last five years, and developer openings fell 35% in the same period, continuing the downward trend in both gaming fields. In contrast, searches for AR/VR internships are up 1,220%, showing that rising talent is looking to get a foot in the door. 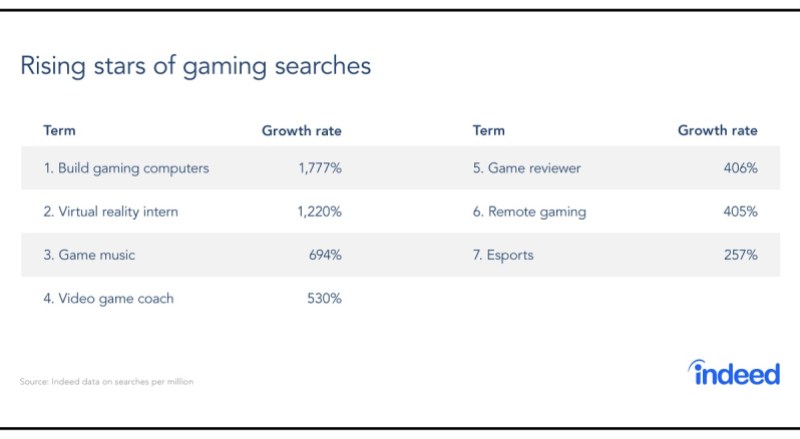 Above: The hot categories for game job searches.

This could relate to the spike in searches for other jobs in the gaming world. In a surprise twist on the recent move toward online games, searches for jobs building gaming computers had the biggest jump on the list, rising 1,777%.

In other trends, searches for video game coaches jumped a whopping 530% in the last three years, and searches for game reviewers are up 406%. These might sound like fantasy jobs that allow people to get paid for their gaming hobbies, but why not love what you do?

Meanwhile, searches for game-tester positions continued to decline by nearly 45% over the last three years. Searches for game analysts and user researchers also dropped significantly: over 60% during the same period.

When it comes to opportunities in the gaming industry, Indeed said it is time to look past the usual suspects of Silicon Valley and even the West Coast. As the industry has expanded, new hotspots are emerging, particularly in the South.

For example, gaming opportunities are so plentiful in Austin, Texas — which is now home to over 6% of all jobs for game designers and developers nationwide — that the University of Texas is launching a formal video game curriculum.