Last week, I made my way to the Microsoft Reactor in San Francisco for the VR Arcade conference. I moderated a panel on investing in virtual reality, augmented reality, and mixed reality. It was a far different environment for that kind of conversation than in 2016 or earlier.

The event itself represented a pivot. Since consumer VR hasn’t taken off as much as expected, companies have shifted gears in augmented reality on smartphones or the VR arcade market. We are holding our own GamesBeat Summit 2019 conference on April 23-24 in Los Angeles at a “micro-amusement park” dubbed Two Bit Circus. Such places are sprouting up all over.

Do these VR arcades represent a good investment, or are seasoned investors looking into other opportunities. We asked that question on our panel. 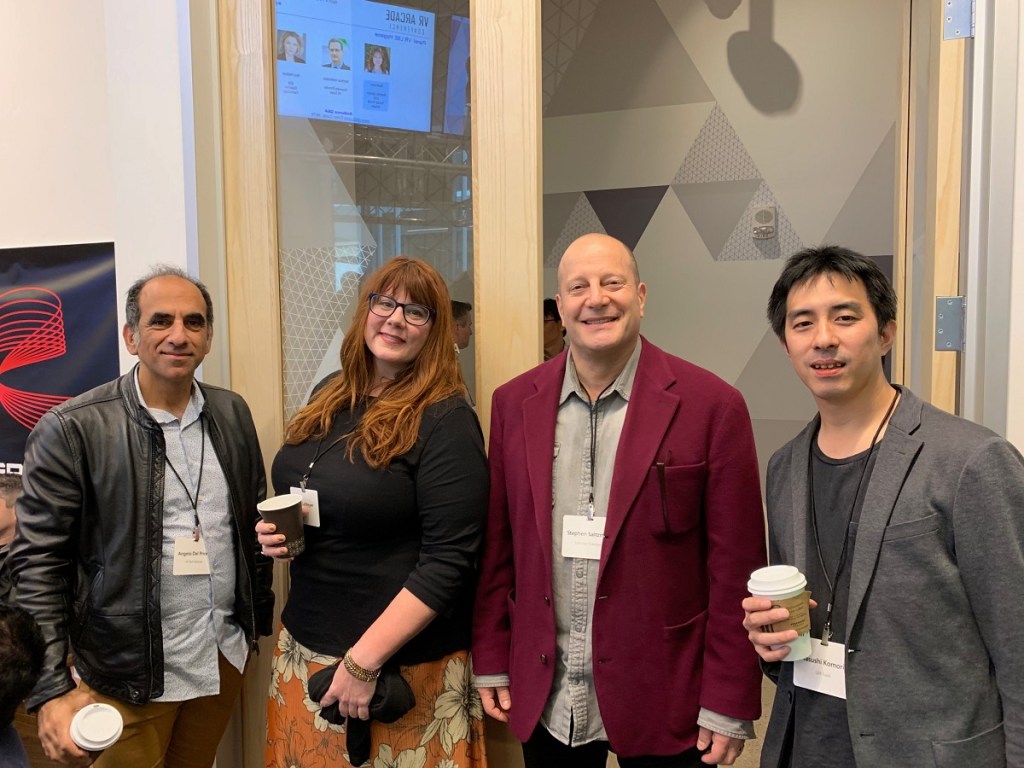 Stephen Saltzman: I first got into VR when I was at Intel Capital. I became managing director for VR, gaming, and location-based entertainment investments at Intel Capital. Starting in January, I became founder and principal and sole employee at Saltzman Strategies and Alliances, which is a consulting firm.

Yasushi Komori: I’m at GFR Fund. We started looking into the VR area three years ago. On the whole, we’re an entertainment technology-focused fund, so we’re also looking into esports and other areas.

Angelo Del Priore: I’m at HP Tech Ventures, where we do VC investments for Hewlett-Packard. I focus on the AR, VR, gaming, and education spaces. Our last investment in the space was Mojo Vision.

GamesBeat: Can you talk about some of the more interesting investments you’ve gotten into?

LaMeyer: One that’s somewhat potentially relevant to this space is Tribe XR. You can learn how to DJ in virtual reality. You have an array of equipment in the virtual space, and with that hardware you can actually DJ. They’re working on other experiences as well, but they’ve started with DJing.

Saltzman: My last VR investment for Intel was SoReal. Sam Wong’s been on a few of the panels at this conference. After spending two years analyzing location-based VR, I thought it was not only the most exciting approach, but also the smartest business model. It’s showing th power of the founders, because of their position in the Chinese entertainment industry. They can get other people to build out their experiences for them.

Del Priore: We don’t actually announce a lot of our investments, because why would we want our competition to know? [laughs] Mojo Vision hasn’t even announced what they’re doing yet. But I would say that you can look at who we’ve partnered with and get an idea of where we’re going. We’re ready to build another side of VR. 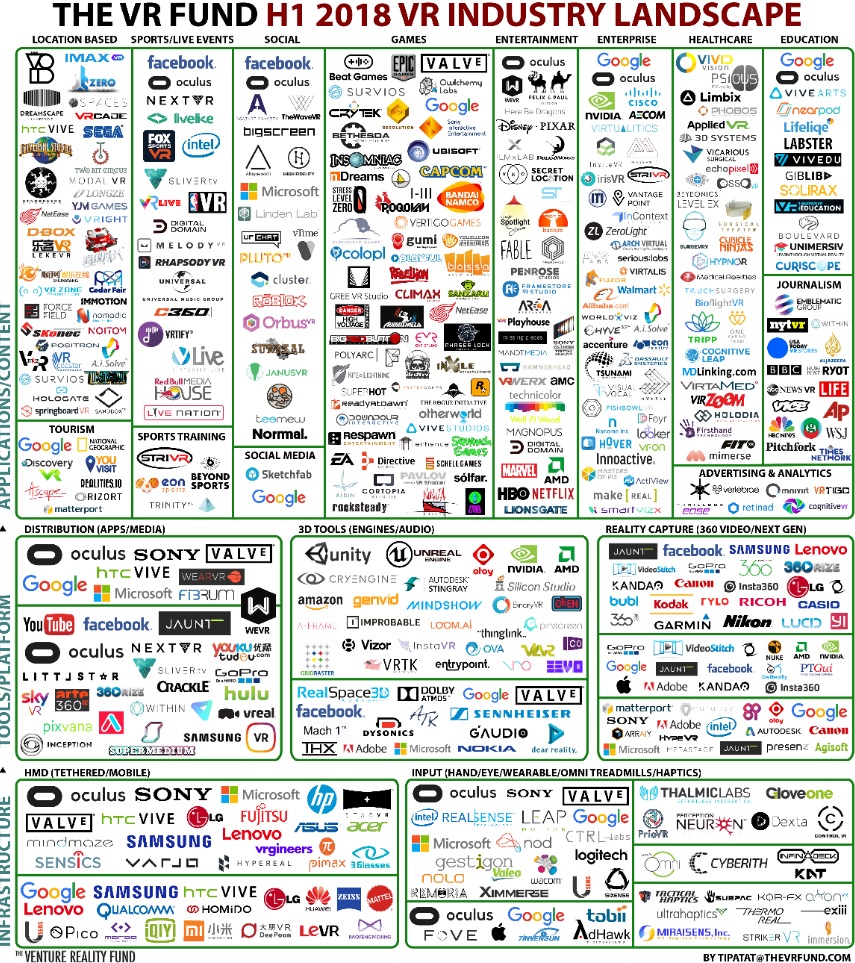 Above: The VR Fund’s VR industry landscape for the first half of 2018.

GamesBeat: And you did invest in the Venture Reality Fund, right?

GamesBeat: We’re in the gap of disappointment or trough of disillusionment? One question is, how is today different from 2014 or 2016? What expectations should startups have when dealing with investors now?

Del Priore: You’re going to face some tougher, more pointed questions that go really in-depth about your business and the economics. How is it going to play out? I was a VP of biz dev at a startup, and I know the financial situation could change tomorrow, but I still, before I write that check–I’m going to go through line by line asking, “What is the rationale for this?”

An example I always use, say you want to sell to doctors at hospitals in the United States. Okay, how many hospitals are there in this country? How many doctors at each hospital? You have to be able to answer those basic questions. Once you have the money, you’re in control.

GamesBeat: Also why are you still investing in VR when you could be doing esports or blockchain games or other things?

Del Priore: Well, we do other things too. We’re corporate strategic, right? I need to make money and gain strategic insights and optionality. HP has a VR business where there’s now a VP in charge of VR and AR. He’s pointing me toward areas that are interesting, and I’m going out–from a strategic perspective, if you’re an amazing technology with some IP or other thing that I don’t have, because we’re not all working 80 hours a week without layers of bureaucracy–that’s why I’m doing it. That VP wants us to double our share in gaming and double our share in VR. I can help him do that by investigating different companies in the space.

Saltzman: For me, the big difference between 2016 and now is that the tourists are gone. If somebody is still investing in VR now, it’s because they actually understand it. They’re compelled by it. Whether it’s entertainment or medical training or industrial design or architecture, anything where you have to think in 3D, it’s more natural to do it in VR than it is with a keyboard and a mouse, flat out. The people who are still around and actively investing, it’s because they understand it. They totally get it.

What that means, with the tourists gone, is you don’t have absurd deals going on at crazy valuations. A lot of startups think those crazy valuations were a good thing. They weren’t. The protections, the downside protections built into those mean that you get washed out on the next round when you can’t support the valuation that your Series A came in at. It’s much healthier for the entrepreneurs as well, when you’re in this kind of environment where people can pay a fair valuation and then grow organically and add value more naturally.

Komori: As we all know, the market growth has been smaller than expected, but we’ve seen some companies that have still been very successful. They tend to be the ones that have focused on building virtual worlds for entertainment, platforms that can bridge both PC and virtual reality. That kind of cross-platform entertainment seems to be where the market is going.

LaMeyer: The other thing that’s pretty obvious is that we’re coming into the second generation of hardware. We’re getting closer to a cost and a comfort level that can reach more of a mass market. 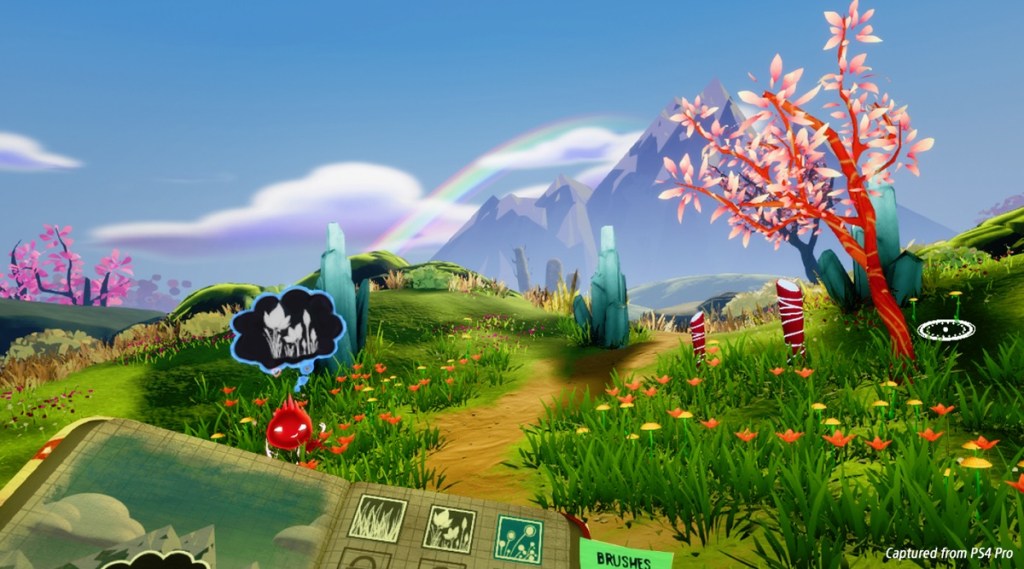 Above: Concrete Genie is coming for the PSVR in the fall of 2019.

GamesBeat: How do you look at location-based entertainment and VR arcades as investment within this larger VR and AR space? It almost seemed like a lot of these sprung up as the pivot for the original VR companies. When consumer VR didn’t take off as well as expected, people figured that the arcades would take off. What do you think about this space and that pivot strategy?

LaMeyer: It’s been a way to get more people to try virtual reality who hadn’t before. Yesterday we were talking a bit more about different generations trying VR and having more fun with that. I’d expect it to work in that way as well.

Saltzman: One of the biggest aspects is, people who actually think they’re in a VR business are going to fail. VR is a technology. Nobody successful was in the dot-com business. They were in the bookselling business or the travel business. If you understand the customer and what you can do for them and how that’s genuinely helpful, that’s great. VR becomes a tool toward doing that.